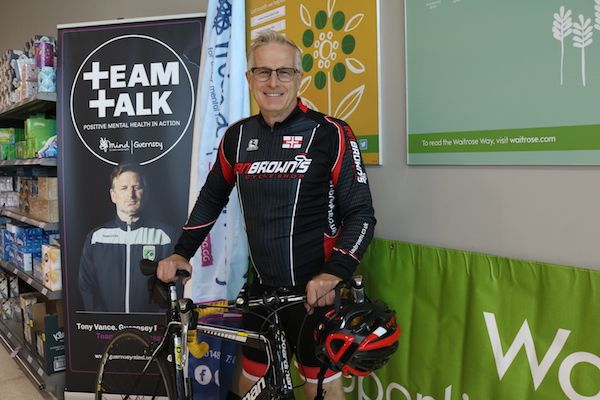 The Branch Manager at Waitrose Admiral Park, is starting a charity challenge today, which will see him cycle from Land’s End to John O’Groats to raise money for Guernsey Mind and Cancer Research.

Ian Burdekin will be joined by two colleagues, Andy O’Keeffe and Rhys Evans, from Waitrose branches in Chandlersford and Southampton.

Together they will be cycling the 1,100 miles starting at Land’s End today - the south-westerly tip of England - through Cornwall, Dartmoor and north along the Welsh border, skirting the Lake District into Scotland, via lochs and the Highlands to the North Coast - until they reach the finish line at John O’Groats, the most northerly tip of Scotland.

This is the second time Mr Burdekin has taken part in the challenge. He first completed the cycle in 2007 in memory of his father who sadly passed away from cancer. Last year his brother also passed away from cancer and so he is taking part again this year to raise money for two charities; Guernsey Mind and Cancer Research.

Mr Burdekin said previously: “The 13 day cycle is going to be tough but is something I’m really looking forward to. Having already covered the distance I know what to expect. Other than the physical challenge, the countryside along the way is spectacular and I’m sure the support from everyone will help us reach the finish line. We will be cycling under the team name of AIR, the first letters of our names: Andy, Ian and Rhys.

“Each day we will be cycling an average of 85 miles so we have been training hard to make sure we are as prepared as possible. Despite this I’m sure there will be a lot of physical and mental barriers to overcome along the way.”

The Land’s End to John O’Groats Cycle challenge starts today, Saturday 12 May and is due to finish on Thursday 25 May.

Waitrose stocked up on loose veg

Bowls in the aisles for medal winning Waitrose Partner