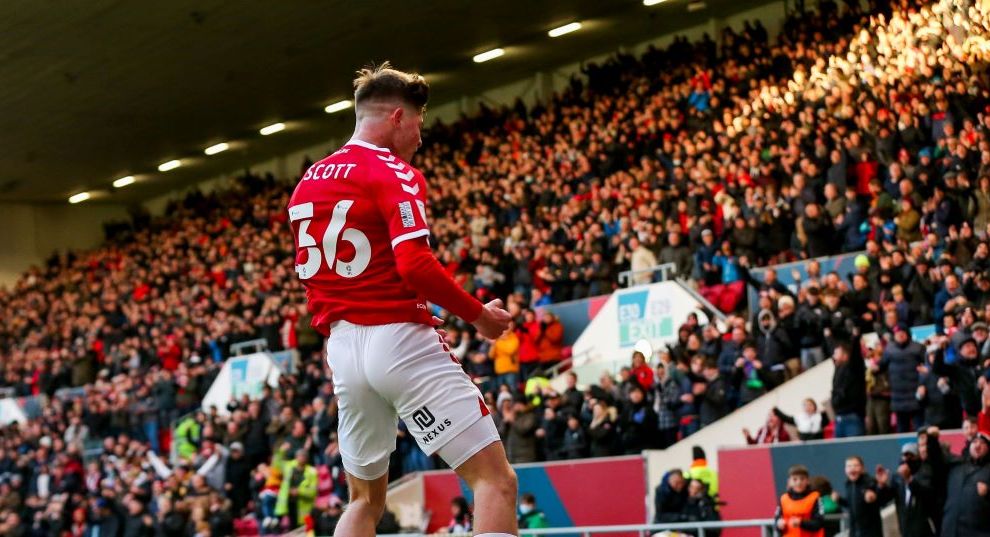 Guernsey teenager Alex Scott scored the only goal as Bristol City beat Derby County 1-0 in front of more than 18,000 people in the Championship yesterday.

Scott, 18, was named man of the match after his first-half strike from the edge of the penalty box gave City the three points. It was the second goal in senior professional football for the former St Martin's and Guernsey FC player.

"I got a bit lucky with the bounce and I just hit it sweetly," said Scott of his match-winning goal in the 16th minute.

"The three points are the most important thing. This is our home and we wanted to show [Derby County] how aggressive we could be. At the start of the season, we struggled a bit. The last few weeks, we've been brilliant at home and seeing games out we're a lot more comfortable."

Scott has quickly become a favourite among City's fans and Scott praised their support. "They've been brilliant and we're really grateful for that," he said.

Video: Alex Scott, who signed his first professional contract in March, offered his thoughts immediately after the match.

In its match report, Bristol Live was effusive in its praise for Scott.

"City’s match-winner claimed his second senior goal and it was some strike, but also hit almost effortlessly so clinical was the teenager’s technique," they said.

"As the ball broke to him on the edge of the area, Scott applied just the right power, precision and spin with his left, and it’s pretty obvious that he doesn’t have a weaker or stronger foot.

"It was a goal seeped in confidence from a teenager just 17 games into his professional career and it’s right to have conversations about how high Scott’s ceiling is. Consider any City prospect of the last five, 10 or whatever years and where they were at that age at that specific stage of their career, chances are they weren’t at his level."

Video: Alex Scott's goal was the second of his senior professional career with Bristol City and his first in a match they won.

Having failed to win their opening seven home league matches of the season, City, owned by Guernsey-based billionaire Stephen Landsdown, have now won three of their past four at Ashton Gate, their home ground.

Pictured: Bristol City are 17th in the Championship. Their next league match is away at Hull City next Saturday.

Before the match there was a minute's applause for former City coach John Sillett, who died on Tuesday aged 85. His son, Alan Sillett, lives in Guernsey and runs the Duke of Normandie Hotel. There were tributes to Sillett across the professional game yesterday, especially at Coventry City, the club he led to FA Cup glory in 1987.