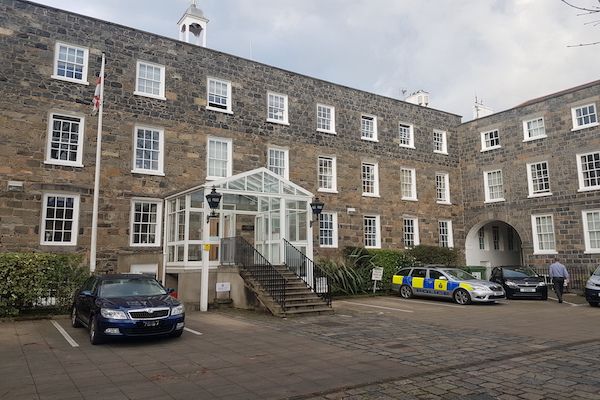 Mark Gill was arrested during a social media campaign run by Guernsey Police in November, when he allegedly took a knuckle duster and a combat knife into the reception area of the police station.

The 43 year old was arrested and charged with possession of offensive weapons and also assaulting a police officer and using threatening or abusive words and behaviour against the officer.

The welder had been arrested during the #tweetonthebeat social media campaign run by officers during December, to show what happens during a typical shift. This came just weeks after the end of a national weapons amnesty which Guernsey Police took part in.

We’re just about to kick off our 12-hour #TweetOnTheBeat. Between now and 3am tomorrow we’ll bring you live updates of work being carried out across Law Enforcement. Today is an ‘action day’ (a focused day of activity out in the community) so there should be lots going on. pic.twitter.com/xbMRXzcHvU

On Monday 15 January Mr Gill appeared in Guernsey's Magistrate's court where he faced four charges all related to his attendance at Police Headquarters on Friday 15 December, 2017.

The charges are possession of a knuckle duster, without lawful authority or reasonable excuse; assault of a police officer; using threatening, abusive or insulting words or behaviour against that officer and possession of a large black combat knife.

The Magistrate, Graeme McKerrell, queried the size of the knife, saying he may have to commit the case to the Royal Court if it was likely to merit a prison sentence longer than 12 months. The prosecuting officer and defence lawyer both said it was unlikely to due to the size of the knife and where it was being held, which wasn't likely to pose a risk to the public.

The decision was made to adjourn the case sine die for a trial in the Magistrate's Court. Mr Gill was remanded in custody until then.