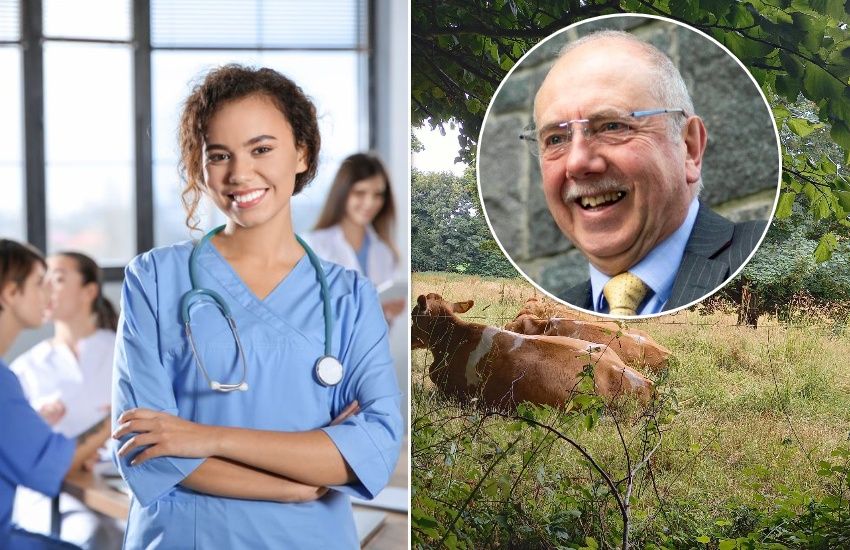 Politicians behind plans to build key workers' housing on a green field next to the Princess Elizabeth Hospital say it is too soon to know whether their scheme would provide additional housing for nurses or replace existing accommodation currently in use elsewhere in the island.

The States' Assembly recently rejected an attempt by seven deputies to block the scheme after the Committee for Health & Social Care made an impassioned plea for more key workers' housing to support the island's health services.

The Committee said it had 422 staff vacancies in the 12 months up to May 2022 and that there is enough demand for additional healthcare workers to fill another 150 units of key workers' housing immediately if the units existed.

During the debate, in a speech later described by some deputies as one of the best ever delivered in the Assembly, the President of the Committee, Deputy Al Brouard, pictured top, implored the States not to rule out building on the green field unless they "want to put cows to intermittently graze the field ahead of people who need to care for our loved ones". 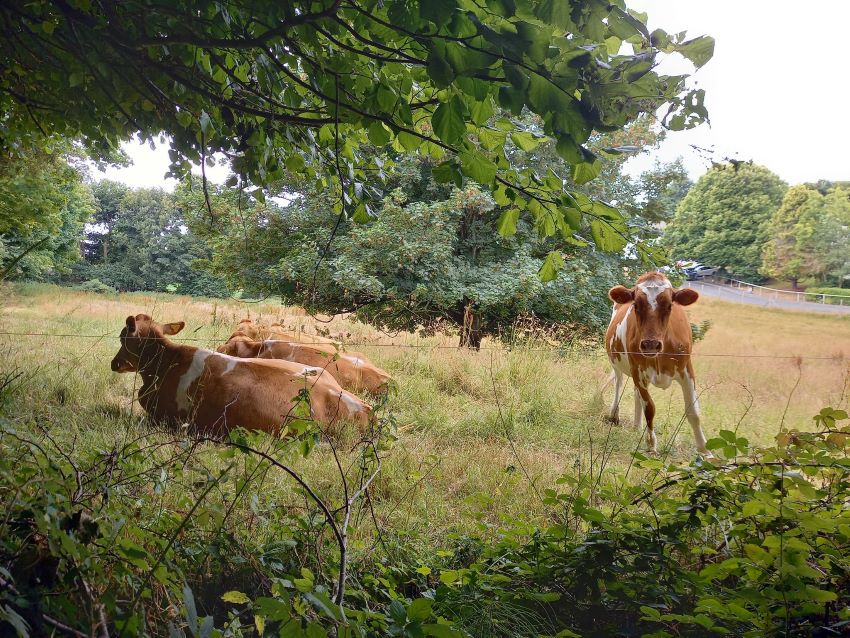 Pictured: The Committee for Health & Social Care does not yet know whether building on the field would provide additional or replacement key workers' housing or a combination of both.

Since the debate, Express has seen emails from a member of the Committee which emphasise that building key workers' housing on the green field would allow some existing units used by healthcare staff elsewhere to be vacated and removed from the island's stock of key workers' housing.

In one email, sent to a member of the public, a member of the Committee wrote: "The Committee currently uses 383 units of staff accommodation across 49 different sites, some owned and some rented. Having circa 140 units on campus will enable us to rationalise the units currently used, freeing some up for the local rental market. It's a win-win in terms of securing key workers on site and helping ease the pressure on local market rentals."

Deputy Brouard has since told Express: "At this stage, it is too soon to say with certainty whether any potential units on that site [the green field] will be all additional key worker accommodation, replacements for units elsewhere that aren’t suitable, or a mixture of the two. We need to carry out a detailed assessment before any plans are developed." 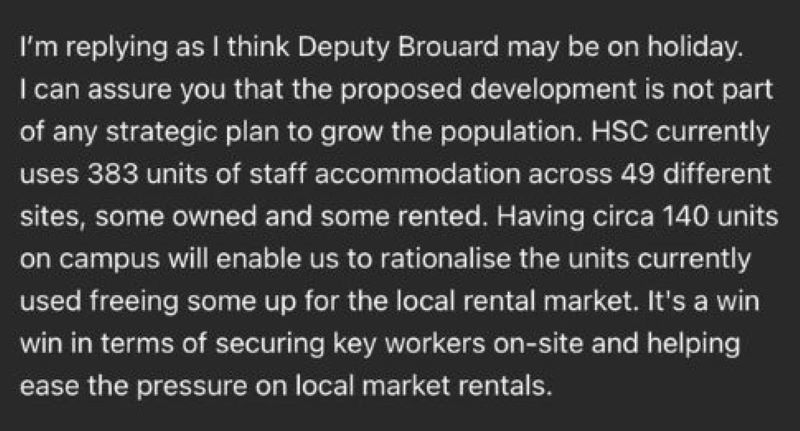 Pictured: An email reply sent by a member of the Committee for Health & Social Care to a member of the public who raised concerns about the green field building plan after the States debated it the week before last.

Some deputies who signed or supported the unsuccessful Requête to block the green field scheme and build on brownfield sites instead were surprised that the Committee could not guarantee that the scheme - if approved by the Development & Planning Authority - would substantially increase the number of houses or flats available to key healthcare workers.

"I was very surprised to hear that there is a possibility that none of the planned additional 140 flatlets will add to the overall stock of accommodation available to key workers in healthcare," said Deputy Yvonne Burford.

"In his impassioned speech in the Assembly, the President of the Committee, Deputy Brouard, painted an Armageddon scenario of ambulances queueing for hours in the future due to a shortage of key workers' housing. He said that additional housing was needed urgently and the valley field was the only option. There was mention of some private sites in the community being freed up which, of course, would be a good thing." 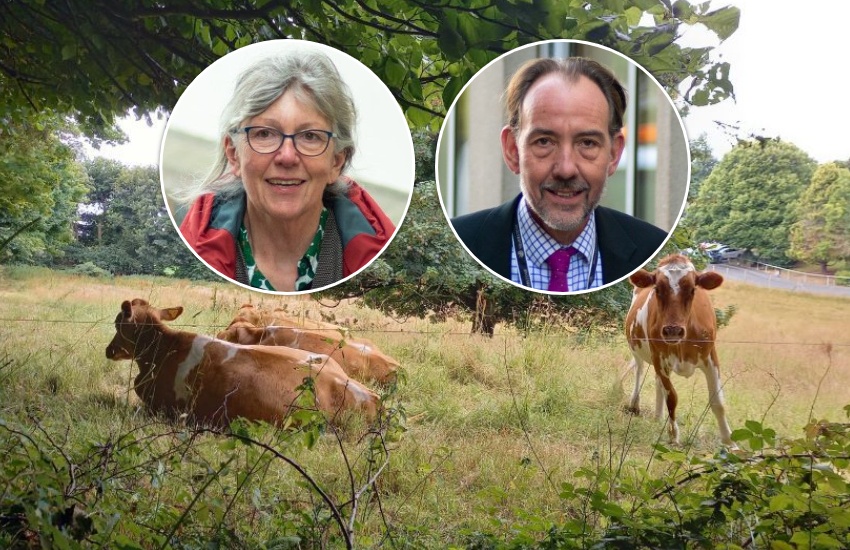 Pictured: Deputies Yvonne Burford and Steve Falla have been prominent voices campaigning against the idea of building on the green field in the grounds of the Hospital.

Deputy Steve Falla, who led the Requête, and Deputy Heidi Soulsby, who signed it, said the Committee should have been clearer with the States when their motion was debated.

"The Committee's letter of comment does talk about the need to redevelop, refurbish or sell some of the existing stock and I understood not all the units would end up being additional accommodation. However, it was thought that the vast majority would be new as the argument has been that we have a housing emergency and need more key worker accommodation immediately," said Deputy Soulsby.

"I think the Committee could have been clearer that it had no idea at this stage the extent to which the build would represent additional units. The requérants did not make much of it as it was assumed that the vast majority of the units would represent extra accommodation. Saying all that, I don’t think it would have changed minds in the Assembly."

Deputy Falla said: "Given the gist of the message in the letters of comment and in speeches from those promoting the build, I understood it to be additional key workers' housing. I understand that some existing key worker accommodation is in poor condition, however.

"I think a whole lot more transparency from the start would have been welcomed. Great play was made about the lack of sufficient key workers' housing, which is correct, and the arguments from some were that health provision would suffer if additional housing was not built on the hospital grounds. This all tended towards the debate being around extra key workers' housing."

Deputy Falla's Requête was effectively defeated by an amendment proposed by Deputy Neil Inder and seconded by Deputy Mark Helyar. Their amendment, which was backed by the States by 24 votes to 15, led to a States' resolution directing that any key workers' housing on the field at the Hospital should be offset by spending up to £300,000 buying land of an equivalent size elsewhere to be converted into grassland for dairy farming. 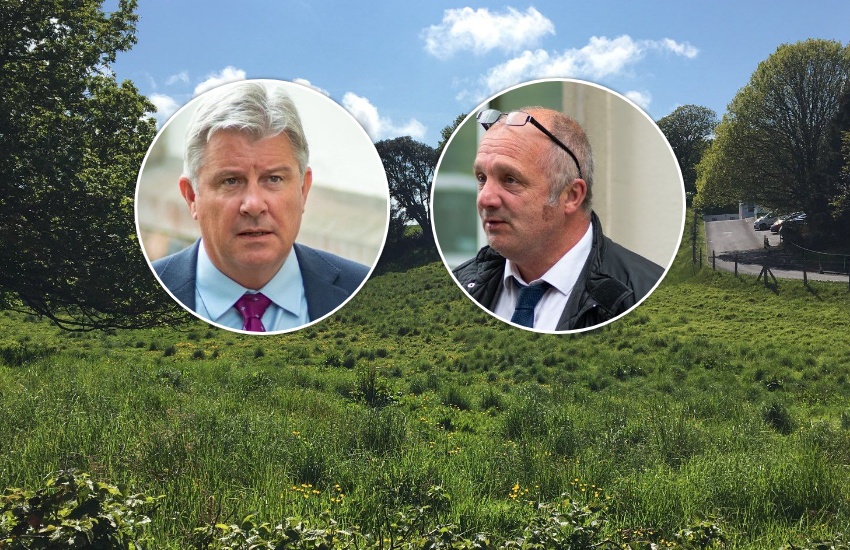 Pictured: Deputies Neil Inder (right) and Mark Helyar presented an amendment to 'offset' the loss of the green field at the Hospital by creating a new one elsewhere and their plan won the support of a majority of deputies.

The outcome of the States' debate means the Committee is free to work with the Policy & Resources Committee, which also backs the scheme, to develop building proposals further and submit a planning application to the Development & Planning Authority.

The Committee has told Express that it is too soon to say when a planning application will be submitted requesting permission to build on the green field, which is allocated as an Agricultural Priority Area in the States' Island Development Plan.

Deputy Soulsby believes that the planning application may be harder to justify and generate more public opposition if the final proposed scheme contains a high proportion of replacement rather than additional housing for key workers.

"I think it will make those who are against building on Agricultural Priority Area land more angry, but it may also make unhappy those who thought it was a price worth paying for what they believed was additional housing," said Deputy Soulsby.

"I think it will be difficult putting forward a strong case...based on the criteria used for selection of the site anyway, but it will be hard to claim that it is of strategic importance if it is for replacement housing." 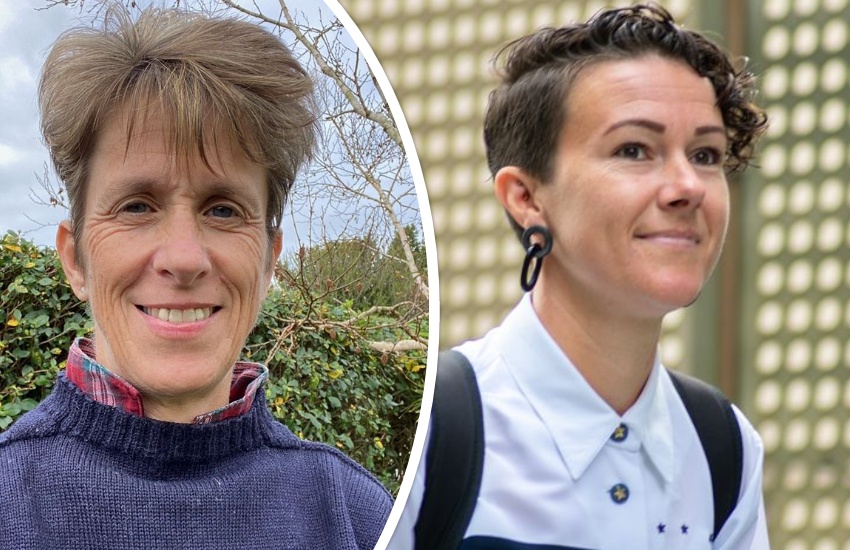 Pictured: The Vice Presidents of the Policy & Resources Committee and the Committee for Health & Social Care - Deputies Heidi Soulsby (left) and Tina Bury - are opposed to the majority of their colleagues and want housing to be built on brownfield sites rather than on the green field at the Hospital.

Deputy Burford said the outcome of any planning application remained "impossible to predict" and reiterated calls for the scheme to be dropped.

"It is a high bar. It requires robust evidence and the application will take time and money to prepare," she said. "I think that Deputies Brouard and David Mahoney [the Policy & Resources Committee's lead member on property] and the other proponents of building on the valley field underestimate the strength of public feeling on this issue and they should consider whether the time and money might not be better directed at brownfield options."

Deputy Falla said that many people in the island were extremely disappointed that the States defeated his Requête.

"I am approached by people every day who are firmly against building on the field and who feel very let down by the outcome of the Requête debate. I think the purpose or justification for building is secondary to that," said Deputy Falla.

"I don’t rule out further campaigning, but a [planning] application would provide the focus for Guernsey people who feel strongly about this to make their voices heard. Also, given that we’re now in the holiday period for many islanders when their focus is elsewhere, on balance I think that’s probably the right time."

HSC President tells deputies to choose between nurses and cows