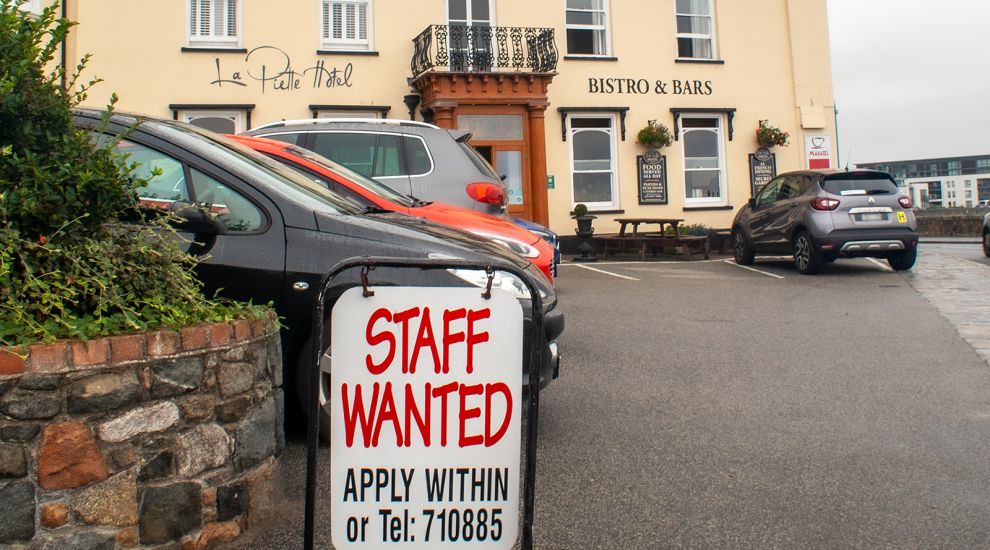 More and more businesses within Guernsey's hospitality and residential care sectors appear to be struggling with staff shortages.

As the summer has worn on, 'staff wanted' signs have become an ever-more common sight in pub, restaurant and hotel windows and just yesterday it was confirmed one care home will close for good next month.

According to those in the hospitality industry, there is a struggle to find good quality, reliable staff to fill roles, and that could be down to a number of reasons. 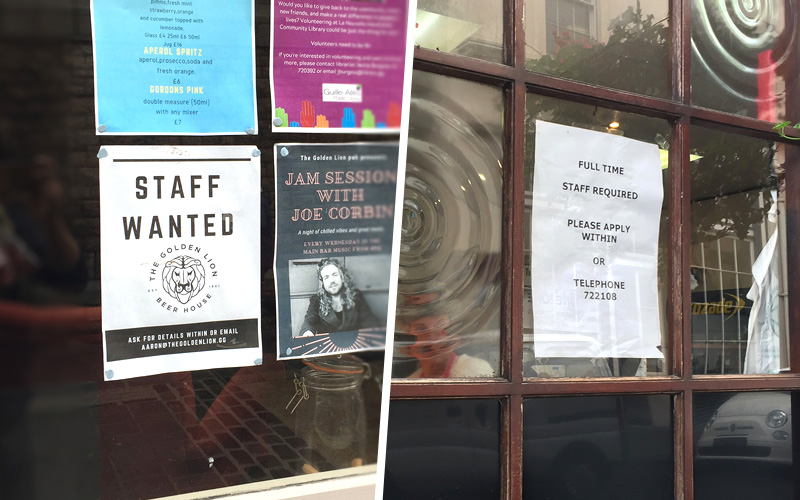 Pictured: Staff are wanted at the Golden Lion Pub and the Chip Inn on Fountain Street.

The manager of La Piette Hotel, Leoni Hunter, confirmed they were still looking for staff, "along with a lot of Guernsey", she said.

"The added complications and costs of the population law obviously don't help, but I just think Guernsey has lost the status of being somewhere people want to flock to work," she said.

"The Euro is much stronger now, and with all of the other national politics going on, you have to ask if people had the choice between Guernsey and the rest of the world, where would they choose to work? The island just isn't as attractive for workers from abroad anymore."

Ms Hunter said being short-staffed put pressure on the staff they did have, and mused that things may be heading towards breaking point. 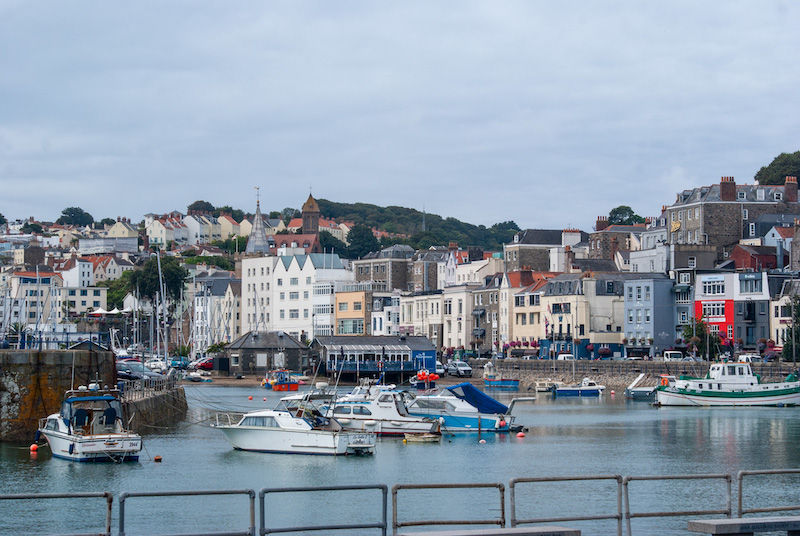 Pictured: Guernsey has previously relied on workers from overseas to fill jobs in hospitality. Many worked here and sent money home to their families.

Karel Harris, the Managing Director of Sarnia Hotels, said they are advertising for Restaurant and Bar staff as local students who had worked over the summer were returning to University.

"The population law may have caused some of the problems originally as many of the skilled hospitality staff left the Island at that juncture feeling that they were no longer welcome or appreciated. We tried to explain at the outset to the contacts we had in Housing/Population that many of our staff have no intention of settling here long term – they work to send money home to build houses, or support family members at home," she said.

"Also like most hotels and many restaurants we accommodate our staff in staff houses ensuring we do not have an impact on the local housing sector. Hospitality is a growing industry worldwide and there is a demand for well trained and multilingual staff so many of our previous employees will have moved on to the UK, or perhaps the Cruise sector or returned to their home countries where the economies have picked up."

Ms Harris also echoed Ms Hunter's comments - Guernsey is just not as attractive as it used to be for workers. And these two hotels are not the only businesses looking for staff. The Urban Kitchen in St Peter Port had to close months ago because of staff shortages, and despite promising to reopen on Liberation day, it now finds itself closed once again. 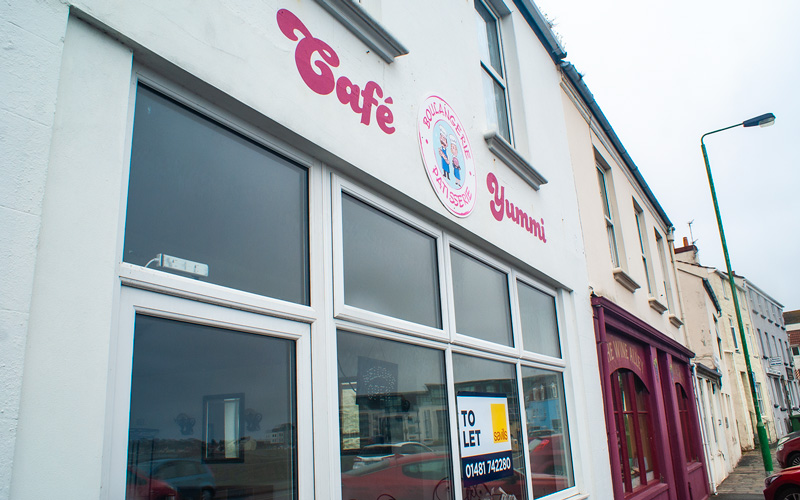 Pictured: Yummy Cafe at the Longstore.

Further to that, as Express reported earlier in the year, Cafe Yummi was struggling to find reliable staff. It has now closed down, apparently permanently.

"With sterling so low against the Euro," Ms Harris continued, "we are not a particularly attractive destination – no free healthcare, expensive flights back home and a personal tax allowance lower than the UK.

"On the other hand we have to push the safe and lovely environment, the lack of travelling time to work and the fact that accommodation and meals are provided, allowing them to save. Longer-term we have to look further afield for staff which will involve working with Immigration to try and process candidates faster – currently, it can take up to six months as original documents have to be sent backwards and forwards."

Ms Hunter added: "One of the main problems is finding decent candidates, people come but they don’t really want to work the hours, and because of that we have to pay a fortune to advertise the roles further afield. It is the first time we have had to that, it shows how much the industry is struggling really." 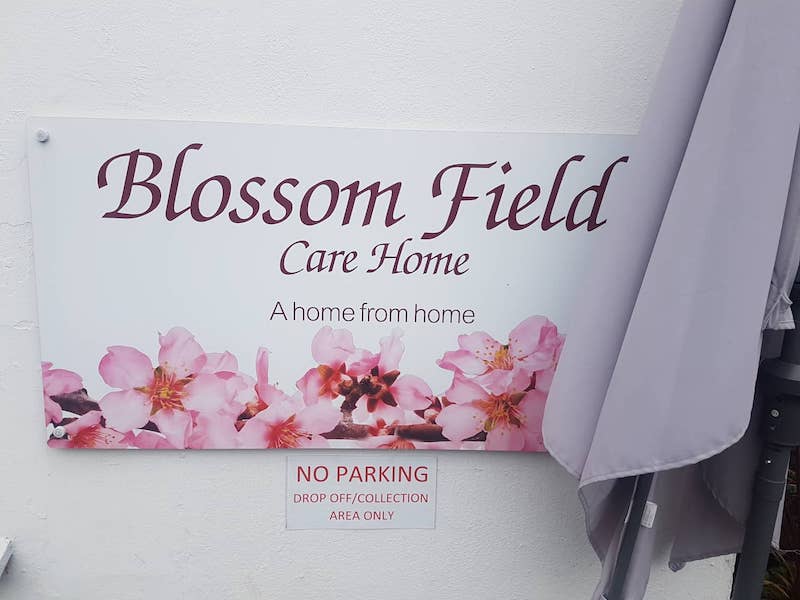 Yesterday it was announced that one of Guernsey's residential care homes is closing at the end of October.  The closure is being blamed on problems recruiting with the manager leaving and other vacant roles all needing to be filled.

Salvation could be on the horizon, however, depending on how much stock you put in the States of Guernsey.

The Committee for Home Affairs, and by extension, Population Management, confirmed to Express that it was aiming to finalise and publish its strategic review of the population law next month. Depending on the result of that, businesses could find it is a turning point to help make Guernsey more attractive for people looking to come and earn money for their families once again.