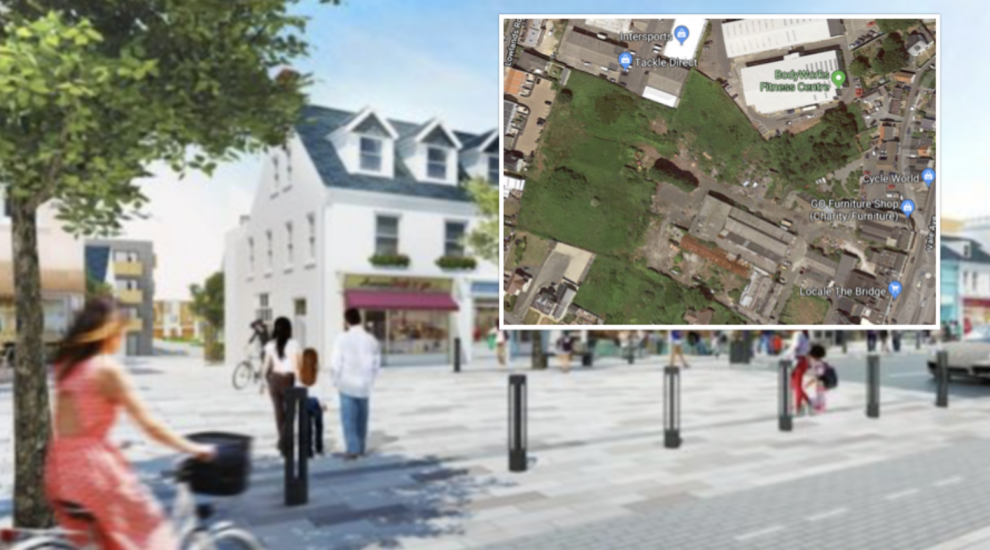 Leale’s Yard remains derelict, despite a development framework for the 12-acre site being approved last year.

The Co-op bought the site in St Sampsons more than ten years ago and has since committed to “building a residential-led development that will provide a variety of housing to meet local need”.

The proposed site included 410 new homes, 1.5 acres of new public ‘realm’, and an intention to turn the Bridge into a “vibrant new local centre.”

This seems particular pertinent at a time when Guernsey continues to suffer an ongoing housing crisis. So, what’s the latest?

Pictured: Plans for Leale's Yard heralded an opportunity to celebrate the "uniqueness" of the Bridge.

Updates from the Co-Op were requested last week but have not been provided, so Express turned to States Deputies, and in particular the Committee for Policy & Resources, which has included development at Leale’s Yard in the draft Government Work Plan.

“The Government Work Plan, which will be debated by the States Assembly this month, puts forward which recovery actions should be prioritised including the ‘top 10’ actions which it proposes to move forward in the coming six months,” said the Committee, in a statement to Express.

“Enabling regeneration and addressing the current housing pressures are both included in these actions.

“In both areas, a development at Leale’s Yard could play a significant role and the Government Work Plan reflects this. For this reason, the Committee is keen to see the development progress as quickly as possible.” 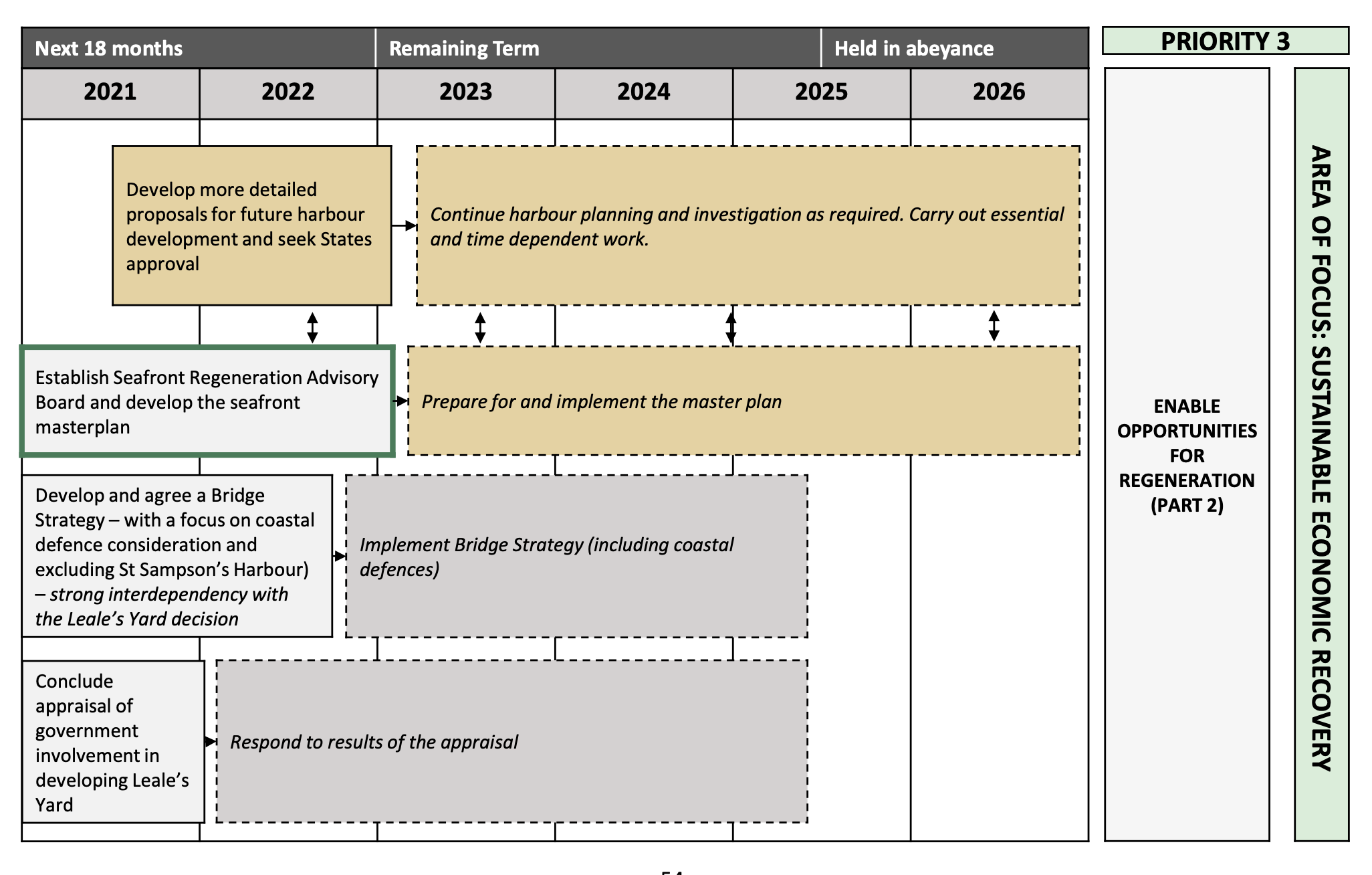 Pictured: The development has been included in the GWP’s list of priorities.

Despite its inclusion in the GWP, concerns have been raised among other members of the States’ Assembly about the delay in getting the development off the ground.

“I don’t understand it [the lack of progress on the project], but I regret it,” said Deputy Gavin St Pier.

“If we are serious about economic stimulus, revitalising the St Sampson’s/Bridge area, and tackling the housing shortage, this site is an obvious and easy one to get cracking with.”

Deputy John Dyke said Government should potentially look at purchasing the land if the Co-op does not progress its long-awaited proposals for the run-down area.

“We need to get Leale’s Yard going. Personally, if it doesn’t happen soon, we might have to do a States compulsory purchase. It’s just being sat on."

Pictured: “It won’t be the ‘answer’ [to the housing crisis] but it would help to be able to increase supply on that substantial site,” said Deputy St Pier.

Deputy Neil Inder is of the view that the Co-op should get on with the development as soon as possible.

“I hope the Co-op finds a solution to its long-term problem of not being able to develop its own land," he commented.

“It is true that it would certainly alleviate some of the housing issues we have at the moment and of course it would, with the right scheme, benefit the Bridge area immensely.

“The market appears reasonably ‘hot’ at the moment, and if the Co-op can’t get a deal together in this kind of market you have to wonder what they are continuing to do wrong?” 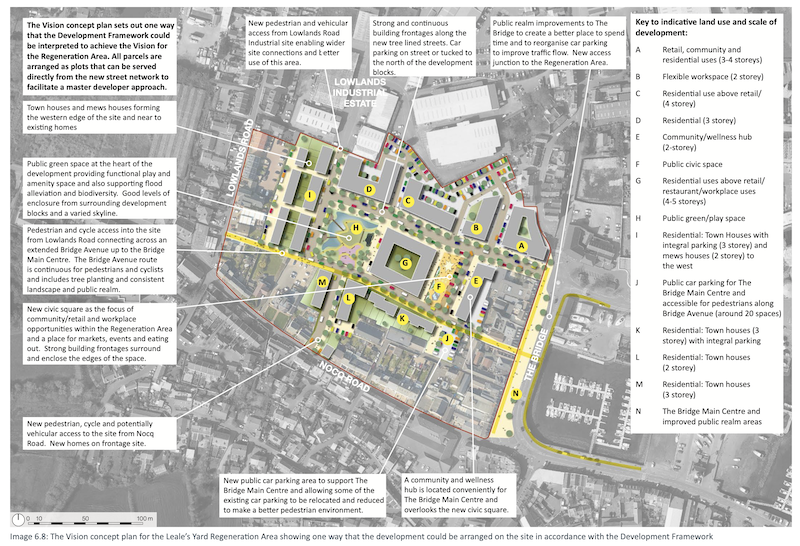 Pictured: The Co-Op intends to develop the Bridge into a more pedestrian friendly public centre.

“Given the fact that the States of Guernsey owns so much of its own land,” continued Deputy Inder, referring to the long derelict Castel Hospital, “I would take some convincing for government money to go directly to a private developer.”

He suggests the States of Guernsey would be better off developing its own land instead of assisting a private developer. It’s no secret that government finances are tight, but P&R does intend to help the development move forward, if not through any financial help.

“While the current financial circumstances mean no public funds are available for a grant from the States, the Committee is working with several parties outside of the States involved in the proposed development to see how it can move the project forward and remove any existing barriers,” concluded the committee.

It's understood that work is ongoing to get the development off the ground, however its unclear when any public statement about its progress is going to be published.

Despite this, it's sure to be discussed during the GWP debate this month, starting on 21 July.