A woman from the UK has failed in her attempt to take the island's Civil Contingencies Law to judicial review.

Louise Le Poidevin claimed there was not a sufficient emergency in the island to warrant use of the Law's emergency powers and that the Civil Contingencies Authority was using those powers improperly. The case followed Ms Le Poidevin being required to self-isolate when she arrived in the island to visit family in August.

The case for judicial review was heard by Lieutenant Bailiff Her Honour Hazel Eleanor Marshall QC. The Civil Contingencies Authority, which is the States' committee empowered by the Civil Contingencies (Bailiwick of Guernsey) Law, 2012, asked for Ms Le Poidevin's claim to be dismissed on multiple grounds.

Since March 2020, when it was prompted to act by the covid-19 pandemic, the Authority has been required to renew its emergency regulations on a monthly basis. These regulations have included various restrictions on travel into the island and substantial legal and financial penalties for failing to comply.

Lt-Bailiff Marshall heard how Ms Le Poidevin came to Guernsey on 29 August during the ninth iteration of the Authority's emergency regulations. 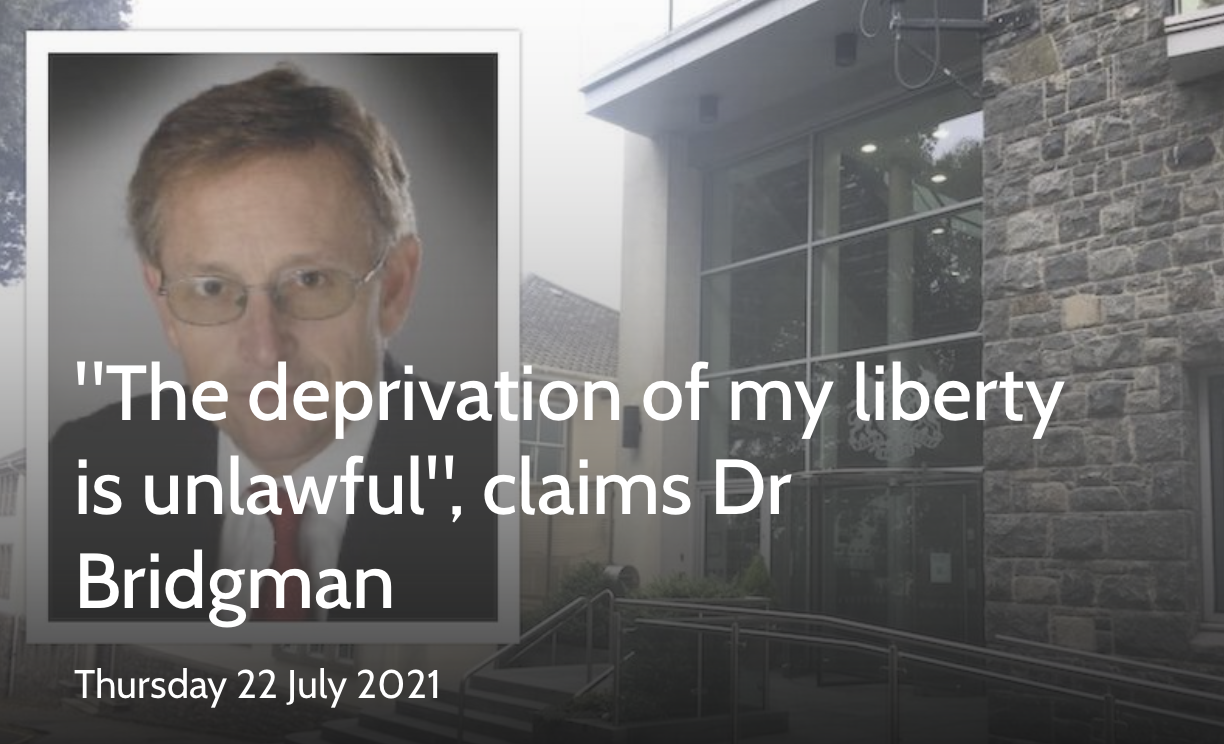 Pictured: This was the second time that the powers and actions of the Civil Contingencies Authority have been challenged in court. In July, Dr Stephen Bridgman, the States' Medical Officer of Health before Dr Nicola Brink, claimed 'deprivation of liberty' as a result of decisions of the Authority.

Ms Le Poidevin decided not to be vaccinated against covid-19 and also refused a test on arrival in the island. Under the regulations in place at the time, she was required to self-isolate for 21 days.

“She is not, she wished to emphasise, an 'anti- vaxxer'," said Lt-Bailiff Marshall. "But she does take the view that the anti-covid vaccinations are experimental and she does not wish to participate in what she sees as a global experiment in vaccination.

“She also, she made very clear, resents the form of coercion which, in her view, is what is being applied to people with regard to travel and movement restrictions dependent on their being vaccinated or not being vaccinated.”

When Ms Le Poidevin applied for judicial review of the Civil Contingencies Law, it was pointed out that her application would most likely be dismissed because the Law was enacted in 2012 as primary legislation.

This means it “lays down the possibility of emergency regulations being made and confers the power to do so on the Civil Contingencies Authority,” said Lt-Bailiff Marshall.

Lt-Bailiff Marshall gave the claimant a chance to explain the substance of her claim. During the hearing, she formed two grounds of challenge: no sufficient emergency and improper exercise of power.

Pictured: Concerns were raised at a recent meeting of the States about the ongoing use of sweeping powers through emergency regulations.

Ms Le Poidevin asserted that Guernsey had not experienced an emergency of a scale to justify the involvement of the Civil Contingencies Authority or its use of emergency regulations. In addition, she produced a bundle of documents to support her opposition to various aspects of the States' management of the pandemic, including alleged exaggerations about the number of deaths attributable to covid-19 and alleged flaws of PCR tests.

Lt-Bailiff Marshall said the claim that there was not a serious emergency was not a viable argument.

“This is because the point is that the power of the CCA to deal with an emergency and to make regulations rests also on the fact that there is, possibly, a potential emergency - in other words a situation where, if you do not make the regulations in question, a severe detriment to the health of islanders which then would be an emergency may well actually ensue," said Lt-Bailiff Marshall.

“I emphasise that the question is not even whether the Authority could reasonably have made a different decision, but whether the decision which it actually did make was one which it could reasonably have made at all, in all the circumstances and taking into account and balancing all the information which it reasonably had or should have had," said Lt-Bailiff Marshall. "In my judgment it would be an impossibly high hurdle to argue that it was not,” said Lt-Bailiff Marshall.

The claim was laid by Ms Le Poidevin in the first instance as a breach of the Human Rights (Bailiwick of Guernsey Law) 2020. She argued that quarantine is degrading. Lt-Bailiff Marshall disagreed.

“To suggest that a quarantine requirement, in appropriate circumstances, is either inhuman or degrading is absurd and is the kind of rhetoric which gets used when an argument is being advanced on an exaggerated or sensationalist basis," said Lt-Bailiff Marshall.

The application for judicial review failed and Lt-Bailiff Marshall refused permission for the claim to proceed.