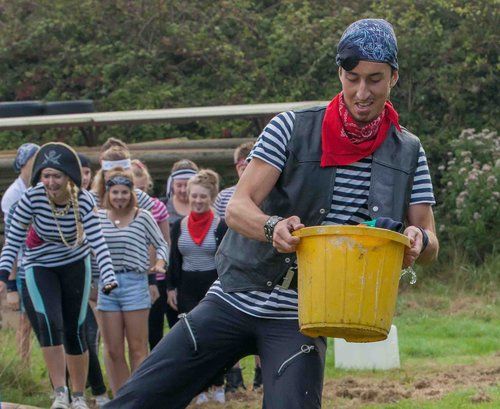 With the new term just starting, over 270 Sixth Form Centre students took part in the annual Team Building Day at Rue Maingy on Friday 5 September. Designed to break down barriers, create new friendships and get the students to work as teams, the day involved a variety of physical, mental and problem-solving tasks.

The team building day for new students joining the Sixth Form Centre, sponsored for the fifth year by RBC Wealth Management, is a great opportunity for the students to get to know each other in a relaxed and social environment.

Director of Sixth Form Studies, Kieran James said: ‘Every year, a large proportion of students join the Sixth Form Centre from the High Schools and the Colleges, so for a lot of them it is like the first day of a new school all over again. Within a matter of days they are into intense studying for their AS Levels or the International Baccalaureate Diploma, so any help we can give them to settle in quickly and happily is essential. RBC Wealth Management’s continued support allows us to offer this valuable team building opportunity and for this we are extremely grateful.’

A number of staff from RBC attended, including two who have first-hand experience of the day, having studied their A-Levels at the Sixth Form Centre. Andy Creber from RBC’s Guernsey Leadership Team, who also attended, said: ‘An event like this is an ideal way to facilitate the building of friendships, many of which will become lifelong. It is interesting to witness how the tutor groups work together, so that by the end of the day you would think they had known each other for a lot longer than six hours or so. Several of our staff studied at the Sixth Form Centre and have spoken fondly of the Team Building Day and so we are delighted to continue our support of this very worthwhile event.’