Prayer and praise at GROW 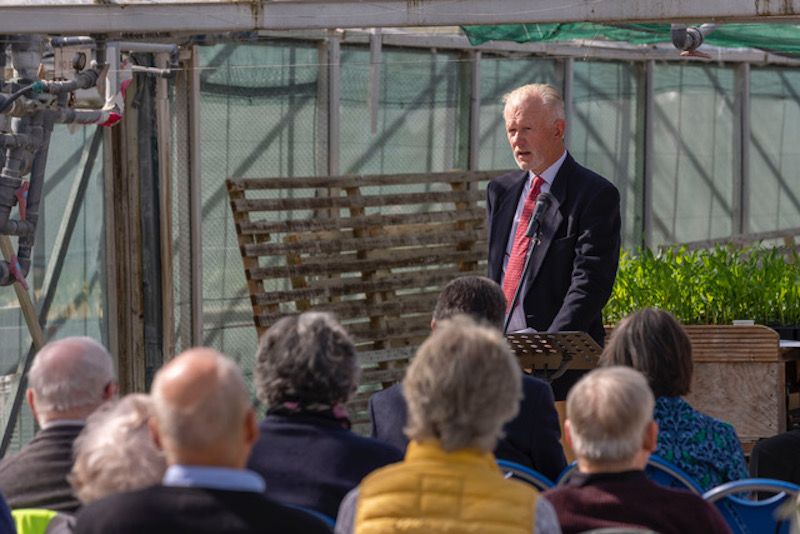 Prayer and praise at GROW

Congregations from island churches came together at GROW on Sunday for a service of prayer and praise as the charity looks to the future, when they will vacate their vinery site at Le Coutanchez in preparation for its redevelopment.

No 1 greenhouse played host to a congregation of over a hundred, transforming the house, packed with summer bedding and young vegetable plants for sale, into a place of worship.

The Salvation Army band accompanied the singing of hymns celebrating God’s bounty while reflections on GROW were given by Angus Bodman, a director of GROW Ltd and Sam Winterflood, a member of the crew who attends GROW throughout the week.  Both described how GROW provides structure and meaning to the lives of those who regularly work there.

Mr Bodman explained that GROW is a place where folk facing real challenges are offered the opportunity of a normal existence, one which most of us take for granted -  the joy of social interaction, the satisfaction of engagement in a rewarding task and the pleasures of passing the time of day in inconsequential chat with colleagues who understand. He said that otherwise, the crew might well spend much of their time isolated, staring at the TV,  or just the bedroom wall.

Mr Winterflood who first joined the crew at GROW 10 yers ago explained that making friends at GROW, and working hard together looking after plants for people to buy was important. to him.   Sam said that he has learned a lot of planting skills and enjoys getting out and helping in the community.

The Bailiff,  Mr Richard McMahon, who attended with Mrs McMahon read a lesson, with further readings by Pastor John Ogier of the Baptist Church and Neil Houston, Session Clerk at St Andrew’s in the Grange, Church of Scotland.

GROW was granted planning permission in December last year to redevelop the vinery site to create a modern facility.  This will provide training in horticulture, retail and hospitality to an increased number of attendees, equipping many of them with the skills to transfer into employment in the commercial sector.

A major fundraising campaign is underway to cover the cost of the £2.5 million rebuild. Anyone interested in helping to secure the future of GROW is invited to contact Marguerite Talmage, Director on 07911 719081 or Eddie Higgins, Manager on 721865 or email redevelopment@grow.gg.