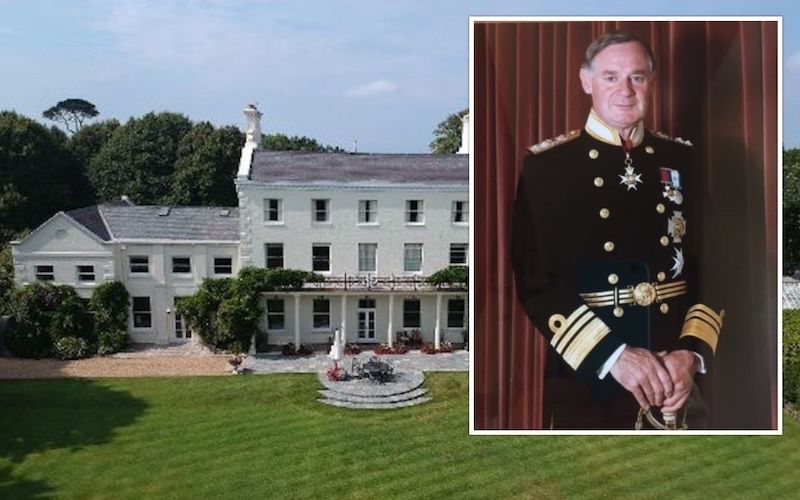 He passed away on Saturday morning, in his home town of Torpoint, where he had retired after leaving Guernsey in 2000.

He and his wife, Lady Diana Coward had been in Guernsey for six years, since 1994, having had his five year term of office extended to cover the millennium celebrations.

Prior to his term as Lieutenant Governor of Guernsey, Vice Admiral Sir John Coward had a distinguished career with the Royal Navy, which had included active service in the Falklands War and later as a training officer as Commandant of the Royal College of Defence Studies.

His death was announced in Guernsey by Government House - with the current Lieutenant Governor, Vice Admiral Sir Ian Corder paying tribute to his predecessor.

Very sad to learn of the death yesterday of Vice Admiral Sir John Coward KCB, DSO, Lt-Governor of #Guernsey 1994-2000. Many islanders have fond memories of Sir John and Lady Coward, who also refurbished Government House. Our thoughts and prayers are with Lady Coward and family. pic.twitter.com/yBR2nVT59M

The announcement said "many islanders have fond memories of Sir John and Lady Coward, who also refurbished Government House. Our thoughts and prayers are with Lady Coward and family."

Mother of the House, Deputy Mary Lowe is one of the few politicians still in the States of Guernsey who were in office during Sir John's term as Lieutenant Governor.

She led the tributes to him, revealing that they had stayed friends after he had left the island with their two families sharing holidays together.

My tribute sent to the media following the sad death of Sir John Coward the Bailiwick Lt Governor 1994-2000 who died yesterday pic.twitter.com/wmb32ByQbz

Deputy Lowe said Sir John was "extremely likeable, sociable, respected and popular" - adding that he was "very down to earth and enjoyed meeting and being in the community with the locals".

She recalled how Sir John and Lady Coward opened Government House up for a number of public events and supported many charities, before retiring to Torpoint where his love of sailing, cooking and playing the piano kept him busy.

Sir John is survived by his wife Lady Diana Coward, their sons Rupert and Sam, and their extended families.