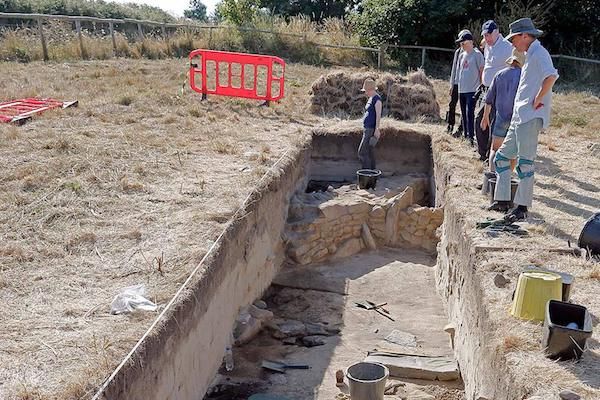 Archaeologists digging on the east coast of Alderney at the Nunnery have uncovered what they think may be one of the most significant Roman settlements in Britain.

In two weeks a team of volunteers and specialists working in a private field uncovered a building with a paved courtyard and segments of a network of thick stone walls, standing chest high in the 1.5-2m deep trenches.

The Nunnery is the best preserved Roman small fort in Britain, overlooking the natural harbour of Longis in Alderney and in sight of the French coast. Stretching across Longis Common is an amazing archaeological landscape including an extensive buried Roman settlement and its Iron Age antecedents.

The team, led by Guernsey Museums’ Head of Heritage Services, Dr Jason Monaghan, also uncovered evidence of the people that lived there, bones and seafood shells, cookware fragments, red Roman tiles, and fragments of fine, glossy Samian ware. One of the major finds was a coin dating back to the 2nd Century AD, which could indicate the period that the settlement was inhabited.

Experts believe the findings indicate the presence of a well established Roman site spanning an area of some 15,000 sq m.

Pictured below some of the finds from the dig. 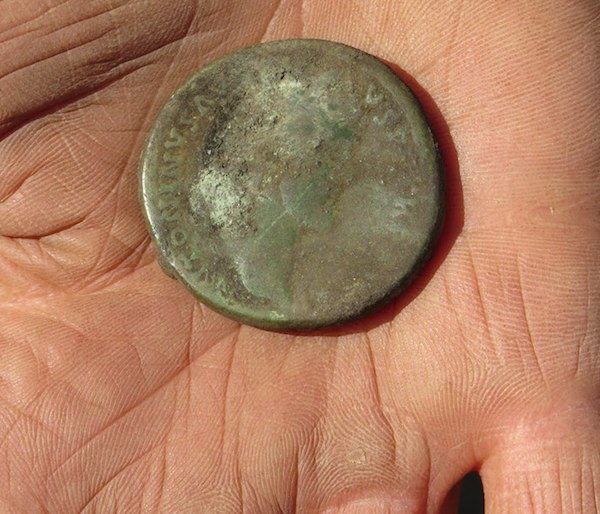 Pictured: Coin found dating back to the 2nd Century AD. 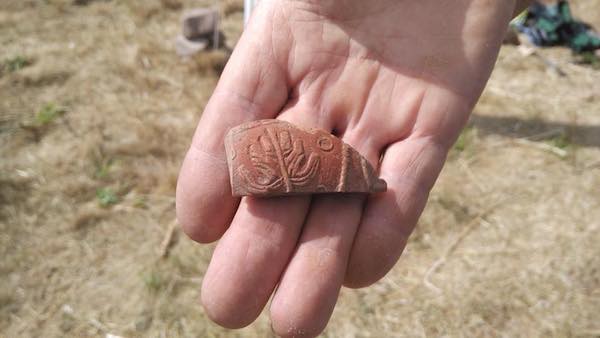 Pictured: A piece of Sarnian. 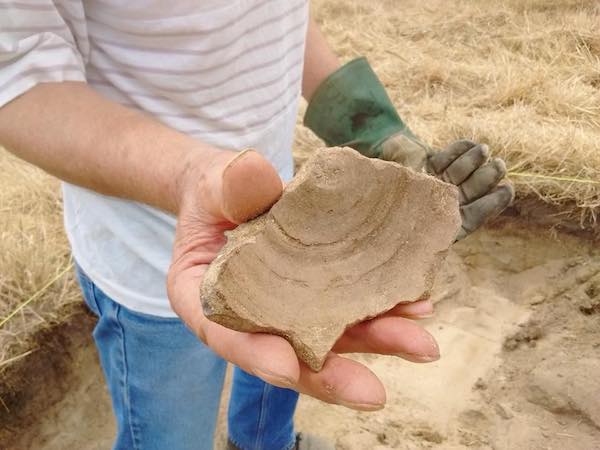 Dr Monaghan said: “Since Victorian times there had been reports of odd Roman finds out on Longis common, a coin here, a skull there, ‘huge walls’ in imprecise locations. Now we had proof that all these disparate finds were linked. Now we have a picture of an entire Roman settlement buried under the sand-dunes of Longis.”

The finds lie in the shadow of the Channel Islands’ only standing Roman fort, constructed in the 4th century AD, known as the Nunnery.

Excitingly for preservation purposes the settlement seems to have abandoned after Roman occupation and then was buried by huge volumes of sand blowing in from the beach. Not only is sand an excellent preservation medium, but it meant the remains were untouched by successive island developers.

Historians are theorising that the settlement could have started as a camp, becoming more permanent over the 200 or so years of existence, for traders and workers, and the wives and girlfriends of soldiers stationed at an early version of the fort. It could have been part of the military base itself.

Dr Monaghan said: "The most exciting thing about this excavation is that it confirms the spread of the Roman buildings in this area. There has been a lot of rumour over the years of something substantial at Longis but this confirms it. When we start linking it all up it’s clear we’ve got a village or earlier form of military establishment. It really is quite impressive. It’s certainly the largest archaeological site in the Channel Islands. It’s comparable to sites you see in York.”

Dr Phil de Jersey, States of Guernsey Archaeologist, was leading the dig in a trench were a wide section of courtyard was discovered, built on a solid foundation of stones. The work that went into it, he said, suggested the settlement was home to some relatively well off people.

Dr de Jersey said: “I think there may have been people living here of relatively high status to have some of the fine imported pottery that we’ve found. It isn’t just people living on the land. Perhaps there were people connected to the port if we assume that Longis was functioning as a port, middle class or upper middle class as well as the workers. Possibly somewhere under here the boss, the governor living in the highest status in a villa, with a mosaic, it’s all waiting here to be found.”

Visit Alderney tourism officer Anne-Isabelle Boulon said the wealth of Roman archaeology that was now surfacing, served to burnish Alderney’s reputation as the best place in the Channel Islands to discover history.

Ms Boulon said: “Alderney is already steeped in history from the Iron Age right up to the Second World War. Alderney’s Roman archaeology appears completely unique in the Channel Islands and has the potential to be very important for the island.”