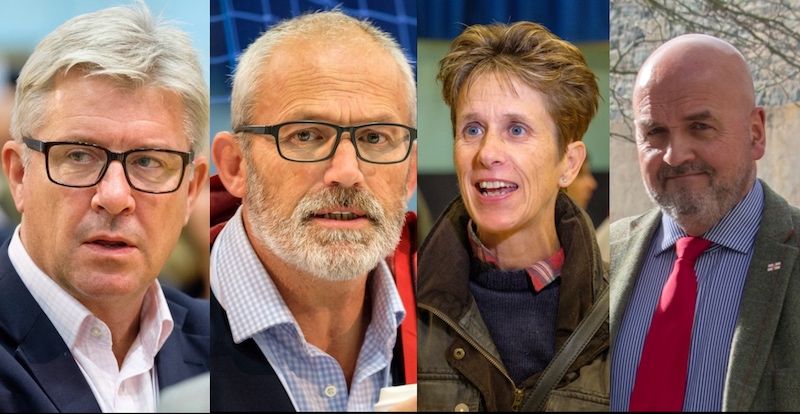 The former Health & Social Care President - who was also earmarked for P&R if Deputy Gavin St Pier secured the top job - took up Deputy Ferbrache's offer and achieved an almost unanimous election to the committee from her States colleagues.

"She was a truly able and excellent president of the Health Committee for the last four years," the new Policy & Resources President enthused.

"Her abilities: she is a chartered accountant, she had a distinguished record before she came into the States. It would be my intention to tell my colleagues, when we have our first full [P&R] meeting, that a person of her considerable ability should be the Deputy Chief Minister."

Deputies Jonathan Le Tocq, Mark Helyar and David Mahoney, all proposed by Deputy Ferbrache and seconded by Deputy Neil Inder, were elected to the P&R Committee with 30 votes, 32 votes, and 30 votes respectively.

The Presiding Officer announces that the following Members have been elected as Members of the Policy & Resources Committee:

Pictured: Deputies Marc Leadbeater and Sasha Kazantseva-Miller were absent from the vote.

Deputy Ferbrache said: "Deputy Le Tocq is a former Chief Minister, a former Home Minister, he has been External Affairs Minister for the last four or so years and it's a role he has discharged commendably in extremely difficult times.

"He is a person, again, of considerable ability, his reputation goes beyond this assembly today. He is a person of strong beliefs, as we know, and I am so pleased indeed that he has agreed to have his name put forward because I know that in an alternative situation he would have sought another office."

Deputy Ferbrache first met Deputy Helyar around 20 years ago and said he was struck by the young Sea Fisheries Officer's intelligence and talent. Since then, he has continued to cross paths with the first-time deputy, who has been working as a corporate lawyer.

Setting up the "very effective and successful" Guernsey Party within 10 weeks was no mean feat and while Mr Helyar is new to the States, Deputy Ferbrache said he had plenty of real-world experience.

I’ve developed cold/flu type symptoms together with an eye-infection. Have been to the Covid-GP clinic and waiting for clearance. This meant missing the States meeting today electing members of P&R.

Pictured: Deputy Kazantseva-Miller has explained why she could not attend the States meeting.

The same could be said of Deputy Mahoney: "He is the managing director of a trust company, he knows people and is very much part of a society."

"What I am trying to build is a team of talents, of different interests and different opinions. He would represent 'the independents'"