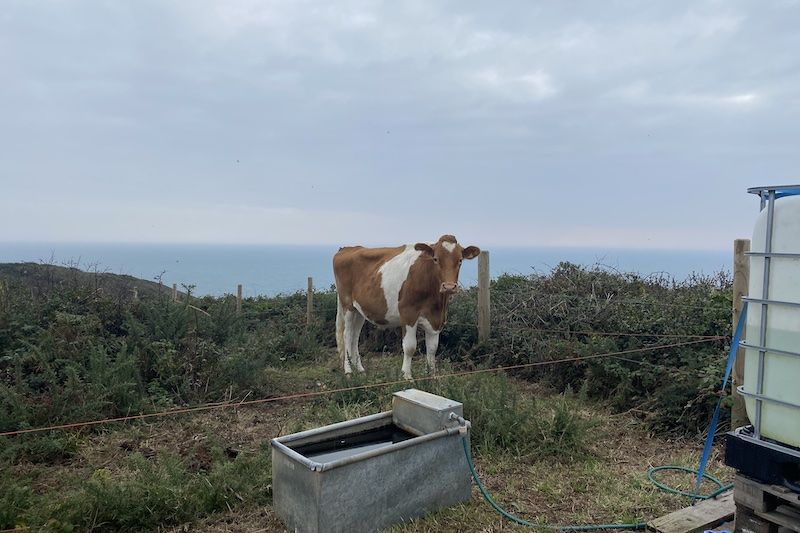 Express went to meet Conservation Herd Manager, Dave Bartram, at the Icart Headland to explore the many ways in which the herd is increasing Guernsey's biodiversity.

Conversations between La Societe Guernesiase and Biodiversity Officer, Julia Henney, resulted in the formation of the herd in 2014 to bring grazing back to the Bailiwick.

After some fundraising, two steers were purchased, Charles and David, named after the late President of La Societe, Charles David, who had played an influential role. Charles the steer has unfortunately passed away, however David remains one of the leaders of the herd, along with Brown Nose.

The herd was run originally by Ms Henney and, since July 2020, by Mr Bartram. It currently consists of eight steers, who graze and trample areas around the island in order to push back overgrowth and encourage new species to flourish.

The cattle used for grazing are dehorned and castrated a week after birth, making them steers as opposed to bulls.

The main purpose of the Conservation Herd is to increase the biodiversity of the island, and to encourage more species to settle in the areas.

Mr Bartram explained that the members of the herd are different ages and a variety of weights and therefore graze differently.

Cutting everything down with machinery not only costs money, but also cuts the growth all to the same height, whereas allowing the herd to graze and trample generates different heights, thus creating different habitats at different levels for different insects. 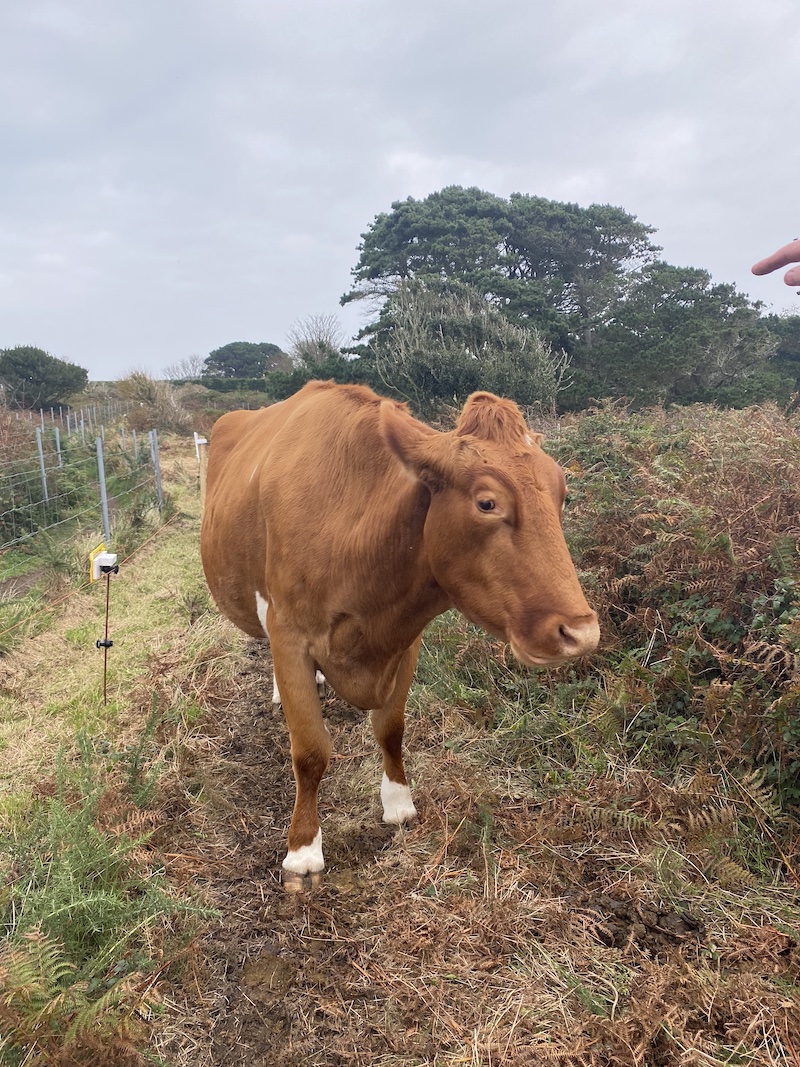 Pictured: Four of the eight cattle that constitute the Conservation Herd are currently grazing at Icart.

Allowing the overgrowth to remain prohibits new species of plants and wildflowers to grow, which also reduces the biodiversity of the area.

The quality of biodiversity in different areas is also monitored through quadrat surveys, conducted by volunteers of La Societe, some of whom are ecology graduates.

The results of yearly or bi-yearly surveys are monitored to track the increase in biodiversity of the area.

Why graze the Icart area after 100 years?

Icart Headland was not a designated environmental zone until recently. The plot of land that the airport runway was extended onto had been set aside for environment reasons, so the States of Guernsey issued a land-swap agreement.

It allowed Icart headland to be designated to biodiversity and environment instead.

Mr Bartram explained that the grazing schedule for the herd had already been arranged, so it took a few years to dedicate time for the herd to graze at Icart. 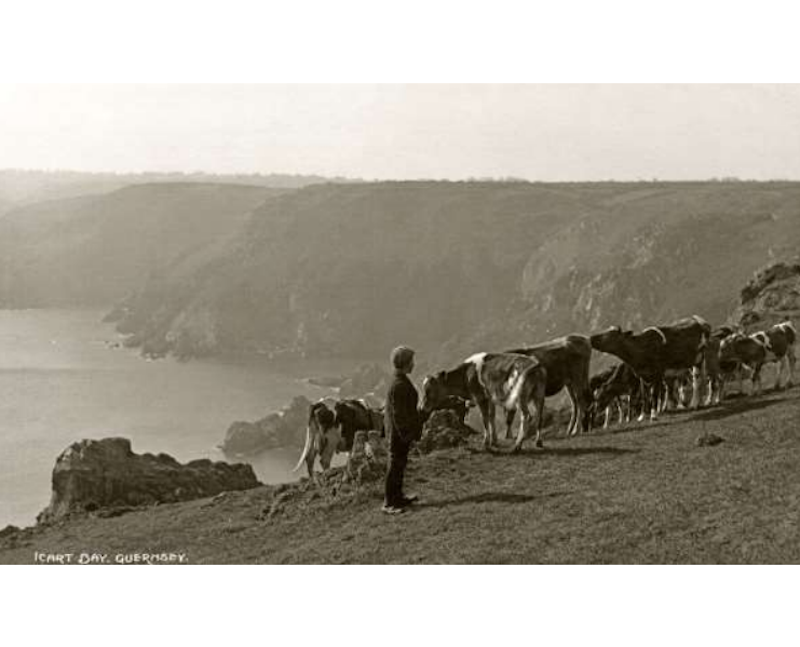 Pictured: Cows have not grazed at Icart in over a century.

He added that it takes a lot of alignment and planning to co-ordinate a new grazing area. Some of the trees bordering the grazing area needed to be felled before the herd arrived because they were dangerous.

Just four of the eight cattle are currently grazing at Icart, and the aim is for the herd to trample the entire overgrown area on the headland. While grazing is a priority at other overgrown sites, at Icart, Mr Bartram estimates the job is 80% trampling: “650 kilos under a hoof is easily going to trample bracken and bramble and knock it back.”

The herd have two weeks remaining at Icart before they are moved to their next location, however it is not expected for the whole area to be complete by then, and the herd will return in the new year and it could take a few years for the biodiversity to significantly increase.

Moving the herd around

The herd tends to rotate locations every four weeks or so. Grazing locations consist of private landowners, the National Trust, and the States of Guernsey.

He added that they have a field near Beaucette Marine where they stay for two months around November and December, before they are placed on L’Ancresse Common and the yearly cycle starts again.

“I work closely with Vale Common’s Council. They like the see the cattle there because the Common used to be grazed many years ago and people still have the right to graze.” 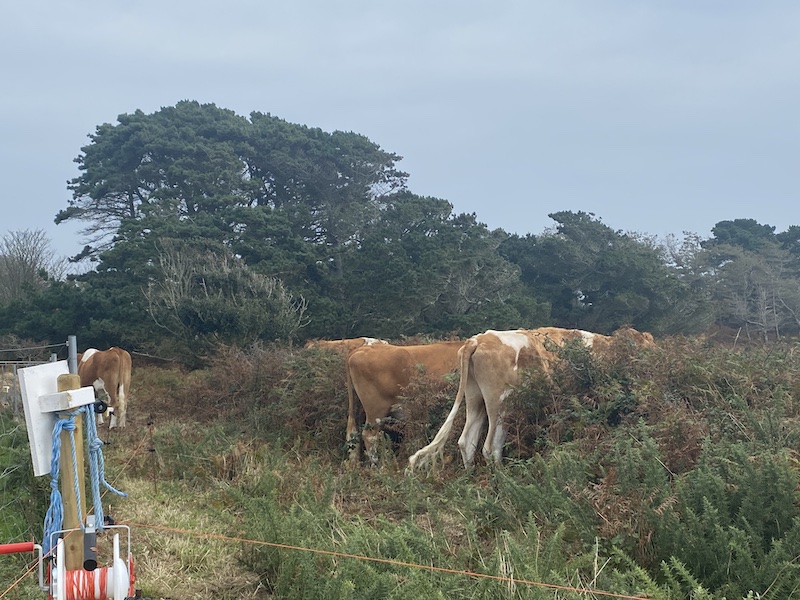 The herd will remain on the common for around three months at the beginning of 2022 but will be moved around different fenced-in areas, before they moved up the west coast to graze on a mixture of States-owned and private-owned land.

When moving the herd, the four younger cattle are moved first where they can be ‘boss of the field’ for a week or so before the older cattle join them.

Mr Bartram estimates there are 12 different grazing locations a year, however weather conditions can mean the herd are moved on early. For example, last October consisted of heavy rain, and the herd were in a low-lying field and so were moved on early.

On the other hand, if a location has no rain and lots of sun, the grass doesn’t grow and they could also get moved on early, therefore the rotations can be highly weather dependent.

The running of the herd

He said that Icart Headland was the hardest grazing location for the daily checks of the herd, due to their ability to disappear into the undergrowth.

The entire project is run by volunteers and sponsorship, and two cattle go to the abattoir each year in order to financially support the herd.

Of his own move out of finance and into farming, Mr Bartram concluded: “I will be doing this for the foreseeable future. I absolutely love it.”