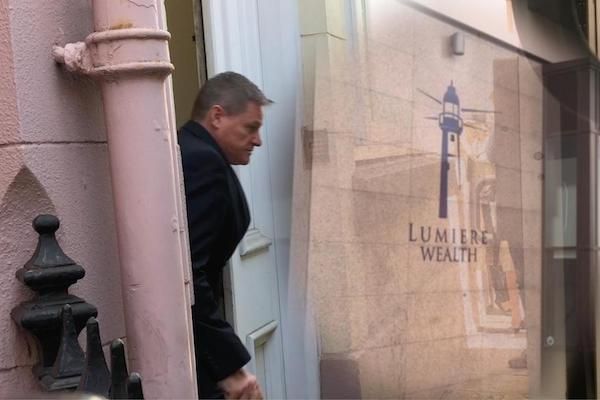 A former financier has been found guilty of misleading a group of elderly, vulnerable and financially inexperienced clients in order to obtain £2.7million of their money, which he then invested in a high-risk fund and lost.

Christopher Paul Byrne (50), the former CEO of Lumiere Wealth Limited, could now face prison in Jersey for the serious fraud which affected Guernsey residents too.

Before Mr Byrne is sentenced he will be remanded in custody.

Mr Byrne had denied all allegations that he had misled his clients in order to get them to invest in the Providence Fund, but this afternoon he was found guilty of 15 charges brought against him in Jersey following a trial which ended this week.

Video: Ex-financier Christopher Byrne has been found guilty after losing £2.7million of his clients' money in a fund which turned out to be fraudulent.

The Jersey Court found that Mr Byrne persuaded his clients into investing in Providence even if it wasn't suitable for them by concealing information as to the risks involved as well as his own vested interest in the fund.

Mr Byrne was represented by Defence Advocate Olaf Blakeley who made an application for bail until his client was sentenced, but the Royal Court Commissioner Sir John Saunders and Jurats Charles Blampied and Robert Christensen refused and ordered for Mr Byrne to be remanded in custody.

The verdict was delivered this afternoon to a courtroom packed with members of the public, including some of Mr Byrne's former clients who had given evidence during the trial.

The month-long trial involved evidence from the Jersey Financial Services Commission and his former clients, which included an elderly French couple, a pensioner and a retired teacher, and some Guernsey residents.

A spokesperson for the JFSC, Jersey's financial regulator, which conducted its own investigation, said that the body was "aware and has noted the verdict of the trial", but declined to comment on the conclusion.