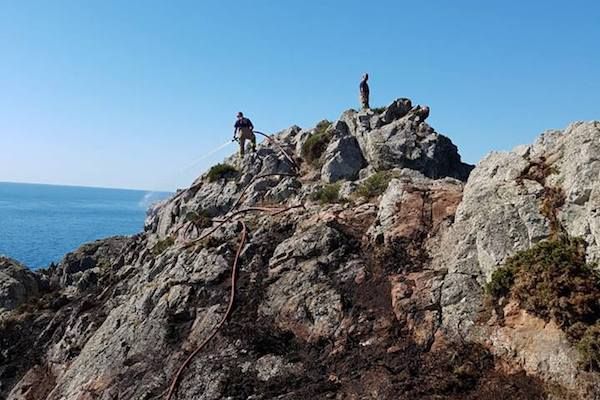 Guernsey's Fire and Rescue Service have been tested with a relatively small, smouldering fire which caught alight on the south coast cliffs with no way of accessing it using any of their vehicles.

The initial blaze near the Pea Stacks, at St Martin's Point, was spotted by a man on his boat on Wednesday morning.

He called 999 reporting flames and smoke, with the Fire and Rescue Service alerted at 08:32.

When the first crews arrived at the scene they found they had little access to the fire site, which was "well down on the cliff path, on the cliff edge."

Chief Fire Officer John Le Page said that meant they couldn't get any of the Fire and Rescue Service vehicles to the blaze and the firefighters had to walk along the path to assess the situation.

He said, "they emptied their napsacks on the flames - they're back packs they carry with a very limited water supply in, but it was enough to put out the flames and to dampen down the area a little bit. But it was clear that it wasn't out completely, but they had no way of getting more water supplies there at the time."

Chief Officer Le Page said the firefighters went back at lunchtime and again in the evening, putting down fresh water supplies from their napsacks each time.

The area was still smouldering this morning though, more than 24 hours after the initial call out, so the decision was made to run hoses down the cliff to give the flames "a proper drink."

Chief Officer Le Page said the fire wasn't a danger to anyone, or any property but they were wary it could flare up again so action needed to be taken.

"We rolled 23 lengths of hose down the cliff, from the nearest hydrant, and gave it a proper drink to really put it out.

"Even then the cliff undergrowth was still smouldering. The granite rock on the cliff face had got very hot and the peaty earth was hot and smouldering."

By lunchtime the fire was considered out as it was no longer smouldering.

The Fire and Rescue Service will continue carrying out regular checks on the site through tonight and tomorrow.

Chief Officer Le Page also said it's not clear what started the fire, although burn patterns consistent with a portable barbecue were found further up the cliff face. He said a coal could have rolled down the cliff, or the contents could have been pushed over the edge to dispose or them. Likewise he said, the fire site could have been smouldering for some days before flaring up meaning it was difficult to pinpoint when it started.

WATCH: Perfect storm for a wildfire in Alderney