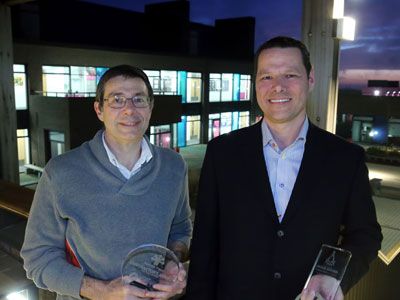 This year’s Guernsey Design Awards saw one local architectural project being presented with two of the coveted awards. The Prince of Wales Beer Garden was awarded The George Crossan Award for Small Projects and also won the People’s Choice Award. The architect for the project was Tyrrell Dowinton Associates and the contractor was Fusion Developments Limited.

Five awards were presented on the night, four of which were chosen by a panel of judges including representatives from The Guernsey Society of Architects, The Arts Commission and the building trade. The People’s Choice award was chosen by members of the public via an online vote.

Couin De Vacque, which replaced a dilapidated 1950’s villa, won the Residential new Build (over £250k) award. The architect for the project was Jamie Falla and the contractor was R G Falla Limited.

Mr Falla commented: “I’m delighted to have won this award. The site is adjacent to a National Trust field so it was essential that the build was highly sensitive to its natural surroundings, and the finished building has won plaudits from many of its initial critics.”

The Residential Renovation/Extension (over £250k) award went to La Vista, a refurbished 1960’s dwelling. Architects on the project, Doug Langlois and Brian Tyrrell from Tyrrell Dowinton Associates, were tasked with bringing the original building up to modern standards of comfort, design and efficiency. The contractor on the build was R G Falla Limited.

Mr Langlois said: “During the project we discovered that much of the timber structure needed replacing, but this also revealed hidden areas of original glazing which afforded us an opportunity to incorporate these into the design. This was a really interesting project as we had the opportunity to put the life back into an old house and convert it into a lovely modern family home.”

Building a brand new teaching environment for 660 students on a site where the existing school building remained in operation during construction proved to be a challenging but worthwhile project for David Gausden of Design Engine Architects and contractor R G Falla. The new Les Beaucamps High School won the Non-Residential (over £250k) award.

A courtyard arrangement was used to provide a safe inclusive environment, subliminal way-finding, better control of environments for management, teaching and well-being as well as natural light and natural ventilation. Special attention was also paid to the use of materials that could withstand a marine environment and blend in with the local surroundings.

Mr Gausden said: “We’re very honoured to accept this award. Les Beaucamps High School was a challenging project from concept to completion but the continued hard work and dedication of everyone involved meant the project was a great success.”

The Prince of Wales Beer Garden, which won both The George Crossan Award for Small Projects and the People’s Choice Award, was completed in just 12 weeks by architects Doug Langlois and Brian Tyrrell of Tyrrell Dowinton Associates and contractor Fusion Developments Limited.

The build had to incorporate a bar and seating, cellar, storage and toilets while still achieving a license for around 80 people. The solution was a compact design utilising every corner of the unusually shaped site.

Mr Tyrrell noted: “We had to take into consideration a number of factors on this build – the lack of space, the short construction period of 12 weeks and the need to respect its setting in a historical part of town. We’re thrilled to have won these awards, especially as the project was chosen by the public as their favourite.”

Eric Snell, guest speaker at the event, was impressed with the variety of design in the short-list.

“As an artist and designer, I really appreciate the positive impact of the Guernsey Design Awards locally and this year there was a great mix of projects.

“I’m a great supporter of such initiatives - initiatives to help raise the quality of design whilst also raising our understanding of how important good design is and how it effects everyday life,” said Mr Snell.

The Guernsey Design Awards were developed by the Environment Department and The Guernsey Society of Architects (GSA) with the support of RIBA and the awards have continued for 2014 with sponsorship from Norman Piette.