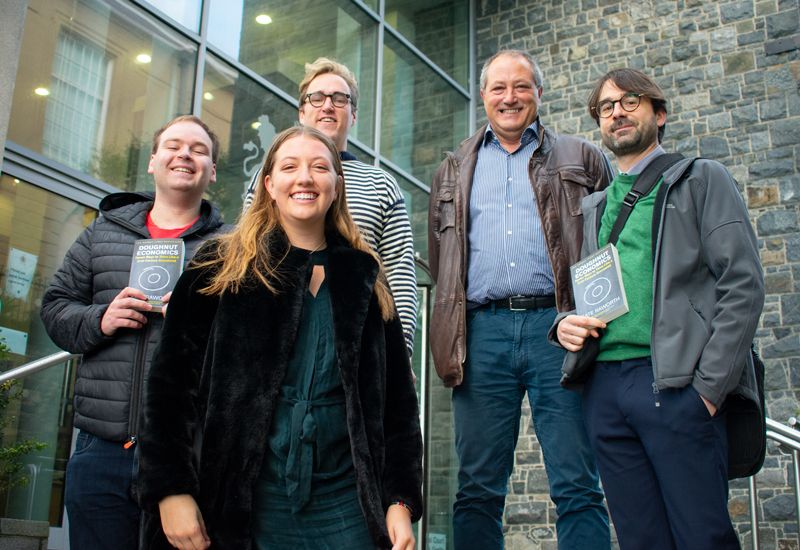 Business, governments and industries need to be held accountable for their role in the world's environmental and biodiversity crisis, writes Green Guerns. On Earth Day, the group is calling for "bold, creative and innovative solutions" that will benefit nature and ourselves.

"This Earth Day we want to encourage everyone to get out, to connect with and enjoy nature.

We need a renewed understanding of the importance of our ecosystem. Our world needs transformational change. We need to hold sectors, business, governments and industries accountable for their role in our environmental and biodiversity crisis. The global movement is calling for bold, creative and innovative solutions, requiring action at all levels - greenwashing, so easily disguised, is no longer an option.

Currently we and many other countries aim to reach 'Net Zero' by 2050, 30 years away. We thought it might be useful to explore some of the drastic changes we have seen over the last 30 years to illustrate really where another 30 years of inaction could leave us.

Since 1992 a tenth of the Earth’s wilderness has been lost; an area twice the size of Alaska has been depleted. World leading scientists say this loss is a tragedy, but also a threat to the survival of civilisation.

Pictured: Green Guerns describe themselves as "a collaboration of voices seeking immediate climate action", with the aim of creating a greener Guernsey for future generations.

The UK seagrass meadows have declined by 92%, almost half this loss has occurred in the last 30 years or so, not just hampering our ability to absorb carbon, but wrecking vital habitat.

These are two prime examples of quite simply devastating biodiversity loss. Furthermore, humanity has wiped out 60% of animal populations since 1970, wiping out whole ecosystems and creating planetary changes beyond our comprehension.

Biodiversity loss is directly linked to climate breakdown; whilst we have decimated whole ecosystems, we also hamper the earth’s ability to capture green carbon. Alarmingly, the Amazon Rainforest, ‘the lungs of the earth’, is now considered a Net Carbon Emitter. Put simply aggressive deforestation has resulted in the land mass emitting more CO2 than it absorbs.

This unending assault on nature and our relentless consumption of fossil fuels has us and our children heading for a catalogue of disasters worse than a pandemic.

Atmospheric carbon levels are rising year on year.  In 1998 Micheal Mann published a paper that sought to reconstruct past earth temperatures going back half a millennium. His findings illustrated the now infamous ‘hockey stick graph’ demonstrating sharp trends in global temperatures and atmospheric carbon linked to industrial growth. By 2001 the IPCC featured the graph in its third assessment report - there was little movement on its findings. Back then climate denialism was rife, with fossil fuel giants promoting a wash of fake news, commonly assisted by mainstream media.

What do we take from this all? Well in 1990 atmospheric CO2 concentration was 354 parts per million. Today, just 30 years later we've passed 420 ppm. To be clear the atmospheric levels of CO2 in 1990 were damaging enough, demonstrated through the litany of carbon reduction policies adopted over the past 30 years, most of which have had little impact on reducing emissions. The last time CO2 levels were this high, 3 million years ago, the average temperature was 2-3 degrees warmer than pre-industrial levels and the sea level was 15-25 meters higher. This is why when scientists say this is an emergency, they mean it.

The last 30 years doesn't paint the best picture, by in large demonstrating an inability by leaders to listen to science and take climate breakdown and biodiversity loss seriously. For many, the climate crisis isn’t future doom and gloom, it’s a here and now lived experience. But when we make positive changes, things can improve greatly for nature and us. Time for a bold step forward.

Pictured top: Some of the members of Green Guerns on steps of the Royal Court building last year, handing copies of 'Doughnut Economics' to the newly sworn-in States members.

"We've got plenty of land, we should be growing more locally"

"Business as normal is not sustainable"