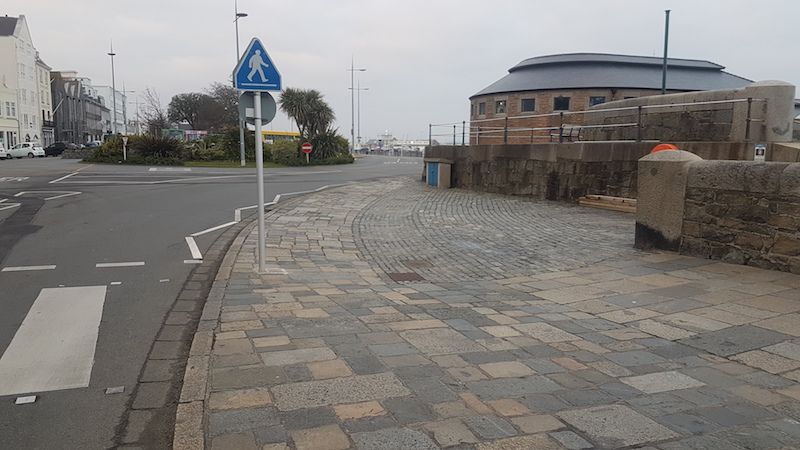 Physical barriers could be put up to stop people parking on the pavement at the Havelet slipway at South Esplanade with concerns over road safety if the issue isn't tackled.

A spokesman for Traffic and Highways Services says they've been asked to look into it and to monitor the perceived problem to see if something like railings could help ensure the safety of people using the zebra crossing.

The matter was first raised on social media, with the States body asking people if they could see the child waiting to cross the road, in a picture taken from the pavement near the popular ice cream van at Havelet.

While some people pointed out that the picture had been taken from the perspective of someone on the pavement, as opposed to a car driver who would be in the road, THS said the view point was the same and a child waiting to cross while a car is parked as pictured above, would be at risk.

Guernsey Police were the first to notice the problem of vehicles parking on the pavement at South Esplanade, and officers asked THS to look into it, to see what could be done to raise awareness to ensure drivers think about pedestrian safety as well as their own convenience.

Traffic Wardens regularly patrol the area, and when Police Officers are in the vicinity they are also able to put tickets on any vehicle parked illegally. However THS says there is often a problem with pavement parkers near the ice cream van throughout the day so it is hard to monitor effectively.

"Although Traffic Wardens and Police Officers will ticket and move vehicles on which are parked there (and other areas), when they encounter them, the problem at this location is often constant throughout the day. Drivers continue to park on the pavement, we are therefore being asked whether other measures can be taken to minimise the road safety risk," said a spokesperson for THS.

One idea to stop the problem happening is to put fixed railings up along South Esplanade to stop vehicles parking on the pavement, however THS hopes it won't come to that.

"At this stage we are working with Guernsey Police to monitor the area and are hopeful that the social media post and resulting discussion will raise awareness of the issue and deter motorists from parking on the pavement and causing the road safety issue at this location."

Hope the above makes sense, as you can appreciate, it’s one of a number of areas where problem parking occurs, but understandably our concerns our heightened in this location due to the ice-cream van and the likelihood of children being in the area, etc.