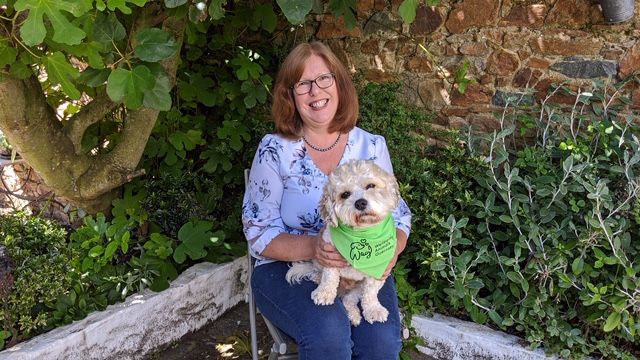 The current patron pooch of Wellbeing Animals Guernsey will be leaving the island next year – but not before passing over the mantle to another high-profile hound.

Milo, the stately hound who answers to His Excellency the Lieutenant-Governor, Sir Ian Corder, has been the WAG Patron Designate since 2018.

With Sir Ian's term of office ending next year, a new dog has agreed to follow in Milo’s paw-prints.

That dog is Harvey, the three-year-old Cavachon companion to Director of Public Health, Dr Nicola Brink. He will be introduced to WAG volunteers and their therapy dogs at the first of this year’s ‘Ten Walks, Ten Weeks, Ten Parishes’ series at the end of September.

Each Sunday, beginning 27 September, participants will take part in a dog walk around a different parish, finishing with St Peter Port on 29 November.

Dr Brink and Harvey have been invited to the final event at the grounds of the Government House, where Harvey will meet his predecessor, Milo.

“Harvey has a hard act to follow,” said Dr Brink. “Milo is a popular patron with WAG, but I’m sure Harvey will pick up a few tips from Milo when they get together.”

Pictured: Milo, current Patron Designate of WAG, will hand over his lead in November.

Dog owners are invited to take part in the Ten Walks series by purchasing a ‘passport’ that will be stamped at the conclusion of each walk. Anyone who has completed the nine subsequent walks will be invited to the final walk at Government House, to meet the two important pups and receive a certificate signed by Milo.

“We’re delighted to hear that Milo will be succeeded by such an eminent canine, and we’re all looking forward to meeting Harvey,” said the Lieutenant-Governor. “WAG therapy dogs provide so much joy to people in a variety of different situations. Milo has been pleased to do his bit to support them.”

Passports for the walks will cost £10, and are available from Venture Garage in St. Peters, Creature Comforts in the Bouet, or at the starting point for each walk. Anyone who would like to join in but can’t make a Sunday may complete the walk on a different day and present a selfie of themselves and their dog at the finish line to receive a stamp.

The first walk begins at St Saviour's Community Centre at 14:00 on 27 September.