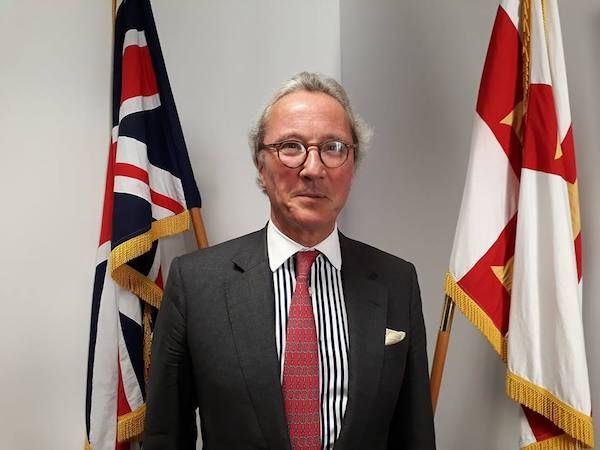 Lord Richard Sanderson Keen, the Minister with responsibility for Crown Dependencies arrived in the island yesterday making his first official visit to the Bailiwick, with Brexit high on the agenda.

He was appointed as Minister for the Crown Dependancies in September 2017 and this is not only his his first official visit, but also his first visit to the Channel Islands ever. He is spending time meeting local politicians and influencers in Guernsey, Alderney and Sark.

"With regard to Guernsey I am very impressed with the island I think it is a stunning location," he said. "I had the opportunity to have lunch overlooking the harbour and the castle. I am very impressed with the Government officials that I have met and with the Chief Minister and the Bailiff, all of whom have engaged very directly about the issues that affect Guernsey and indeed the Bailiwick as whole. It is interesting that in Guernsey there is an interest not just in Guernsey itself but in Alderney and Sark."

With one of the most pressing issues facing the UK at the moment being Brexit, Lord Keen is aware that decisions made in Westminster will affect the Bailiwick and has a good grasp on the unique issues that will impact on the island.

He said: "I think clearly they have a major interest in the matter of financial services and banking and how that may be affected by our exit from the EU and clearly we are taking into account the interests of Guernsey as we proceed with the Brexit negotiations and there has been regular and as I understand, very effective engagement between officials and the Government on Guernsey and in particular The Department for Exiting the European Union in Whitehall and these will continue and indeed it is anticipated that there will be a meeting with Minister Walker on 10 October for further discussions on the issue of Brexit."

He further iterated his understanding of the impact felt on island when decisions are made in the UK: "It can be felt of course it can be and we have to ensure that where we are taking steps such as Brexit that we take the Crown Dependancies with us and that we ensure that they are properly informed as to where we are going and why we are going there and what the consequences will be for them as well as the UK as a whole", he said.

Pictured: Brexit is high on the agenda everywhere at the moment, including the Bailiwick of Guernsey.

The previous UK Minister with responsibility for the Channel Islands, Lord McNally, used his position to intervene in the Barclay brothers feud over Sark. In an unprecedented government move back in 2012, he told the Barclay brothers that the UK would not allow them to turn Sark into a 'company town.' Lord Keen said that he was not planning on meddling with local politics, but was hoping to assist and advocate the Bailiwick of Guernsey.

"I don't think we should immediately commit ourselves to stepping in, I think what we need to do is engage and understand what the issues really are, very often in a small island with a small population, issues become magnified and I think you have to make allowance for that. So what might appear within the island to be a major constitutional issue can when you stand back and examine it be a matter that is relatively easily resolved. But I appreciate that there are challenges faced by for example Sark, that are quite unique for an island and a population of that size and I think we just have to accommodate that. We are there in order to assist and promote the interests of the Bailiwick as a whole and we will lend assistance where we can, but that is short of stepping in. These islands are unique in the sense that they are responsible for their own domestic legislation and while we have the right to interfere in domestic matters we would never seek to do so without the consent of the relevant government authorities in the island."

Lord Keen has been outspoken in the House of Lords on Brexit and has strong beliefs with his legal background that the UK should not have to comply with EU law after it leaves, stating in the House that: “When we leave the union, union law will be foreign law.” He is keen to highlight that many issues are still up in the air with regard to Brexit, and it is not just about trade, as a Conservative party politician he is still hopeful that a deal will eventually be made with the EU.

Lord Keen, said: "We remain committed to securing an agreement with the EU 27 and that is what I believe we will achieve, its never going to be simple and straightforward because quite understandably the EU Commission will represent the interests of the EU 27 and we must represent the interests of the UK as a whole including the Crown Dependancies, but I think sometimes people adopt a stance that is seen as perhaps dogmatic or perhaps aggressive and I think really we have to see beyond that and understand the common interests and there is a common interest for the UK and the Crown Dependancies and the EU 27 in securing a sensible agreements on a whole raft of issues quite apart from trade."