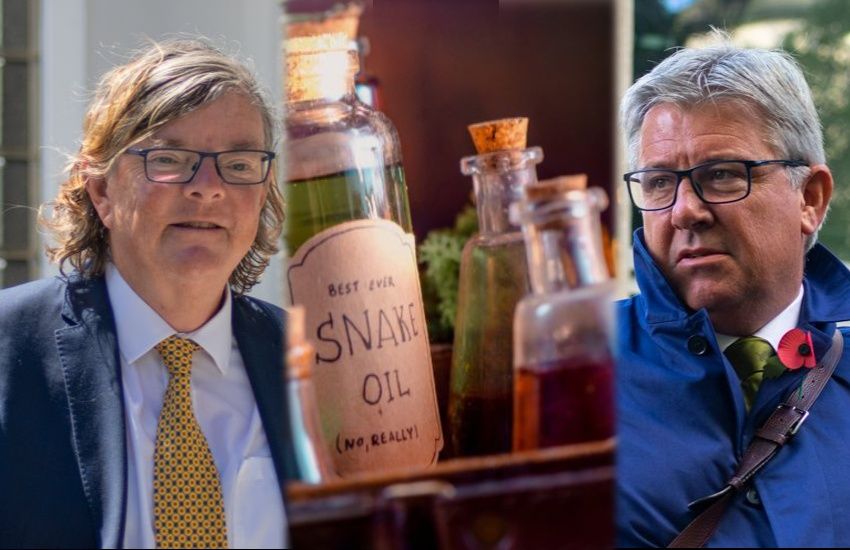 Treasury lead Deputy Mark Helyar has accused one of his predecessors, Deputy Charles Parkinson, of promoting "snake oil" by proposing company tax reform as a potential solution to a projected deficit in States' finances.

Deputy Helyar is leading the latest tax proposals from the Policy & Resources Committee, which include the introduction of GST, probably at 5% or 8%, and a raft of reforms to social security contributions to offset the effects of GST on the poorest households.

The Committee's proposals face widespread opposition from other deputies. Express has canvassed the views of almost all deputies except those putting forward the latest proposals. Most deputies replied and only two indicated that they were giving serious consideration to supporting GST.

In a recent interview for an Express podcast - available HERE - Deputy Parkinson criticised Deputy Helyar and his colleagues on the Committee for not putting more effort into reforming the company tax regime as a priority ahead of proposing increases in personal taxes. Deputy Parkinson also said the Committee should resign if it failed to get GST through the States.

"Snake oil - my preferred definition is talk that is intended to impress others but is insincere or deceiving. Deputy Parkinson's territorial tax regime is just such a thing," said Deputy Helyar.

Pictured: The Policy & Resources Committee says it is currently in listening mode engaging with the public about the future of tax policy.

On Facebook, Deputy Helyar wrote: "We need co-operative government to solve our funding problems. If Deputy Parkinson has the skills he professes to have, why not use them for the public good, as he is paid for, instead of playing dog whistle political games on Twitter?

"Deputy Parkinson has very high regard for his professional expertise. Those who are gullible enough to think his ideas are an open attempt to try and find a solution for the Bailiwick rather than just political games being played at your expense should bear in mind that he has attended almost none of the briefings intended to garner feedback from deputies and has not sought to have his ideas tested by the treasury team."

Deputy Parkinson defended his suggestions on company tax reform and the approach he is taking to the ongoing debate about the future of the island's tax system.

"Snake Oil salesman? At least I have been consistent with my manifesto promises," said Deputy Parkinson.

"And as for why I have not tried to contribute to the Policy & Resources Committee's process, Deputy Helyar’s post perfectly illustrates the reasons: a) his comment on Hong Kong tax shows he knows very little about international tax and b) he is unwilling to learn. He has himself attended very few briefings for States' members this term."

Pictured: The States are lining up for another debate about tax policy this summer. The Policy & Resources Committee is projecting an annual shortfall in States' finances of £85million a year.

Deputy Helyar has suggested that a territorial tax regime would not be viable for Guernsey.

He said it would be "potentially internationally unacceptable as with Hong Kong, taking us out of a level competitive field of tax with our competition in the Crown Dependencies and at the same time driving a bus load of Guernsey financial services business which pays tax and employs islanders straight off a cliff."

Opposition across the States to P&R's latest GST plan