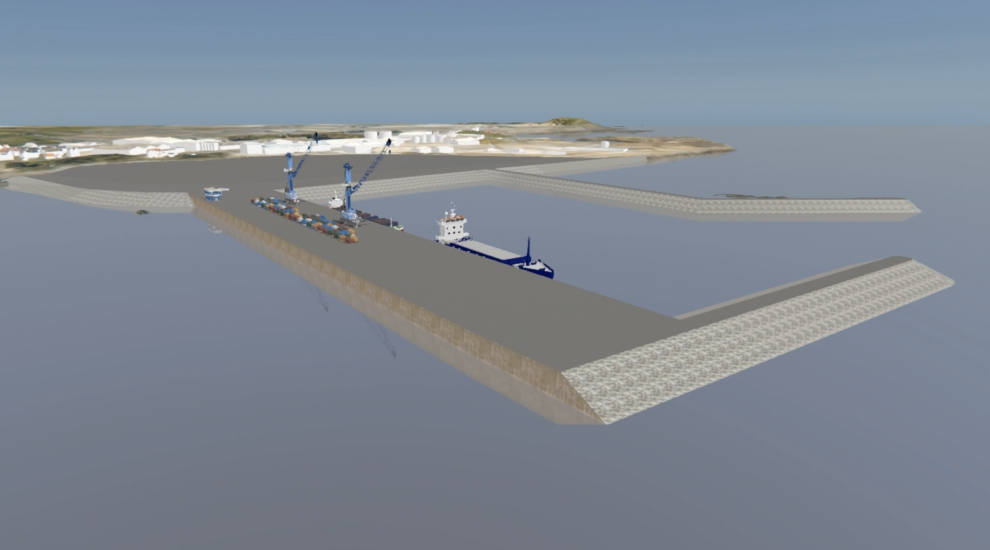 Ambitious £360m plans to create a third harbour at Longue Hougue South, build a new passenger terminal on North Beach and create multi-level underground parking in Town have been rejected by the States after a bad-tempered debate.

A two-year review of the current harbour facilities, future demand and potential economic opportunities or freeing up space at both St Peter Port and St Sampson's Harbours - by creating a third port for fuel and freight - ultimately came to nothing.

Deputy Neil Inder was one of numerous deputies to express serious concerns about the simulations for Longue Hougue South, following an excoriating letter from former deputy and harbour pilot Barry Paint.

He argued that it would be "suicidal" to build a port there because of the tidal conditions and "dangerous reef", concluding that the proposals needed to be "properly scrutinised by the very people who will have to carry out the safe navigation of vessels".

Meanwhile, Deputy Andrew Taylor questioned what exactly would be achieved by the proposals, given the massive price tag attached. "Most of the work that needs to be done in our harbour is maintenance, which is a mandated responsibility of the STSB," he said. 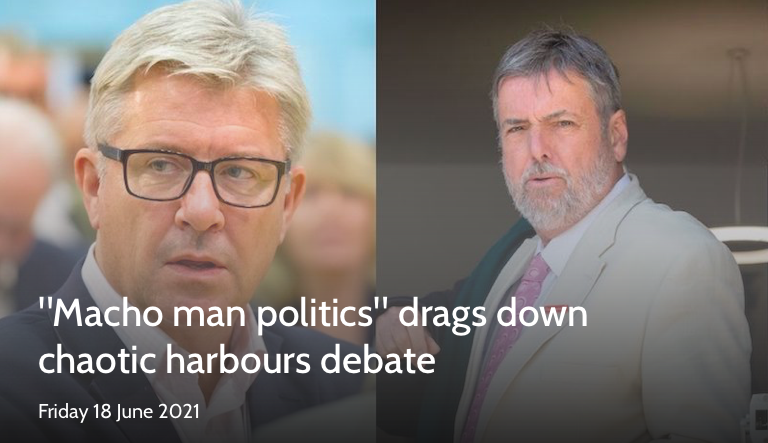 Pictured: Deputy Roffey described P&R's efforts to delete all of the STSB's proposals as "control-freakery" and further signs of a move towards centralisation and cabinet government by the backdoor.

STSB President Peter Roffey responded to debate on the final proposals - which were subject to nine amendments - despairing that the economic opportunities and commercial necessity he envisioned from the project would become just another report left to gather dust.

"The reason there have been many reports about this over the last 40 years is that consecutive assemblies have realised that there is a case and a need to do this," he said of revolutionising St Peter Port Harbour, which is in an ever-deteriorating condition.

"However, none of them have had the strength of mind to see this through." The outcome he sounded resigned to in his closing speech soon became a reality, as the States decided against adopting his board's proposals by 21 votes to 13, with six absentees.

Eyebrows were then raised following the States' u-turn on one of the amendments laid by Deputies Sasha Kazantseva-Miller and Sam Haskins.

The amendment requested a detailed review of the economic opportunities that could be provided by developing Guernsey's blue economy, through such ideas as leisure marinas, increased provision for super yachts and marine tourism.

Having originally been supported by 25 votes to 11, a crucial swathe of that support fell away when it came to the vote on the final package of proposals. It was tied 17-17, failing to secure a majority of those participating in the vote and therefore losing.

Amendment unnecessary, well as long as GWP supported anyway, as Blue Economy a priority in it and will be part of TOR of Regeneration Board.

Pictured: Deputy Sasha Kazantseva-Miller was left shocked and frustrated after what she called an "unbelievable flip-flop in voting" saw her amendment approved in principle before failing when the final proposals were voted on. P&R Vice-President Heidi Soulsby responded, saying the blue economy is already a priority in the Government Work Plan.

Policy & Resources Vice-President Heidi Soulsby countered her colleague's frustrations by saying Deputy Kazantseva-Miller will have the opportunity to support the blue economy at the Government Work Plan debate starting on 21 July.

"It was irrelevant. All of it," she tweeted of the result of Deputy Kazantseva-Miller's amendment. "That will all be considered by regeneration board. It’s in the GWP [Government Work Plan]."

The creation of an arm's length board looking at the entire seafront regeneration area was one of the amendments to succeed. It came about following an eleventh hour intervention by Policy & Resources, bidding to replace all of the STSB's recommendations with their own.

Despite saying on Wednesday that the committee wanted a more "collegiate" approach to politics geared around "working together" at a media briefing about the GWP, the committee published its own suggestions for harbour development that very same day.

Deputy Mark Helyar from P&R questioned the "scattergun" approach to harbour development to date and said a specialist group was needed - at arm's length from government - to unite proposals for harbours and the rest of the eastern seaboard.

"This is too big an opportunity to scupper," he said. "The most sensible path is to delegate the ability to deliver a wider, coherent and cogent programme of redevelopment and regeneration to a group tasked with only that responsibility." 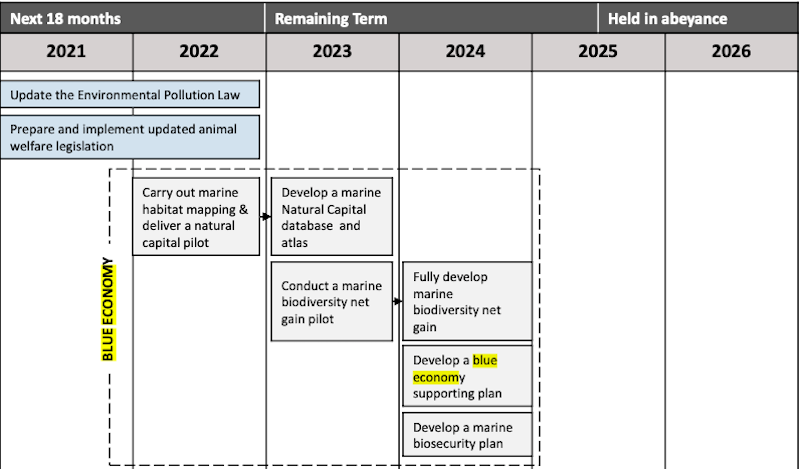 Pictured: The Government Work Plan - led by P&R - identifies Guernsey's blue economy as an area that should be developed this political term.

In a debate that descended into "macho man politics", primarily between P&R and the STSB, much was made of a supposed "compromise" between the two committees during a hastily-arranged meeting during Thursday's lunch recess.

However, P&R members appeared to turn their back on that agreement when it came to the final vote in a turbulent and often difficult-to-follow debate.

P&R did overwhelmingly support Deputy Neil Inder and Deputy Simon Vermeulen's call for the States to come up with proposals for a marina in the Pool of St Peter Port Harbour.

This was approved, with an incensed Deputy Roffey accusing the Chief Minister Peter Ferbrache of only supporting that amendment to keep the Economic Development President on side. 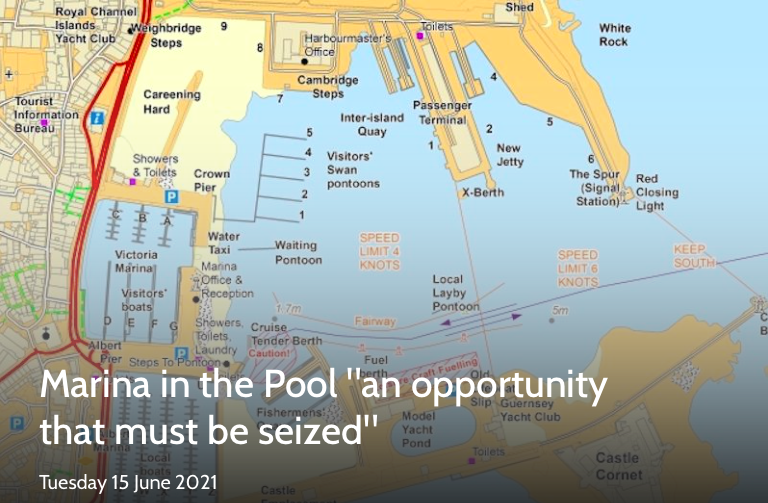 Pictured: Deputy Inder said the point of the amendment was to set in stone an idea that had been referenced by the STSB without any firm commitment.

Deputy Roffey alleged that the States of Guernsey is now being run by an informal coalition between the Guernsey Party and the so-called 'Van Party', whose members' manifesto images appeared on a van together in the lead-up to the 2020 Election.

Deputy Inder, for good measure, said that Deputy Roffey always reverts to personality politics and derided his proposals for a new harbour at Longue Hougue South, branding them "a complete lash-up".

Pictured top: A simulation of the failed proposal for a new port at Longue Hougue South for freight and fuel imports.