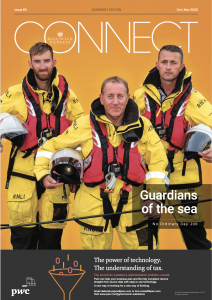 ‘At the time of writing’ is a phrase I have become all too accustomed to using in recent months. It’s a necessary proviso when the global corona virus situation continues to spike and spiral into new waves, even though Guernsey appears to be at a standstill; safe, but also stuck in a waiting room for the chance to see the world again.

In broad terms, public opinion can be split quite markedly into two points of views. The first is the view that Guernsey should not open up to tourism and less restrictive testing until it is perfectly safe to do so. In fact, I have heard from people who would, and I quote, “be happy if Guernsey never re- opened its borders.”

For those who have family in the UK, and those who rely on easy passage to the island for business reasons, the idea of that becoming reality is a matter of deep worry and fear. Those, it appears, are the common threads; worry and fear of what will happen if our border restrictions are eased too much or not enough.

It is worth looking at a recent business survey, in which the majority stated that travel before the end of the year is “critical.”

It found that more than 75% of respondents want the island to move swiftly to repeat testing - and many feel that visitors having to wear masks or socially distance would be better than the current travel restrictions.

Like all difficult decisions, what the Civil Contingencies Authority decides will not go down well with everyone. What is important is that everyone is listened to, all concerns and needs are factored in, and that our authorities don’t simply choose the path of least resistance.

So far, all the leadership has been evidence-based and pragmatic, with a ‘safety-first’ approach underpinning the decisions.

One of the benefits of that is the ability for people locally to meet in large groups, which we cannot take for granted. After all, we don’t have to look very far to see the prohibitions that the UK have had to enforce.

That freedom to continue with ‘day-to-day’ life has meant that forward-thinking plans for the Guernsey Institute have continued to progress.

The Guernsey Institute is the one part of Education’s transformation plans that have coasted through the States with the full backing of the profession. We spoke to the people heading up the plans to find out why.

Looking further afield, CONNECT delved into the newly-formed sports nutrition, protein and vitamin partnership between Healthspan Elite and the legendary All Blacks.

We spoke to Healthspan’s Sales Director about the global partnership, how it fits into the Guernsey- founded company’s expansion plans and what it was like brokering the deal against the backdrop of the corona virus pandemic.

And if you’ve ever wanted to find out more about the everyday heroes who volunteer for the RNLI, then our feature with crew members past and present will provide you with a revealing glimpse into how they juggle their potentially life-saving responsibilities and out-of-hours callouts with their day jobs.