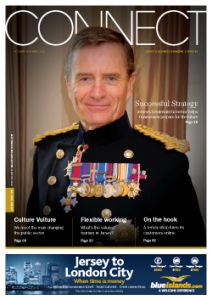 For the first time in nearly a generation, St. Helier sits on the cusp of an opportunity that could truly transform the lives of those who live and work there. It needs strong leadership, a coherent vision and a determination to get things done in a defined timescale.  The challenging economic conditions have, I believe, brought a new focus on the need to deliver jobs.

So why the new found optimism? Well it’s part personal, and part due to my position at the Chamber of Commerce. On a personal note I’ve been virtually living at the Waterfront for the past six weeks, as my business opened the first retail unit there in nearly five years. Like many,
I had seen the Waterfront as a concrete desert, separated from
St. Helier by six lanes of traffic.
What I’ve discovered is a vibrant residential area that is desperately waiting for new businesses to deliver the services that are required for modern-day living.

In the past the Waterfront development was seen as a threat to ‘old’ St. Helier, and clearly areas such as Colomberie, and the northern part of Bath Street, suffered as a result of this southerly movement - much to the resentment of the local residents.

I was recently given a history lesson by Pierre Horsfall, ex-chairman of what was once called the Waterfront Enterprise Board. He reminded me of previous interest in the area, such as in late 2005 when Centre Parcs was on the verge of investing £55 million in a venture. In addition, a number of our largest financial institutions were also showing serious interest in the investment potential of the Waterfront, and as far back as 2002 a design competition was held for a new footbridge to link the old town with its latest extension. Everything ground to a halt with a change in Planning Minister, and the collapse of confidence in Finance in 2008.

Due to the wide membership of Chamber, our views on various development schemes are eagerly sought. We were very supportive of the £150 million J1 scheme in Broad Street which although given planning permission still awaits pre-lets before the development goes ahead. Just recently we were shown a scheme for a residential development in the north of
St. Helier which would transform
this part of town. In the Colomberie area we could see a new police station adjacent to Green Street car park and a new multi-storey car park at Snow Hill. The final piece of the jigsaw then has to be the connectivity of Fort Regent to town. A re-introduction of the cable-car link sounds exciting, and government investment in sporting facilities at the Fort could be a great Olympic legacy.

The potential for a re-invigorated St. Helier is massive. The lesson we should learn from the Waterfront is that opportunities like these only come round once in a generation. If ever the time were right for action, it’s now.