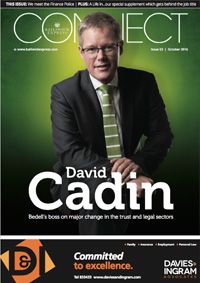 Speak to ten bosses, and I bet that 9 of them will tell you that managing people is the hardest part of their job (the other one probably didn’t understand the question). And so that’s the thread which runs through this issue of Connect: from our cover story on Bedell Cristin, which recently announced a new brand, a new leader and a major change in their operating model with the split away of their affiliated trust company; all the way through to our special supplement which you’ll find towards the back of this edition, looking at the actual job behind the title, and profiling the people who make each role a success. Leadership is a skill which few have naturally, and yet it is a requirement of everyone in a management role.

That means we have a major skills gap, something which the business community in Jersey has realised and is beginning to address. To help with that process, we’ve been running a series looking at what it takes to be a good leader (this month’s article is on page 41), all in the build-up to a major leadership conference on the 20th October (you can get tickets from 365tickets.je). Given that every business stands or falls on the quality of its people, can there be more a important skill than being able to lead them effectively?

But what happens when the strain of herding cats/pushing an octopus into a bucket (delete as appropriate) just becomes too much? Well, rather
than heading for the drinks cabinet, a solution which is certainly kinder on your liver, and more stimulating for your brain, is to seek solace in one of our regular features. So for a little ‘brain balm’ this month, I would point you in the direction of Who’s The Fool? (p26), Take 5 (p10), Deadly Diary (p12) or You are what you read (p44). You might not agree with what they say, you might want to scream at the injustice of their judgements or you might be upset at the sacred cows which lie slaughtered by the side of the road - but at least you won’t be thinking about staff problems.