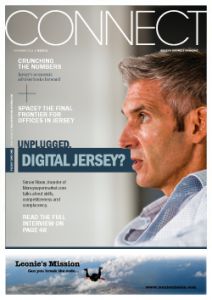 This is our 21st birthday edition of Connect. Before you look dubiously at your mug of tea, and wonder if, on reflection, it actually contained something a little more potent, what I mean is it’s our 21st edition. OK, it’s a closer milestone, but still significant, as it marks the completion of the foundation-building stage of the business, and the beginning of stage two – you can read more about our plans for next year on page 66; we are very much looking at the local economic climate as a ‘glass half full’. After all, that’s still more than enough to drink a birthday toast.

When we launched Connect in April 2011, we set out to tell the stories which really mattered to local businesses; we think that’s important as there is a tendency in Jersey to portray ‘business’ as akin to a rapacious child, who has the capacity to generate great wealth, but who lacks a clear moral compass. And so without the tightest of regulation and guidance from a wise and benevolent state, customers, employees or the environment (delete as appropriate) would be left abused and exploited.

Well, no, actually. At Connect we see business as the solution rather than the problem, as a creator of prosperity, and as a tutor of the need to work hard to look after your family, and your community. That launching, or growing, a business is about taking responsibility, providing jobs, and so weaving another strand in the Island’s social and economic wellbeing – which at their root, are exactly the same thing.

We try and tell those stories in engaging ways, from interviews, to articles, to our expanding family of Connect columnists, foremost among them being The Fool. On page 60 of this edition he takes a walk through the 2014 Budget, and what he finds on the way prompts him to redress the surprising lack of comment on proposals for the Island to borrow many millions, as well as funding a new hospital from hoped-for returns on our reserves.

We also believe in letting the characters in our stories speak for themselves, without intermediation – that’s the principle behind our ‘Unplugged’ feature, which in this edition (page 48) welcomes Simon Nixon, newly arrived Jersey resident, and founder of Moneysupermarket.com, to the Connect stage. He uses his time in the spotlight to talk about how Jersey needs to get much more competitive, and why recently announced plans to improve IT skills are long overdue.

As ever, I hope you enjoy the read; each edition of Connect lives and breathes for a month, before dying and descending to take its place on the dusty shelves of our basement. We try and include enough interesting material to bring you back to its pages many times during that time - if you have suggestions for more, do let us know.