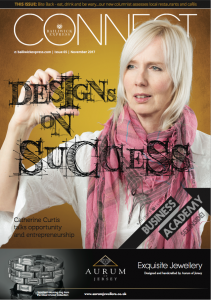 It’s a narrow path to walk. When something fails, do you criticise to hold decision-makers to account, and to fashion a better way of working for the future - or do you accept it, on the basis that without failure there is no success?

The Jersey Innovation Fund (JIF) is a great example - don’t worry, I’m not going to add to the marathon of column inches which have already been written about that ill-starred project, apart from to make one observation. It was a good idea, poorly executed by many of those involved, even though it is currently politically expedient (elections on the way) to wrongly lay the blame exclusively at the door of individual civil servants. And on one side, there are definitely important lessons to be taken forward for future States- managed projects.

But within the abject failure of that particular initiative, there were successes, one of which we profile in this edition on page 62. Catherine Curtis has now repaid her JIF loan, and her business is perhaps one of the small family of poster children who we use to confirm that Jersey can still innovate. In this edition, she looks at the future for Babyhub - where does the road to ‘success’ actually lead?

You’ll find another take on the same subject on page 28. Tom Hacquoil is very open about the fact that one of his previous businesses ended badly; but he believes that failure has been a wise tutor, and if we are frightened of it, we will watch innovation slowly wither, whimper and die.

Of course, no one sets out to fail, but without being prepared to accept it, we will stagnate, and look for more socially acceptable (and less risky) ways to go about our daily work - which usually means rolling out last year’s plan once again.

Ultimately though, while doing nothing that’s new might be more comfortable, it is a downward spiral. Take productivity (page 16). With the average age of the population heading steadily upwards, finding enough money to pay the island’s bills is getting progressively harder. Productivity lies at the heart of that conundrum, which is why successive Councils of Ministers have all tried, and so far failed, to address its continual decline. The related issue of population growth has so far been spectacularly ducked by the current Ministers, who seem to be paralysed by the ‘revelation’ that these issues are actually difficult.

Obviously. But that’s not a reason to sit idly by while they get worse. In this edition, the lady who chairs the panel of expert economists who step back and assess the bigger picture for our economy - you know, the role our politicians used to be able to do for themselves - gives her view on why productivity in Jersey seems to be stuck in reverse, and what we might need to do to change gear.

And if the above issues don’t provide enough sustenance for your busy brain, then feed the stomach instead - on page 38, our new columnist gives an independent, impartial and strictly anonymous view of local eateries. Because if the issues are tough, at least you can fail to solve them over a good meal.