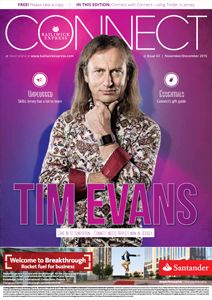 "Life is what happens to you while you’re busy making other plans." For the strategists, planners, thinkers and futurologists in a business, John Lennon’s line from the the 1980 album Double Fantasy (released, with cruel irony, just three weeks before he was shot dead) might give them pause for, yet more, thought.

In the face of ‘events’, how much is all that tiresome thought really worth? The best laid plans can slip frustratingly into the sand, once the full force of day-today waves crash over your desk. We can confidently kid ourselves we are the future’s master as much as we like - but whether it is the star performer who hands in their notice, the trusted business partner who decides to emigrate, or the principal client who moves their business to a different jurisdiction, our plans are just smoke in the wind once life decides to revise, rewrite or rip them up.

Turn to page 54, and you’ll read the story of Tim Evans. When he first installed an Apple iPod in the Salty Dog Bistro in St Aubin in 2004 there was no way he could have truly foreseen the scale to which Apple products now permeate the lives of consumers – yet that is the way which events have fallen, and he has successfully stepped from stone to stone through to this Christmas which will probably see an Apple product top the present lists for another year in succession. Now that’s not to denigrate his achievement by a single pixel – if you believe in Lennon’s framing of how life works then you need to be ready, willing and able to take the opportunities as they come. You need to be open, with your face turned to the wind.

All of which bring us to ‘medtech.’ Like it’s pin-striped brother ‘fintech’ (come on, it’s easy: pick a sector which can grow through technology – clue: it’s all of them – hive off the first syllable and bash ‘tech’ on the end. Now you too can sound like an innovative politician with his finger right on the pulse of business!) medtech is being used as an example of exactly how digital services can diversify and grow the Island’s economy. But on page 28 you’ll read about how a group of industry insiders are concerned that it’s all being left a little too much to chance. You can’t foresee exactly how the cards will fall, and plan in minute detail accordingly – but you can make sure you are ready to take advantage of whichever hand you are dealt. Interestingly, it’s not money they are looking for – it’s engagement.

So, in the year he would have been 75, I’m going to leave the last words for Connect in 2015 to John Lennon - “Reality leaves a lot to the imagination” - we hope our imaginations have found the words and pictures which help you make sense of it all. If not, they’ll be plenty more on the way next year.