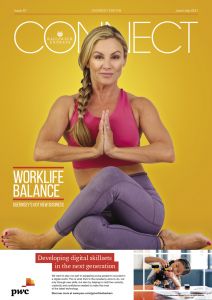 During the lifespan of this issue of CONNECT, Guernsey’s borders are primed to open up to meaningful travel for the first time in what feels like years. In reality, when 1 July comes around, it will have been 16 months, a not-insignificant amount of time.

Nevertheless, the impact, damage and evolution of our lives has been so seismic that it almost makes the time elapsed irrelevant.

The world is very different now, with the cost of covid stacking up in terms of both the financial price paid and some of the subtle and not-so-subtle shifts to our personalities, habits and interaction with others.

The progress of the vaccination programme has brought a significant injection of hope to many, while the re-opening of borders promises to be a major milestone in its own right.

Even in the process of compiling the June/July edition of CONNECT, some of the logistical problems faced in the last year have begun to resolve themselves.

The opportunity to interview Guernsey star footballer Maya Le Tissier, whose teenage career continues to go from strength to strength, was too good to miss.

With the Premier League season just ending, months ago we would have been relegated to a virtual interview at best.

With restrictions softening, the turnaround for a face-to-face conversation became a welcome reality and offered a level of interaction and engagement that just isn’t possible behind a juddering internet stream.

In this edition we have also delved into the stories of a family who relocated to our idyllic island and the agency that promotes Guernsey’s offering in financial services.

Rupert Pleasant became Chief Executive Officer of Guernsey Finance 12 months ago. He sat down with CONNECT to open up on the new global business the organisation’s agents are looking to attract and the financial package that has been agreed with Guernsey’s Government to amplify and target its message to the world.

Hot Yoga enthusiast and instructor Nikki Gibbons moved to Guernsey following an enthralling and eclectic working life. Her new job is founded on her passion for the uniquely challenging form of yoga, which has had to prove very flexible, having seen her new business’s launch abruptly thrown into chaos when the pandemic hit last year.

Her journey, as with many of our other subjects in this edition, is a fascinating tale and testament to Guernsey’s appeal as a place to live and work.