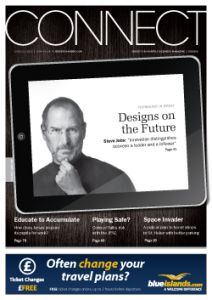 I received a “tweet” the other day with an image attached. It was a picture of a sign that had been placed on the door of a bookshop, containing the quotation: ‘Amazon has generated sales of more than £7.6bn in the UK without attracting any corporation tax on the profits from those sales. We paid enough tax last year to pay for a student nurse – with your help we could pay for a teacher too’.

It’s an example of the growing sense of injustice that some in societies across the globe feel toward the large pan-national businesses; a perception, rightly or wrongly, that they aren’t paying sufficient tax to the government of the countries in which they do business.

That perception has led to the setting up of such protest groups as “Occupy”, whose cause is boosted by an ever increasing income gap, as in the UK the income of the poorest individuals has fallen further behind the average, whilst the richest have moved further ahead.

The finance industry of the Channel Islands thus finds itself in a very difficult place. We sit on the edge of a Europe that is struggling to come to terms with an unprecedented recession. The electorate might be unwilling to swallow the austerity pill because it is felt that the social consequences are too high. So governments fall, as a disgruntled populace seeks out those who are perceived to be responsible for their current predicament. Offshore finance is often a scapegoat which is then in the cross-hairs of newly elected governments.

So where does that leave Jersey Plc., one of the best regulated offshore jurisdictions in the world? There will always be a place for well-regulated offshore centres Jersey, with its great geographical location, and depth of professional skills, has a lot to offer – but as we’ve seen recently with the demise of the LVCR industry, not everyone wants to hear the Jersey tune.

What should Jersey’s strategy be? How do we change perceptions so that we are seen as a force for good (or at least, no harm) and not, as our detractors would suggest, a place where corporations and individuals can avoid tax?  Simply being on the relevant ‘white lists’ is, by itself, no longer good enough.