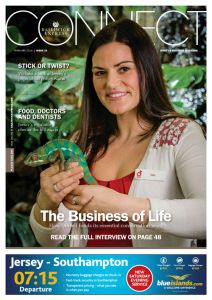 It’s the issue where someone always goes home deeply unhappy. The optimum number of people who should be living in Jersey is divisive, corrosive and riddled with misconceptions. It’s also the issue which underpins much States policy.

One year ago we asked this question in Connect: does prosperity mean more people? Now we have an ‘interim’ answer from the Council of Ministers: yes, and ‘more’ means 325 a year. On page 20 of this edition the politician, and civil servant, behind that policy explain their reasoning, and why they believe such precision can be applied… this time.

The population debate opens up a fault line between those who want to see growth in the economy in order to pay the Island’s bills, and those who want to protect our quality of life. Proving that the two aren’t mutually exclusive, and are in fact exactly the same thing, is the task ahead.

This edition also includes an example of how it is possible to enjoy commercial success, while still focusing on looking after those who need it. Durrell is well known globally for it’s protection of endangered species – but that work is underpinned by its considerable commercial activities, which we take a look at on page 48.

You’ll find similar themes in our profile of an Awards for Enterprise winner, which makes essential reading for anyone considering entering the 2014 event, which has just been launched. Derek Hairon translated his love of the island, and outdoor life generally, into an award-winning business – he describes his ‘sliding doors moment’, on page 40.

Finally, the regulator sets out his plans for 2014 on page 34; the main market study for 2014 is into doctors’ and dentists’ fees – two issues which are almost as controversial in Jersey as population numbers.