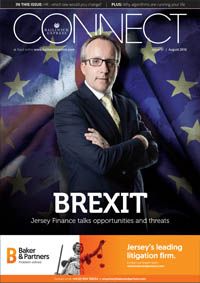 By way of explanation they say, “well, the States aren’t sitting,” as if the activities of our esteemed group of politicians are the lifeblood of the local business community, and without them, we all sit forlornly pining for the next instalment of provocative politics, incisive industry and stimulating....ok, you get the point.

Well, here at Connect, with the honourable exception of our columnist, The Fool, life continues as normal. To be clear, I don’t mean that The Fool has finally met his comeuppance, and been viciously stabbed to death with his own poison pen - simply that the well of inspiration always needs to be refilled, usually with a fine burgundy, and The Fool is busy wetting his lips ready for another season of leading us down the paths less travelled in the Island’s public life. Basically, he’s on holiday.

Either that, or he’s still to surface from the shock of Brexit, which has the distinction of actually being something which was genuinely surprising.

Moments on which whole political epochs turn are rare; Brexit was one of them, and the way forward is still, essentially, unclear.

I say it was surprising, but clearly not to the Island’s Ministers who were swift to point out that actually they had been planning for it for years, and had Jersey’s reaction all organised - we are going to.... cue drumroll... ‘wait and see.’

I’m not for one moment suggesting that’s not the right thing to do - it’s just not something I’d have thought needed years to plan - could it actually be a holding position dreamt up very early on the morning of the announcement, while the whole of Europe was rubbing its eyes and blurting out, “What, really?”

At the sharp end of dealing with the fall out are Jersey Finance, and so on page 18, their Deputy CEO Richard Corrigan sets out how the cards might fall for Jersey,
as well as dealing with a survey published at the same time which suggested that the Island’s critical banking sector had started to (marginally) shrink - the timing was not ideal.