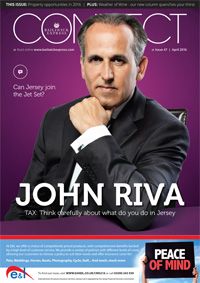 “War is composed of nothing but accidents... there is but one favorable moment, the great art is to seize it.” They are the words of Napoleon, but stick with me on this (you’ll need to), I’m going to use them as a thread linking international tax changes, the effect on Jersey of Brexit...and the People’s Park. Sitting comfortably?

Starting on page 22, you’ll find a section on BEPS - flip open the lid on that delightfully simple acronym, and sitting smugly inside is a complex tangle of potential law changes, led by the OECD, all relating to where a company should pay tax. It’s a major issue facing the financial services industry, who must decide whether to remove uncertainty for businesses and act quickly; or stay a little behind the regulatory curve, and let others make the mistakes first. So there you have the first knot in my Napoleonic thread - when is the right moment to seize the initiative? We must decide.

In the same section, you’ll find the comments of one of the Island’s leading tax experts on ‘Brexit.’ OK, this time, the abbreviation is a little too clever for its own good, but I suspect that for most, the issue it conceals will hinge on a snap emotional judgement (despite what the aeons of media commentary might pretend) rather than a cold and rigorous analysis of the pros and cons.

Not that we will get to snap our emotions in Jersey - the Ministers didn’t ask for us to have that privilege. But our friends in the north will be deciding if now is a favourable moment to go it alone, and their decision will undoubtedly have important ramifications here, not least that, presumably, we may be forced to renegotiate our own relationship with Europe, when the current arrangements actually serve us very well. But what about the People’s Park? Right, here goes.

The first clause in the opening quote talks about ‘accidents’ - and let’s face it, for the Council of Ministers so far in 2016, there have been a few of those. From flights to ferries to fuel farms it’s been a horrible month, particularly when you throw in snubbing the nascent local digital industry for the main e-Gov contract, and the tactical withdrawal over the People’s Park (we got there) once it became clear they were going to lose the States vote for their preferred choice (shhh, it was only an ‘option’).

On page 6, we take a step back from what has, to date, been a ministerial annus horribilis, and try and tease out some indications of whether there is a “favourable moment” that they need to seize coming along any time soon, let alone doing what Napoleon called the “great art”: actually doing something about it.

Enjoy Connect - it helps clear up those little accidents.