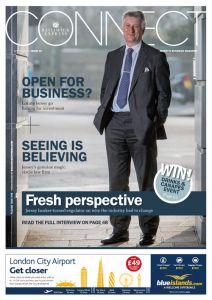 Were you born to do the job you do now? Do you begin work everyday comfortable in the knowledge that, at least from a professional point of view, you are in the best possible place? If you have answered yes to those questions, then here’s a thought for you: I think you are on a slippery slope. No? Well, consider the evidence of three of our features in this month’s Connect:

Exhibit 1: The Director General of the Jersey Financial Services Commission, John Harris, is currently in the third iteration of his career. From practitioner, to States policy adviser, to regulator, he has steadily rotated his perspective on the same industry. Adapting to the requirements of each move is the constant theme that connects it all together; and each one brings fresh understanding. You can read his story on page 48.

Exhibit 2: Still not convinced? How about Wayne Gallichan, who you’ll find on page 20. He now leads the team at Locate Jersey, with a remit to encourage people to invest in Jersey, and so create jobs here and prosperity. Previously, you would have found him in the Regulation of Undertakings office, where the conversation with someone looking to recruit from outside of Jersey would have been rather different. Same question, fresh perspective.

Exhibit 3: Have you changed your mind? Still no? Well, in that case, perhaps we need a touch of magic, an ace-in-the-hole? And for that, I call Olaf Blakeley, currently an Advocate of Jersey’s Royal Court, but previously a professional magician, and BBC news presenter. On page 64, he tells a story which entwines his own transition from 14-year-old school leaver to qualified advocate, with the final years of Jersey’s cabaret scene which saw audiences abruptly dwindle and venues close.

Final thought for the jury: and if there are still some lingering doubts, I give you the exception which proves the rule – Les Smallwood (page 56) has been an air traffic controller throughout his career. He now heads the team in Jersey.

Case dismissed, m’lud. I hope you enjoy reading the evidence in full, and please do let me have your verdict on editor@bailiwickpublishing.com.