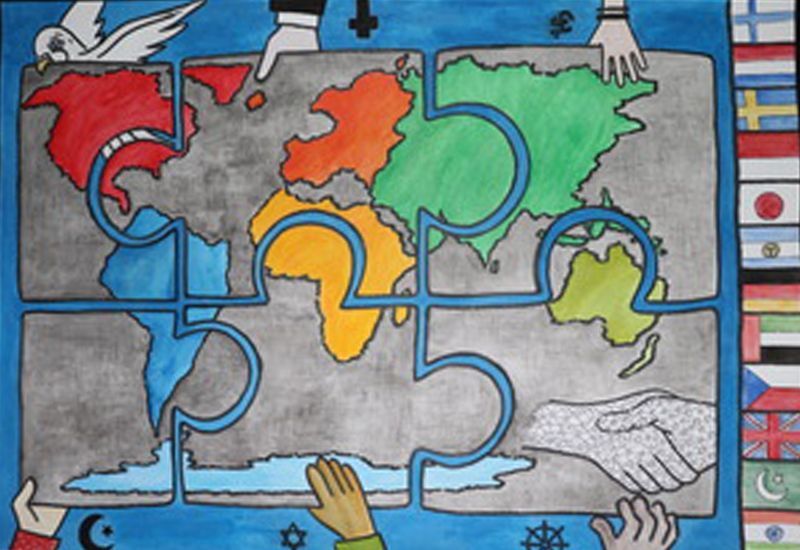 Paul Allaway, Youth Chair of The Lions Club of Guernsey is pleased to announce that the winning entry from Les Beaucamps High School has progressed through the Lions District final to the national UK Final of the Lions International Peace Poster competition with this year’s theme of “We are Connected”.

The competition open to 11, 12 and 13-year olds, was last run locally in September 2019 and was well supported by La Mare de Carteret High School.

The children taking part had to design a picture symbolising Peace with the theme of “We are Connected” and produce artwork that was no smaller than 35cm x 50cm and no larger than 50cm x 60cm. They were not allowed to use any lettering or numbering on the poster.

Each year Lions clubs around the world sponsor the Peace Poster Art contest in local schools. The contest encourages young people worldwide to artistically express their visions of peace.

During the last 20 years more than 4 million children from 100 countries have participated in the contest.

The local competition closed on 15 October with the art teachers from the two schools choosing five posters to go through to the local final where, local artist, Tiffany Matthews selected an individual winner from each school.

There are three criteria for the judges to consider at each level of the competition: Expression of theme, along with artistic merit and originality,

The winning entry from Stella Burrows of St Sampsons High and Malia Pushpa of Les Basecamps High were submitted to the district final along with entries from other Lions Clubs in the district including Petersfield, Swindon and Ringwood and Fordingbridge.

Each individual school winner will receive a gift voucher for £50 to be presented shortly.

Judging of the District final was carried out by judges from Fareham Lions clubs overseen by Frances Bond Peace Poster Advisor also Fareham Lions and Malia’s poster was selected as the winning entry.

Rob Sweeney from Les Beaucamps had the following comment to make….

“Since joining Les Beaucamps High in yr 7 from Bangladesh, Malia has proved herself to be a talented and committed student in all her studies. Her enjoyment of art in particular is something that has stood out for me as well as the hours of additional practice she puts in at home. Despite language difficulties she is articulate and expresses poignant and meaningful ideas in her work which are also personal. In addition to this she is an extremely positive and kind person and rarely without a smile”.

At the moment all assemblies are being cancelled and details of a presentation have yet to be resolved.