UK battered by storm for second weekend in a row 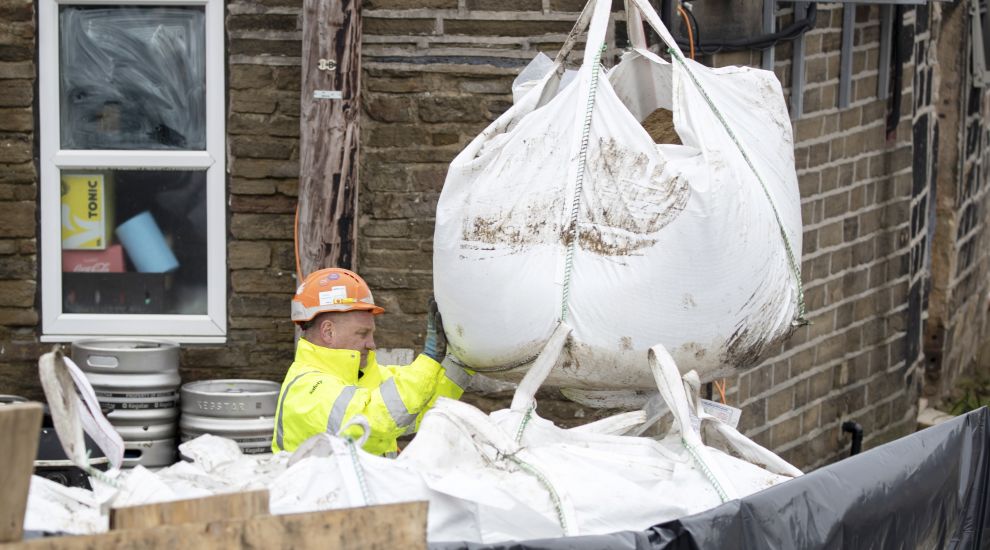 UK battered by storm for second weekend in a row

Storm Dennis is causing a second weekend of disruption with bad weather wreaking havoc across the UK.

The Ministry of Defence (MoD) has deployed British Army personnel to assist people in West Yorkshire, which was badly hit by flooding during last weekend’s Storm Ciara.

Flights have been grounded for safety reasons, with British Airways and easyJet confirming cancellations.

More than 230 easyJet flights in and out of the UK on Saturday have been cancelled, while several sporting fixtures were also called off due to the weather.

Two bodies were pulled from rough seas on Saturday before the worst of the storm hit.

One man was found following a huge search operation off Margate after an early-morning distress call, while another was found at Herne Bay.

Lifeboats and the coastguard helicopter had been scouring the sea near Margate Harbour after reports of a man overboard, HM Coastguard said.

An emergency search was launched after LPG tanker B Gas Margrethe reported that one of its crew was unaccounted for.

He had been last seen several hours previously, and following a search of the ship it was assumed he was missing overboard.

The 99-metre Maltese-flagged ship had been anchored off the coast of Margate.

Police are trying to establish the man’s identity so that next of kin can be informed, a spokesman said.

In the other incident, Kent Police were called at 12.15pm on Saturday to a report a person had been pulled from the sea in Herne Bay.

The US National Weather Service’s Ocean Prediction Centre reported winds up to 92mph and waves that could reach more than 100ft (30m) high across the North Atlantic early on Saturday.

Forecasters were expecting winds to reach 70mph along coastlines, while some parts of the country could witness up to 4.7in (12cm) of rain.

Experts have warned that conditions amount to a “perfect storm”, with hundreds of homes at risk of flooding.

The Met Office has issued eight weather warnings covering most of the UK this weekend.

This includes amber warnings from midday on Saturday over southern Scotland, northern England, Wales and part of the South West saying that flooding could cause a danger to life.

A spokesman for British Airways said they are “merging a small number of Heathrow short-haul flights to the same destination and using larger aircraft where possible to minimise disruption”, while a spokeswoman for easyJet confirmed 234 cancellations.

Ryanair said all its flights are operating as normal.

A spokeswoman for Heathrow Airport said: “To minimise the number of flights cancelled at short notice we have taken the joint decision, alongside our airline and air traffic partners, to pre-emptively consolidate today’s schedule.”

A spokesman for Luton Airport said the airport is “fully operational”, but added that “a number of cancellations” are expected later on Saturday.

The MoD said 75 personnel from 4th Battalion, Royal Regiment of Scotland, will be aiding the Environment Agency (EA) in constructing barriers and repairing flood defences in Ilkley and Calderdale, while 70 Reservists from 4th Battalion, The Yorkshire Regiment, have also been tasked with providing support where required.

Defence Secretary Ben Wallace said: “Our armed forces are always ready to support local authorities and communities whenever they need it. The rapid response of the Army today will help with provision of flood relief to local communities in West Yorkshire.”

The EA said flooding is likely to be worse than under last weekend’s Storm Ciara due to rain falling on already saturated ground.

North Wales Police said very high winds had led to debris and branches falling off trees and Cornwall Fire and Rescue Service said it had rescued a motorist from a car stuck in flood water in the Liskeard area.

Power cuts are also expected and there is a good chance that train and buses will see cancellations or delays and roads closed.

The Met Office said the “main areas of concern” on Saturday are north and south-west England and Wales, with the South East bearing the brunt more on Sunday.

Flood defences are due to be in operation this weekend, with additional temporary flood barriers being installed in Shropshire, Lancashire, Yorkshire and Surrey.

More than 500 staff are on active incident duty and 30 mobile pumps have been deployed, the EA said.

Network Rail has advised passengers to expect disruption on many routes due to flooding and to allow more time for their journeys.

Meanwhile, people living near the railway are being urged to secure any loose items in their gardens, after several trampolines were blown on to tracks and overhead electric wires last weekend, blocking lines.

In Ireland, Met Eireann has issued warnings for the whole country, with severe gusts of up to 74mph (120km) possible in Donegal, Galway, Leitrim, Mayo, Sligo, Clare, Cork, Kerry and Limerick.