Protesters march against Trump and Nato 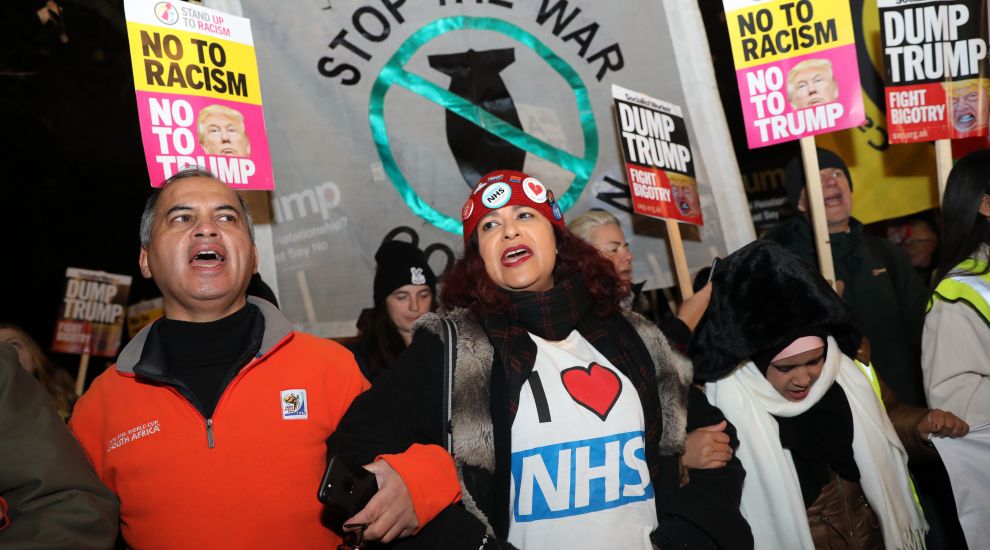 Protesters march against Trump and Nato

NHS workers and anti-war activists have led a protest targeting US President Donald Trump and Nato in central London.

Hundreds of protesters gathered in Trafalgar Square before marching towards Buckingham Palace, where Mr Trump and other Nato leaders are being hosted by the Queen on Tuesday night.

Many in the crowd held aloft placards bearing messages such as “No to Trump, No to War” and “Trump, Hands off our NHS”.

Some protesters expressed concern over the possible impact of a future trade deal between the US and the UK affecting the NHS.

Raoul Li-Everington, 27, a junior doctor working for the NHS in north London, said the health service was in “decline” due to “austerity” policies.

“It’s clear to me that the next step is for the Americans to start investing in the NHS, buying up the NHS,” he said.

“That only leads to universal coverage not existing anymore,” he added.

“People will have poorer care and we will inherit a lot of America’s health problems in terms of their system.

“I’m here on behalf of all the junior doctors in this country worried about the path the NHS is heading down, which is depressing.”

Dave Bell, 66, from London, who worked as a mental health nurse for 45 years, said he feared the NHS being “broken up” by private organisations.

“Health is not a commodity to make a profit on and that’s exactly what’s happening in America,” he said.

Desiree Cranenburgh, 62, from Hammersmith in London and a former NHS employee in its pharmacy department, said: “I don’t think we can trust Trump and Boris Johnson on not doing some sort of a deal, it’s big business (for) the pharmaceutical companies.”

She added: “The cost of drugs… it could be that they will rocket out of control.”

Police gradually allowed protesters to make their way down The Mall on Tuesday night as official cars with police escorts sped past on the other side of the barriers.

Ahead of the march, protesters at Trafalgar Square cheered and applauded speakers addressing them from a lorry parked at the base of Nelson’s Column.

Some held placards bearing a range of political messages for Mr Trump, including in relation to Palestine and Cuba.

A group of protesters carrying flags and banners called on Nato and Turkey to stop their “war on Kurds”.

Others in the crowd said they were protesting against the Nato gathering in London.

Sue Roebuck, 73, from London, said: “I think Nato is a warmongering organisation, it’s not there for peace at all.”

“It’s all about militarising the whole world,” she added.

She argued investment in tackling cyber crime and environmental concerns should come before spending on the military and nuclear armaments.