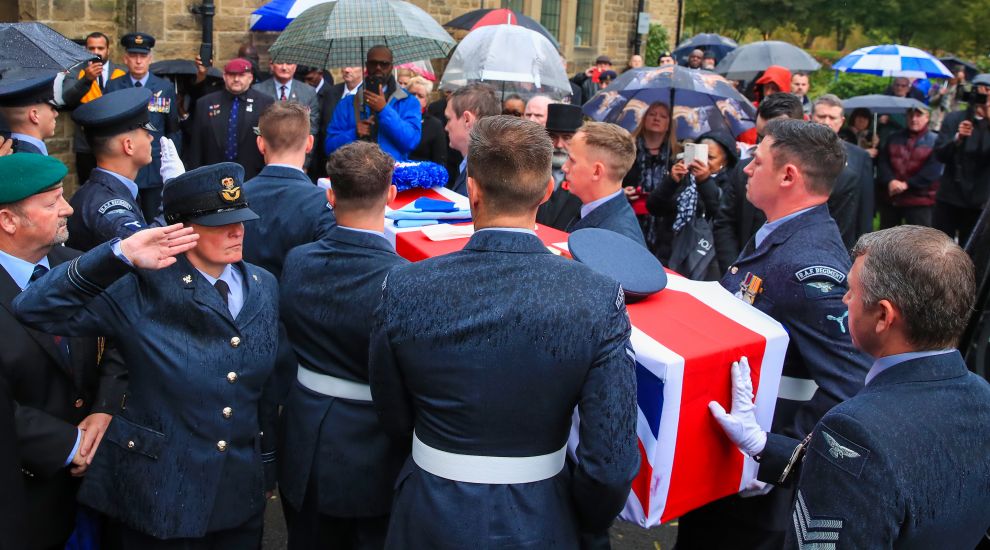 Hundreds of people have turned out to pay their respects to a veteran who died with no known family.

Members of the public were invited to the funeral of 100-year-old RAF veteran Oswald Dixon after a plea from the care home where he lived.

On Wednesday, Mr Dixon’s coffin, in a remembrance hearse decorated with 100 poppies, was taken from the Broughton House home for veterans in Salford to Agecroft Crematorium in Swinton, Greater Manchester, where hundreds of people had gathered in the rain.

Mr Dixon, who joined the RAF in 1944 after arriving from Jamaica, died on September 25.

Broughton House, where Mr Dixon had been a resident since May 2015, posted details of his funeral on its Facebook page.

It said: “It is with regret that Oswald has no family members in the UK and his funeral will take place at Agecroft Crematorium on Wednesday 9th of October at 2.20pm.

“At his 100th birthday celebration Oswald stated that he ‘always tried to live life as it should be lived, by doing things for other people’.

“His warm character will be missed by everyone involved at Broughton House.”

At his funeral, serving members of 34 Squadron RAF Regiment and RAF Cadets formed a guard of honour as the coffin was carried into the chapel.

Veterans minister Johnny Mercer MP attended the service, conducted by Co-op Funeralcare, along with representatives from the Ministry of Defence, the Royal Air Force and Salford Council, Broughton House residents and staff and the Ceremonial Mayor of Salford Council Charlie McIntyre.

Mr Mercer wrote on Twitter: “A huge privilege to attend the funeral of 100 year old RAF veteran Oswald Dixon in Manchester this afternoon.

“He died with no known family; but actually had a huge one who all turned out today. ”

The Last Post was played and hymns Amazing Grace and Eternal Father in the Sky were sung.

Chris Lindsay, chief executive of Broughton House, said: “On behalf of all the residents and staff at Broughton House, I would like to thank the veteran community, the people of Greater Manchester and all those who travelled from afar for showing their tremendous compassion and support to a veteran whose warm character will be missed by us all.”