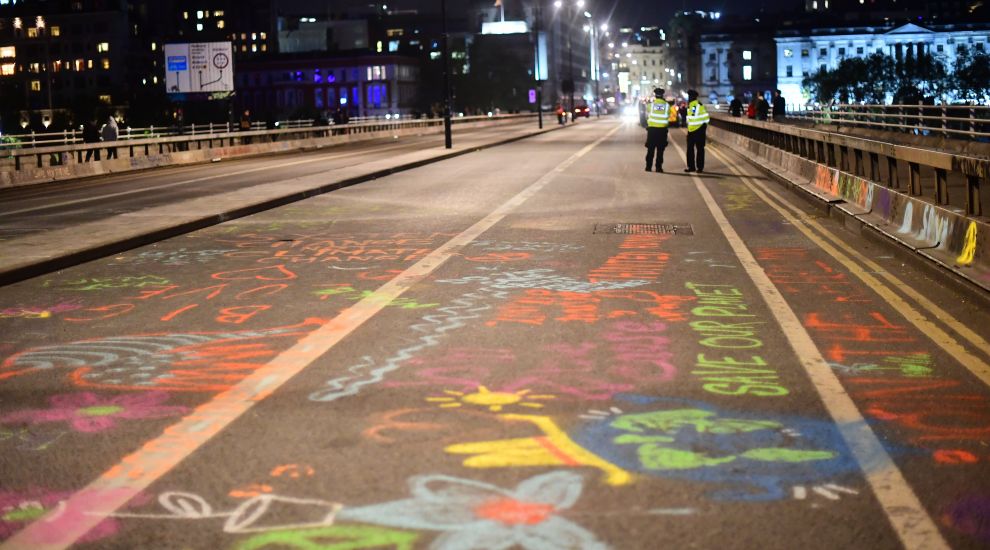 Protests calling for the Government to declare a climate emergency are set to enter a second week after nearly 1,000 people were arrested during the first seven days of Extinction Rebellion demonstrations.

Activists have stopped traffic in a series of demonstrations across London since Monday with actions including fixing a boat at the junction of Oxford Street and Regent Street, occupying Waterloo Bridge and disrupting the Docklands Light Railway by climbing on a train.

A total of 963 people had been arrested as of 7pm on Sunday while 40 have been charged in connection with the XR protests, the Met Police said.

Olympic gold medallist Etienne Stott was one of the activists arrested on Waterloo Bridge as police cleared the final section of carriageway on Sunday evening.

The London 2012 canoe slalom champion was carried from the bridge by four officers at around 8.30pm as he shouted of the “ecological crisis”.

Members of Extinction Rebellion are suggesting temporarily ending disruptive tactics to focus on political negotiations as they enter the eighth day of campaigning.

A spokesman said there would be no escalation of activity on Bank Holiday Monday, but warned that the disruption could get “much worse” if politicians were not open to their negotiation requests.

The group will no longer hold a picnic on the Westway by Edgware Road Underground station, which would have stopped traffic on the busy A-road on the last day of the long Easter weekend.

Instead, at Marble Arch, the only police-sanctioned protest space, activists will meet to “vision what’s going to happen in the coming week”, an Extinction Rebellion member said, as she introduced Swedish activist Greta Thunberg to the stage.

The 16-year-old was met with cheers as she walked on stage and told a crowd of hundreds that humanity was at a crossroads.

Earlier on Sunday, in what the group later said was an internal memo intended to garner feedback from members, Farhana Yamin, the group’s political circle co-ordinator, said the group would shift tactics to “focus on political demands”.

She added: “Being able to ‘pause’ a rebellion shows that we are organised and a long-term political force to be reckoned with.”

The proposal suggests negotiating with the mayor of London, Sadiq Khan, and Metropolitan Police, to agree that they be allowed to continue their protests at one site in London.

Members would commit to not disrupting other areas in exchange for Mr Khan speeding up the implementation of the Declaration of Climate and Ecological Emergency, and considering setting up a London Citizens’ Assembly.

They will also set up a political taskforce to take forward public negotiations with the Government, warning that they are prepared to scale up action depending on how much progress is made.

Neither the Met nor the Mayor’s Office would say whether they were considering the proposals.

Boris Johnson, Mr Khan’s predecessor as mayor, wrote in the Daily Telegraph that he was “not in favour of paralysing public transport in the greatest city on earth” and said the UK was a “world leader in reducing the greenhouse gases that are associated with climate change”.

He wrote: “I am not saying for one second that the climate change activists are wrong in their concerns for the planet – and of course there is much more that can be done.

“But the UK is by no means the prime culprit, and may I respectfully suggest to the Extinction Rebellion crew that next Earth Day they look at China, where CO2 output has not been falling, but rising vertiginously.

“Surely this is the time for the protesters to take their pink boat to Tiananmen Square, and lecture them in the way they have been lecturing us.”