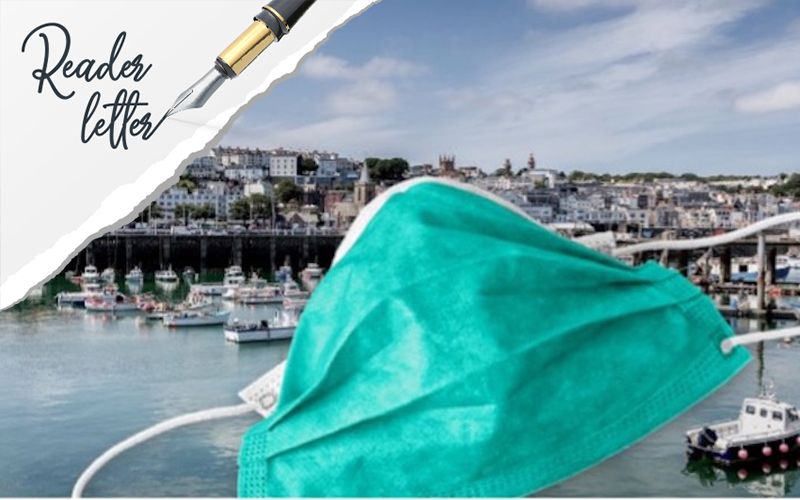 Dr David Nabarro, the Special Envoy on Covid to the World Health Organisation, said on BBC Television in the past few days that he wanted to reiterate that the WHO had never recommended 'lockdown' as policy because of the damage it causes, that shielding of the vulnerable is preferable, and that we must now move on and learn to live with the virus.

The damage in Guernsey is certainly now clear to see: crippling debt incurred; tax increases on the way; a tsunami of mental health illness now threatening to swamp those services, including in children's mental health; huge pressure on the local health service because of the blinkered concentration on Covid at the expense of everything else; reports of unprecedented levels of domestic abuse; and of course the lasting damage to children's education. Even now it seems that children's education is still being disrupted, and masks for children at school becoming mandatory again, when we all know, or should know from reliable sources - including the ONS data - that serious illness and death in children from Covid is statistically so small that it fails to show up on a graph.

The virus is now endemic so it will never disappear. According to the WHO and other sources we know that in a vaccinated population with high levels of natural immunity as well, Covid now has a CFR that is not dissimilar to flu. We also know that the majority of cases are asymptomatic and it will circulate for ever more much like flu does and as do other respiratory viruses. Experts say there will always be waves of Covid everywhere, at different times, but there is now a wall of resistance to Covid in the shape of vaccines and extensive prior exposure to the virus. ONS data for late October 2021 shows that over 92% of the UK adult population have antibodies to Covid either from vaccination or prior infection and for children under 16 it is over 80%.

It is likely to be very similar in Guernsey. So this is the best we can ever realistically hope for, and it should signal a return to normal life in Guernsey. However I fear this is not to be the case, and we will live in a sort of twilight world with a sword of Damocles of restrictions hanging over our heads. That is surely no way to live because it is freedom only in name.

The responsible way to behave now is surely to tone down the rhetoric and not ramp up fear, otherwise we will end up in a dark authoritarian cul-de-sac. But last week Dr Brink made a recommendation about mask wearing with sombre warnings about certain case levels triggering further restrictions. A lady interviewed on local radio said she would wear her mask in the car. When asked if this would be when she is with other people, she said she would wear it even when alone in the car. Another sad insight into the irrational fear being stoked and then perpetuated by ill-advised announcements is that church goers - many of whom are quite elderly and almost all of whom are fully vaccinated - must now sit in their churches with all the doors wide open and wearing masks. How sad! We are also being told that we are recommended to use a lateral flow test twice a week. Is this not madness and misery rolled together?

When passengers arrive in Guernsey they are met by numerous CCA operatives in full hazmat suits, including sometimes wearing foot protection, as if we are fighting raging Ebola or the Black Death. So a sense of fear is constantly induced, and then amplified by the barked orders, the corralling of people into what are often long lines of queues, and of course the mandatory wearing of coloured wrist bands. Is that the intention? Why is there still a need for a continuing wall of people dressed in hazmat suits with all the intrusive travel checks and the concomitant delays, when will this end if it doesn't end now, and what on earth is this costing the taxpayer? Is this the CCA's peculiar idea of our 'new normal'?

I can report first hand from recent experience that the arrival process and genuine 'welcome' is so pleasantly different and proportionate in, for example, Spain and Gibraltar. The sense that the crisis is now over is a pervasive one, and what I describe above about the arrival 'experience' in Guernsey is not part of the process in other places, including when arriving in the UK. It is clear that there is a strong belief elsewhere that life must return to normal - and not just the lip service paid to that idea by the CCA. The speed through arrivals and the common sense and proportionality applied in other places couldn't be more different from what is still happening in Guernsey.

Where we should as an island have now moved firmly towards genuine normalisation as the guiding policy, we have been told by the Chairman of the CCA that various restrictions will continue for a very long time indeed. This is ominous and, many would argue, is once again a disproportionate response.

It also seems that certain people on the CCA are pushing for the Director of Public Health - an un-elected official - to keep indefinitely the already hugely beefed-up emergency powers she has to direct and control the population on a whim and to detain members of the public at her discretion. This will, one assumes, also mean that the CCA will conveniently (for them perhaps) maintain an unwavering hold on their near absolute powers to rule by diktat for an indefinite time, and with no proper accountability, as has been the case for the past 18 months. I do not believe that this is at all healthy in any democracy, and I am confident that many people on the island share these serious concerns when there is no emergency at all - including the very politician who initially introduced the Emergency Regulations last year.

The notion that there is an emergency now is in my opinion a convenient conceit being used by the CCA to cling on to anti-democratic absolute powers, and this should be fiercely resisted for the nonsense that it is.

The prescience of Edward Burke should perhaps be noted, when he wrote: 'The greater the power, the more dangerous the abuse'.

A small handful of deputies - who should be applauded for their independence of thought - have taken a stand and questioned this ongoing extension of emergency powers, and voted against the extension, but all the while the other deputies ask few if any pertinent questions and compliantly just nod it all through, in my view meekly. What will it take for these deputies to stand up and be counted on this fundamental issue of our rights and our freedoms on this island?

The vitriol and threats meted out to local A&E Associate Specialist Dr Scott Mitchell for daring to question (incidentally as the U.K. JVCI had already done) the ethics of vaccinating young children - because they are not at risk from the virus, and never in human history have children been expected to somehow take any risk at all to protect older generations - was shocking, but emblematic of what happens when the CCA orthodoxy is challenged. Such is the degree of concern around the Covid-related arbitrary decision-making by the CCA that Dr Bridgman, the former Medical Officer of Health in Guernsey, felt that he had been left with little alternative than to take Dr Brink to court. This should all send a shiver down the spine, as should the freedom of expression implications in the refusal by the Committee for Education, Sport & Culture to allow a perfectly legitimate local health alliance group from holding a public meeting in taxpayer-owned premises, apparently because views could be expressed that would not tally with current CCA Covid Orthodoxy - so this is a clear example of censorship at work, and it has a strong whiff of what one would expect to see in China or Russia, where freedom of speech is also routinely snuffed out.

In my opinion, if we do not draw a clear line in the sand now, and say enough is enough, we will be in the same position as we are today, next year, and for many years to come, with restrictions of all sorts and with the absurd spectacle in a Covid protected population, of people who test positive for the virus being locked up under pain of severe punishment including prison sentences, children being forced to wear masks, and all the other tools of interference and control.

We risk ending up, through complacency, with a system of rule on the island that increasingly resembles a health dictatorship, with very few people - as is already the case - feeling comfortable expressing views and opinions in public that do not conform with the prevailing Covid orthodoxy as promulgated by the CCA - and even then, there is in my view now only one newspaper on this island with editorial independence that is willing to publish without fear or favour, and that is the Bailiwick Express - so there is at least hope for the continuation of freedom of expression.