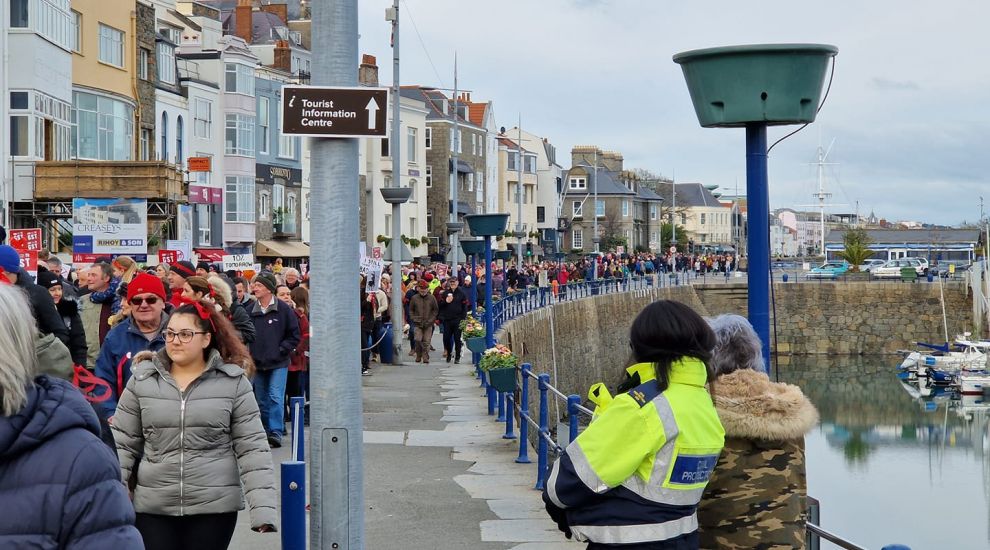 Thousands of people marched against GST yesterday, reminiscent of the 'pause and review' rally which so dismantled the approved plans for education that it cost my former colleague his political career. Will similar happen again now the strength of feeling against a goods and services tax has been shown?

Many will remember well the past protests against banning smoking indoors, making passengers wear seatbelts in cars, and the march against developing Belle Greve Bay.

By contrast those protests had far more support than yesterday's anti GST march - and only one of them was successful. Belle Greve Bay is still undeveloped (for now).

Smoking indoors is unheard of for a generation of young adults, while putting your seatbelt on is second nature when getting in the car. Would you have signed a petition against those at the time? Would you now? Maybe GST will be approved and will become as normal as anything else in time.

There were an estimated ten thousand people marching against the Belle Greve Bay plans and they won.

That's around five times as many as turned out to say no to GST. That is not to underestimate the impact yesterday's efforts will have had. The most recent example of a public protest was of course the 'pause and review' rally against the 'two-school model' and that one worked. The plans were shelved, Matt Fallaize lost his seat at the next election, as did others who supported his model.

Whether we are any better off now is debatable. We're supposed to be having three 11-16 schools, and a separate sixth form college. Few people can remain confident in the delivery of those plans without further delays and expense.

So what good does a protest do?

If nothing else - it gives the politicians a snapshot of what the public want. A small percentage of the public, but it's still a visual example of feeling against the tax plans.

And if you look at our constitution - our politicians are 'Peoples Deputies' - therefore it's not unreasonable to expect them to represent our views, and to be swayed by those who shout the loudest.

If they don't represent our personal views we can each have our say at the ballot box, and the next time we are scheduled to do that is in 2025.

2025 is also the date that the proposed GST is due to come in.

Will any of P&R fall on their sword before then if their plans are defeated this week? Not without another fight I expect.

Deputy Ferbrache is adamant GST is needed and he's unlikely to give up easily.

Like Deputies Roffey and Le Tocq, he's a long-time politician and popular with many people. The new-comers to the States and the senior committee - Deputies Helyar and Mahoney - may find the GST battle follows them through the rest of this term, and whether they enjoy success or suffer defeat this week, the issue will dog them all the way through to the next election.

On the face of it, it is now looking increasingly unlikely that P&R will be successful this week though.

Despite votes often just tipping in favour of the 'ruling coalition' led by P&R, GST could prove to be too contentious an issue for many who'll get to vote on it.

Little separates a Guernsey man or woman from their money. Historically short, with deep pockets, and long memories, any perceived threat to the hard earned income of a donkey is always met with opposition. That much was obvious on Sunday.

Hundreds were at North Beach by 13:45. The march was supposed to leave at 14:00 but people were still arriving. Eventually leaving at quarter past, filling the town quay, flanked by civil protection officers and police, the protest was visually a success. The organisers had made their point - the people present did not want GST.

At the Market, a couple of thousand people heard speeches against GST and advocating cuts in States spending, corporate taxes and other income streams rather than adding charges on to goods and services across the board.

It would be foolish to think that was enough to persuade P&R to drop their plans - they won't - they will battle on to the very end. But a protest like this does give them a warning of what the public think.

They have also given us a warning though - P&R have said that we need to increase the tax take or cut public services. They may be expected to resign if their plans fail - but Deputy Ferbrache has already said he won't. Maybe he's got a few more tricks up his sleeve to gather enough political support on this one, or maybe he'll perform a u-turn and say he's listened to the will of the people? Could he snatch his popularity back from the sacrificial altar of public opinion?

Whatever happens, we can't underestimate Deputy Ferbrache, that is for sure. But nor should he, or any other politician, underestimate the will of the people.