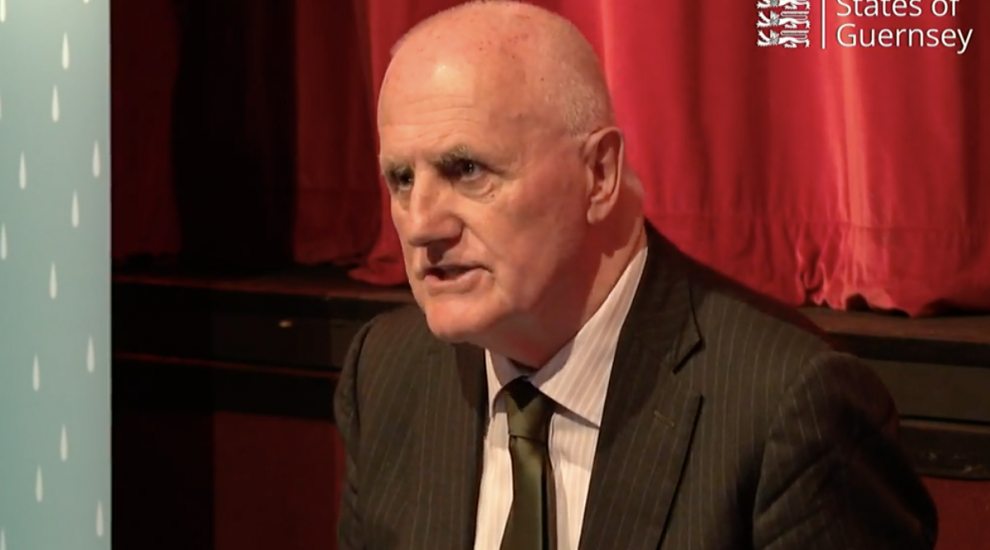 The Chief Minister’s “inappropriate” comments at the latest CCA media briefing “made himself the story” at the expense of the important announcements being made, writes Tim Chesney.

“I tried to imagine when a very senior politician in any democracy, and at a Covid media briefing, would feel it appropriate to close off the event by saying that "...I would hope that some people, who are making comments, will crawl back under their stones". It certainly stretches the imagination.

But these were the words of the Chief Minister and Chairman of the CCA at the Covid media briefing on 21st September.

Deputy Ferbrache used that high profile platform - with the reach that this affords him as Chairman of the CCA- the de facto Government of Guernsey given the near absolute powers still vested in the CCA - in answer to a specific question about 'leaks' from the CCA.

He named people who had made what he considers to be improper comments about him, and he also used the occasion to make his case on several fronts, direct to the public. It was, I think, a jaw dropping moment.

What did all of this have to do with a CCA Covid related statement? In my view precisely nothing at all. At the end it became all about Deputy Ferbrache and his personal clashes with others, and I do not believe that he should be able to use that high profile platform in the way he did.

Deputy Ferbrache is in politics, and sadly if he can't take the heat then he should get very well clear of the kitchen. Thin skinned and politics, even on a minuscule island like this, are not good bed fellows.

We learnt a lot - probably too much - from the Chairman of the CCA at that press briefing about his personal life. Among other things we now know that "he has been accused of being corrupt", also of "fancifying" self isolation - whatever that means in that context - and that "a person's sexuality is a matter for themselves", but that he is not "gay".

He went on to say that images had been circulated of him and another man in some form of sexual act. Did we need to know this and was it wise to say this in the public forum of a CCA media briefing or for him to career off into a generally defiant statement on several topics concerning him and his personal battles with others? Would it matter if he is 'gay'?

I imagine that very few adults on this island care what his personal sexual proclivities are. So why does he mention these things and is it remotely dignified for the Chief Minister to say these things when he is representing the Government of Guernsey at a media briefing?

What I do care about is Guernsey and its reputation. I don't think that it makes for good listening to hear the individual who holds the three highest political offices in our island using the platform that the CCA affords him, to attack specific individuals.

In my opinion he also used that privileged position to try to burnish to the electorate his own credentials in a way that was not afforded to other elected representatives. He did this by defending what he has done or not done, and he was able to do this without any interrogation.

“It may, ironically, have amplified issues that he would have been wise to leave alone”

One could perhaps conclude that he was trying to snuff out rumours now swirling around about his involvement, or not, in various media reported happenings, whether that be 'Gatland-gate', 'Farmhouse-gate', 'leaks from the CCA, and it has to be said, other stories as well such as 'CEO-gate' that he didn't refer to. All of these stories are of genuine public concern. People are still seeking clear answers from him to specific and serious questions.

In my opinion, Deputy Ferbrache has clearly overstepped the line of what is appropriate from a senior politician in public office by using the platform of a CCA media briefing to make these claims and rebuttals for his own ends, and by doing that he has made himself THE story.

This detracts from what was the actual purpose of the media briefing - so what he did was not helpful at all, and I believe it may, ironically, have amplified issues that he would have been wise to leave alone.

I think it is all to the detriment of Guernsey's reputation, and it could well have a tendency to make a mockery of the island in the eyes of those looking at us. After all, how would the outside world view this bizarre behaviour?

Could one imagine any serious politician, anywhere in western Europe, closing off on an important Covid media briefing with the words ".....I would hope that some people, who are making comments, will crawl back under their stones". I think most of us know the answer to that."