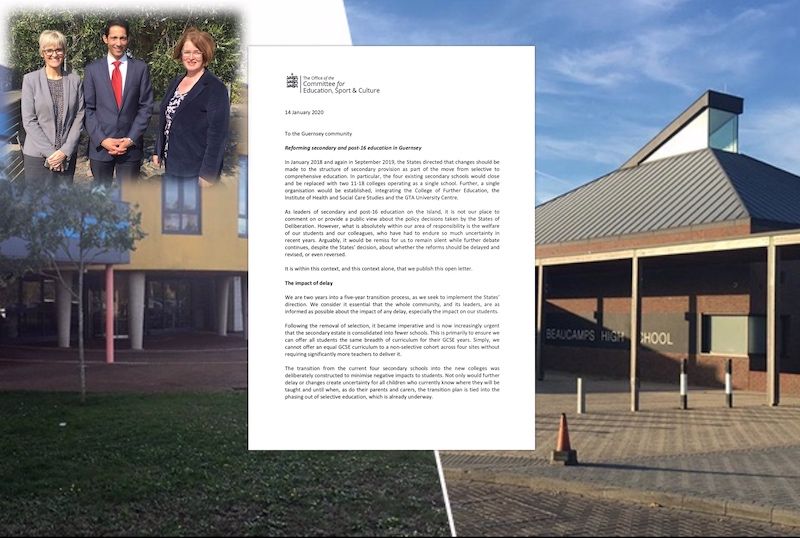 Senior educationalists across the island's public secondary schools and further education institutes have penned an open letter asking people to embrace the one school model, as they have, so they can get on with delivering "the best model we can, with what we can afford, to benefit as many students as possible".

"In January 2018 and again in September 2019, the States directed that changes should be made to the structure of secondary provision as part of the move from selective to comprehensive education. In particular, the four existing secondary schools would close and be replaced with two 11-18 colleges operating as a single school. Further, a single organisation would be established, integrating the College of Further Education, the Institute of Health and Social Care Studies and the GTA University Centre.

"As leaders of secondary and post-16 education on the Island, it is not our place to comment on or provide a public view about the policy decisions taken by the States of Deliberation. However, what is absolutely within our area of responsibility is the welfare of our students and our colleagues, who have had to endure so much uncertainty in recent years. Arguably, it would be remiss for us to remain silent while further debate continues, despite the States’ decision, about whether the reforms should be delayed and revised, or even reversed.

The impact of delay

"We are two years into a five-year transition process, as we seek to implement the States’ direction. We consider it essential that the whole community, and its leaders, are as informed as possible about the impact of any delay, especially the impact on our students.

"Following the removal of selection, it became imperative and is now increasingly urgent that the secondary estate is consolidated into fewer schools. This is primarily to ensure we can offer all students the same breadth of curriculum for their GCSE years. Simply, we cannot offer an equal GCSE curriculum to a non-selective cohort across four sites without requiring significantly more teachers to deliver it.

"The transition from the current four secondary schools into the new colleges was deliberately constructed to minimise negative impacts to students. Not only would further delay or changes create uncertainty for all children who currently know where they will be taught and until when, as do their parents and carers, the transition plan is tied into the phasing out of selective education, which is already underway. 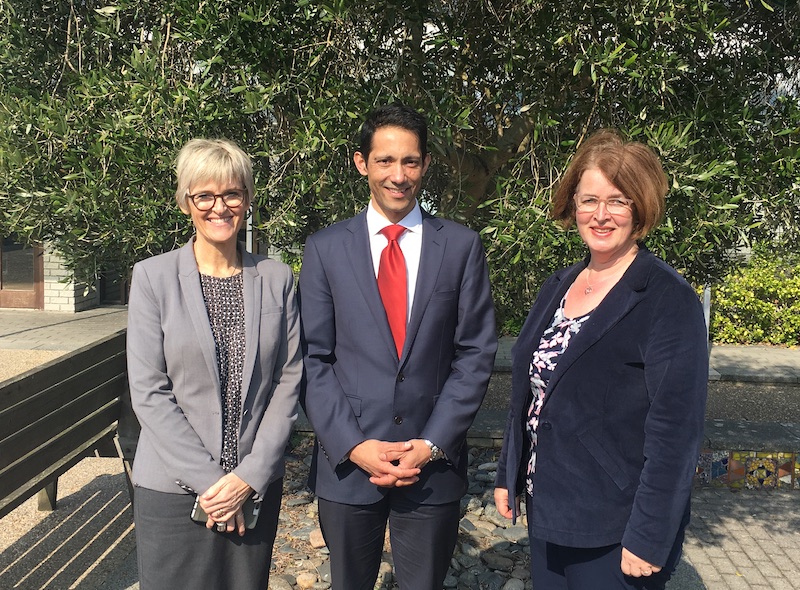 "The first non-selective cohort, currently in Year 7, are set to move to the new de Saumarez and Victor Hugo Colleges in September 2022; in time to start their GCSEs in Year 10. From this point onwards, all students will be able to access the curriculum breadth necessary to meet the wide range of needs and aspirations of students in a comprehensive cohort. However, any delay to the reforms would mean our current Year 7 students would be denied access to the broader range of GCSE options they’ve been promised. This would be a more significant problem for this cohort than for the cohorts preceding them, as there is a broader range of ability across the non-selective Year 7 within each school.

"Additionally school leaders, on whose advice the transition model was developed, would be faced with making other complex choices, with none of the options likely to be attractive to affected students. Delaying by a year would also require a decision about whether we run with just a Year 13 as the last cohort of the Sixth Form Centre, or split the Year 13 cohort between the two new colleges following Year 12. Unpalatable choices such as these do not feature in the current transition plan.

"We have fantastic and dedicated staff and although we have seen no real increase in the number of staff leaving our schools, prolonged uncertainty may have an impact on retention and make it increasingly difficult for us to recruit. Headlines generated here have an impact on how the best candidates view us from the UK and internationally. Any delay or threat of delay, makes it that much more difficult to recruit. Teachers and their families would find it difficult to move to Guernsey with prolonged uncertainty about the future.

"Equally, the impact of delay on students and colleagues in the post-16 sector, undertaking or delivering technical, professional and vocational studies, cannot be understated. The current College of Further Education sites at Les Ozouets, Delancey and Coutanchez campuses are far from satisfactory and a significant part of the total capital funding approved by the States in September 2019 will transform the Les Ozouets site into a facility worthy of our new Guernsey Institute. Aside from the capital required for the build for the Guernsey Institute, the plans to fully integrate the College of Further Education, the GTA University Centre and the Institute of Health and Social Care Studies are already in progress and any delay will impact staff across all three existing organisations. If the States chooses to pause the implementation of the reforms, or alter them – which may ultimately lead to their reversal – the long-overdue creation of this new organisation and the much-needed new facilities for its students and staff would also be called into question or, at least, delayed.

"Passionate debate is common in Guernsey, especially in relation to education; as senior leaders, we have often been at the centre of it. Our aim has always been, and will continue to be, to provide the best possible education for Guernsey, in whatever educational model is directed by the States.

"This aim is no different during transition, which is, and was always going to be difficult. This is why we want it to last no longer than necessary and why continuing to implement the reforms in a timely way is, in our view, so important. Of course, given complete freedom, the exact way each of us might have chosen to re-structure the education system to achieve the best outcomes and equality for all students, within our means, would have likely differed. However, we recognise, after years of uncertainty, that the decision has been made and is being implemented.

"This is not to suggest that significant challenges do not exist - challenges which must be overcome before de Saumarez and Victor Hugo Colleges are at full capacity in September 2023. It is important to recognise, however, that not all of these challenges must be resolved today. There is much work to do and we have the time, drive and determination and the stability to do so. 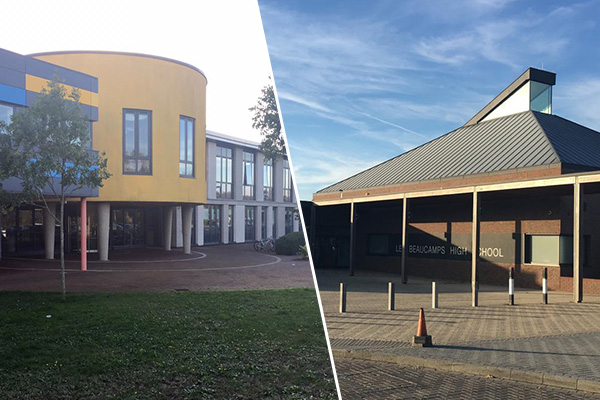 Pictured: St Sampson's and Les Beaucamps school sites will be used to create the Victor Hugo and de Sausmarez Colleges under the current plans.

"We have been listening; and a significant amount of work is being done to amend the plans for the two college sites, wherever possible, following feedback from colleagues in order to address some of the matters raised. This includes the creation of extra library and self-study space at both sites and exploring options to see if it’s possible to secure additional land for recreational use at the Les Beaucamps site.

"While we recognise that many islanders feel comparisons to England are unhelpful in a Guernsey context, we believe it is worth highlighting that the plans will create colleges that are considerably larger than would be the case for schools in England with a similar number of students. This includes significantly more space allocated for the support of students with special educational needs and disabilities including communication and autism support bases on both sites.

"As education leaders, we would always be able to suggest ways additional spending could be beneficial. It is always possible to add more, and lots of the suggestions made by the teaching profession involve doing so. However, there is no consensus amongst staff about what should be prioritised, or even whether some of the additional areas suggested are desirable. It is simply impossible to say “yes” to every request because choices and changes have consequences and, nearly always, associated costs.

"If, in time, more money can be allocated to add to the colleges, we would certainly be in favour of further development. We would prefer money to be spent in this way rather than going back to the drawing board to develop yet another model, which, unless funded much more generously, would be likely to generate similar opposition as this model has amongst some of our colleagues and within the community.

"Guernsey has spent too long rejecting education plans whilst leaving students in buildings which are inadequate and in schools which are too small to offer a broad curriculum, with inequality built into the system.

"Should there be a further delay, there will be no winners. The current uncertainty is the cause of much anxiety, tension and wasted resource. We like everyone in our profession, the politicians and the wider community, care deeply about the welfare and best interests of children, young people and students and keep them at the centre of our decision-making. There is still much to do but we also have a duty to protect staff so they can focus on the needs of students under our care today, while making sure colleagues remain part of planning for the future too. 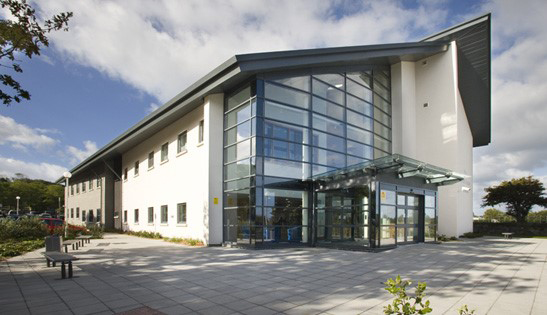 Pictured: Islanders who favoured selective education are being asked to accept the decision made by the States to abolish it earlier this term.

"Guernsey cannot continue to be paralysed by indecision while seeking the Holy Grail of a model for secondary and post-16 education which can gain unanimous support, gives everybody exactly what they want, and at a price that the States and taxpayers are willing to pay: that particular model simply doesn’t exist. We must do the best we can, with what we can afford, to benefit as many students as possible, and do so as soon as possible.

"Whatever comprehensive model you might have preferred originally, or if you would prefer to return to selective education, we all now need to get on and see through the decision made by the States and, in so doing, provide the best secondary and post-16 education possible. We are trying to build an educational community and can do this so much more effectively with your support."

The above letter contains the words and views of the educationalists named at the top of the story.

Posted by Mary Guymer on Jan 16th, 2020
The problem stems from the initial consultation asking the public what they wanted which was ignored as ‘the wrong people answered it’, A three school model with an 11+ opt in option so bright children could still attend the Colleges could have worked, and could have been completed within the time scale.
Two huge schools are the worst option
To place a comment please login Login »