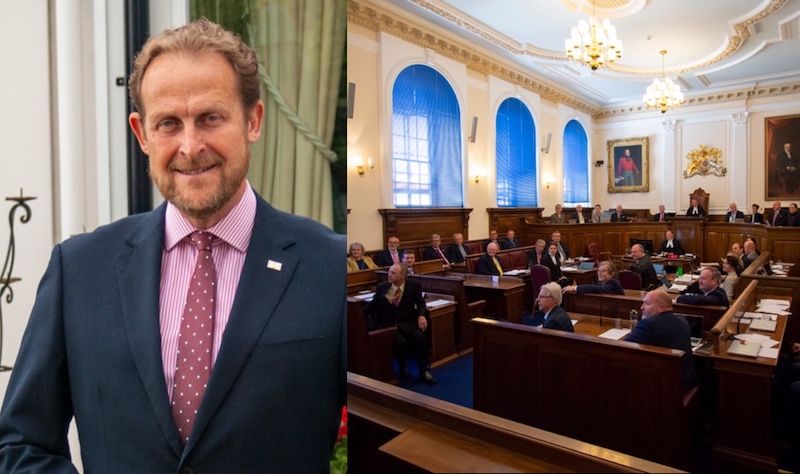 Most of the questions about Paul Whitfield's departure from the States - directed by Deputy Gavin St Pier to Policy & Resources President Peter Ferbrache - were not answered. The reason given was that the States does not comment publicly on individual employment matters.

Mr Whitfield’s immediate departure was announced on 26 August by P&R, with Deputy Ferbrache saying the Committee "recognised the need for a change in senior leadership and have taken action to bring this about."

Mr Whitfield had just returned from a "relaxing" family holiday when he was ejected from his role, which he had held for eight years with a ten-year plan to reform the civil service.

Have submitted questions ahead of next week’s States’ meeting in connection with sacking of Chief Executive. There is likely to be a significant cost to taxpayers; and there are legitimate questions to ask about whether followed due process (which helps mitigate financial cost.) pic.twitter.com/9TMdj42Bkx

Pictured: The questions above were put to the President of Policy & Resources yesterday.

Requests from Express for how much it has cost the States and the circumstances behind Mr Whitfield's departure have been rejected, as have previous requests for more information from some deputies.

The latest set of questions - from Deputy St Pier - asked about the process that was followed, whether any legal counsel was sought before 'terminating' Mr Whitfield's employment, and any settlements or non-disclosure agreements reached with the former States CEO.

In each case, the response from Deputy Ferbrache was that: "As a matter of standard practice, the States of Guernsey, in its capacity as ‘Employer’, does not comment publicly on employment matters concerning individual members of staff."

Deputy St Pier attempted some supplementary questions - which, according to the rules, must arise from the answers given.

The Bailiff Richard McMahon overruled many of the additional, re-worded attempts for information, most of which were generalised versions of the Whitfield-specific questions.

The questions, did, however reveal some extra morsels of information. Deputy St Pier re-framed his first question, asking if any costs incurred in terminating the employment of a member of staff, in line with best corporate practice, would be disclosed in the States of Guernsey’s annual accounts.

The Chief Minister said he would be "surprised" if the termination of any States employment contract was not subject to a confidentiality agreement between both parties.

"It will depend on the nature of the agreement," Deputy Ferbrache replied. "Most employment contracts when they are terminated, parties come to an agreement, and they are sometimes subject more often than not to a confidentiality clause.

"If they are not, a) I would be surprised, but b) it would seemingly fall within the view of the question asked by Deputy St Pier." 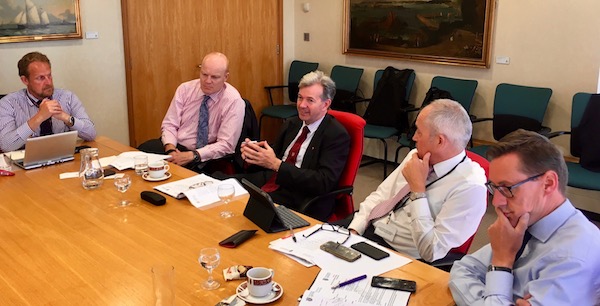 Pictured: Deputy St Pier worked closely with Mr Whitfield during his time as President of Policy & Resources. The pair are captured here with their Jersey compatriots at the time.

Deputy Ferbrache was also asked whether authority for termination of employment had been delegated to a single member of the P&R Committee.

"The Committee has always acted properly. Deputy St Pier, without casting any aspersions on his integrity of course, is seeking information on the questions which I have already answered the best I can."

Mr McMahon told the former P&R President that other questions put to Deputy Ferbrache "can potentially be dealt with by another set of Rule 14 or Rule 11 questions next time round."

The questions in full:

2. Was any formal legal advice sought and obtained from the Law Officers before the termination of the former Chief Executive’s employment?

3. What process, if any, was followed by the President and/or the Committee in terminating the former Chief Executive’s employment?

4. Did the Committee formally resolve to terminate the former Chief Executive’s employment before his contract was terminated?

5. Has a settlement been reached with the former Chief Executive following the termination of his employment?

6. Is the Committee seeking or has it obtained agreement for non-disclosure provisions in any settlement with the former Chief Executive?

Posted by Ken Smith on Sep 30th, 2021
Back room deals with confidentiality agreements with our money is exactly why we should NOT have tax increases until they stop treating our cash like a cookie jar.
Too many Civil Servants making too much money at the top for doing too little.
To place a comment please login Login »