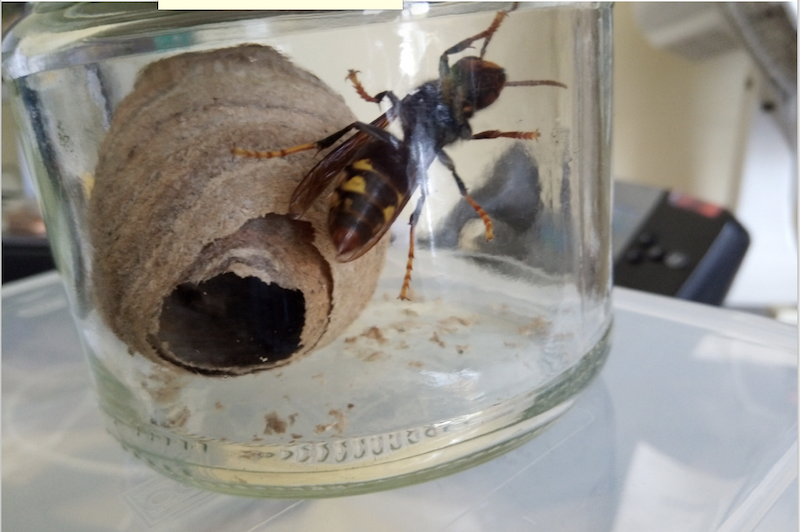 An Asian hornet primary nest has been found in Guernsey, at a residential address off Vale Road.

This discovery is the first recorded sighting of a primary nest since Asian hornets were first identified in the island in March 2017.

Damian Harris, Field & Research Officer for the Asian Hornet Strategy,  said the homeowner only became aware of the nest when she saw a large insect flying towards her under the roof of her porch.

The nest, which is about 2½ inches by 6 centimetres in diameter, was made by an Asian hornet queen that could have emerged from hibernation after overwintering here or, more likely, was a new arrival coming in from France or possibly Jersey on favourable winds.

“This was the first primary nest found on the island and it was surprising how large it was compared to a queen wasp’s nest at the same stage. It was about the size of a light bulb whereas wasps nests are golf ball size or smaller," said Mr Harris. "The location was also unexpected as they tend to prefer a sheltered site within a shed or out building; this was attached to an electric junction box about 7ft above the front door, sheltered from the rain but exposed to the wind.

It is estimated that the nest had been there for around 3-4 weeks as it was quite well developed and contained 6 small larvae and 11 eggs. If left undetected it is highly probable that the solitary queen Asian hornet would have continued egg laying and feeding the larvae until she had raised a small brood of worker hornets by the end of June. After this time the queen and workers would relocate to build the large main nest, often high up in a tree.

These large nests expand rapidly during August-September and can hold up to 5,000 hornets. 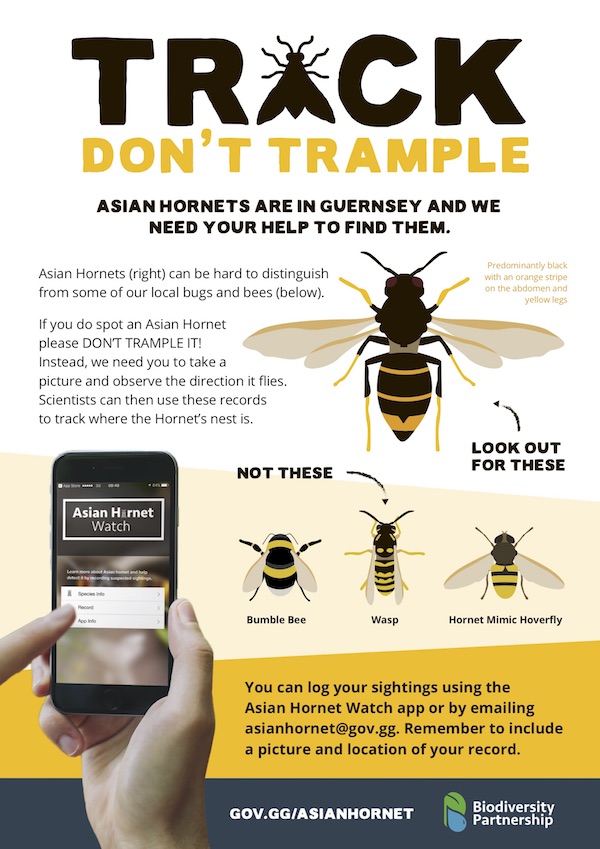 Francis Russell, Project Coordinator for the Asian Hornet Strategy, said that, if left uncontrolled, Asian hornets will present an increased risk to the public as well as causing significant harm to our native insect populations, such as bees.

“We cannot emphasise enough the important role played by members of the public in reporting potential Asian hornet sightings as well as looking out for small nests made by the queens at this time of year," he said.

"We would ask people to check out the ceilings of their outbuildings, sheds and porches in case there are more of these early nests. Our aim is to ensure that we can keep the populations of Asian hornet as low as possible, to protect public health and the Island’s biodiversity. We are really encouraged by the number of reports we have received this year and can be contacted on asianhornet@gov.ggor phone 234567."