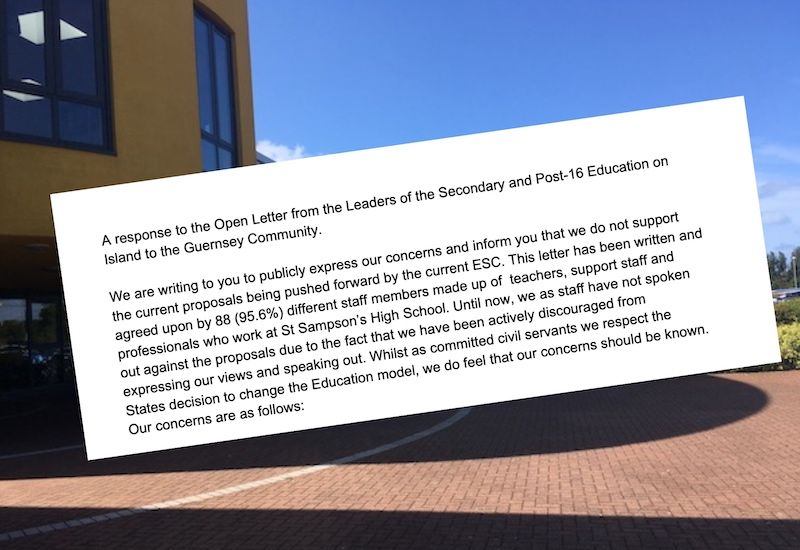 That equates to 88 people - currently working as teachers, support staff and other professionals - at the school which is earmarked to be expanded and rebranded as Victor Hugo College once the Lisia School model is fully implemented.

The open letter, which has not been signed but was emailed to the media with an assurance that Deputy Peter Ferbrache has verified the identity of the 88 people said to back it, can be read in full HERE.

Those behind the letter have said it is in response to the open letter published by the Executive Leadership Team and other Headteachers. That letter can be read in full HERE. 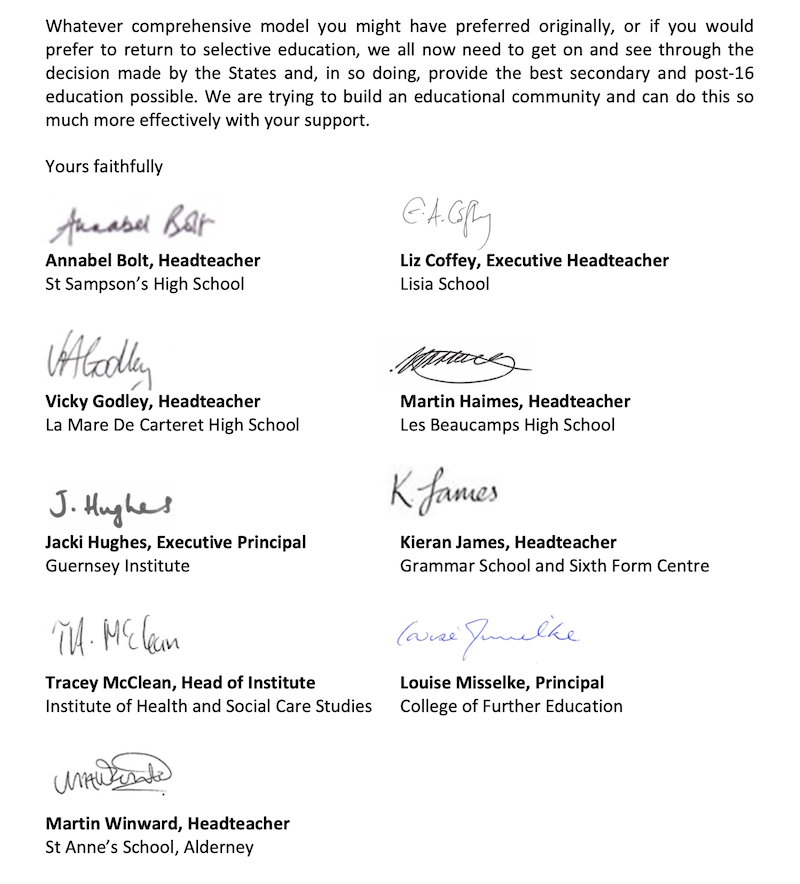 Pictured: The island's headteachers all put their names to an open letter on the subject of secondary transformation last week.

That letter was issued publicly, with a plea for everyone to unite behind the transformation of secondary education, saying that "whatever comprehensive model you might have preferred originally", "we all now need to get on and see through the decision made by the States and, in so doing, provide the best secondary and post-16 education possible."

The island's headteachers all put their names to it, with the Lisia School Executive Principal, Liz Coffey, the two designate-principals of the two college sites, Keiran James and Vicky Godley, and the headteachers of the island's other secondary and post-16 educational facilities among them.

However, after months of rumoured dissent from teaching staff across the island's secondary schools, 88 of those staff, all based at St Sampson's High have now publicly said they do not have faith in the system those headteachers are publicly backing. The 88 say they support the expected requête, being lodged by Deputies Andrea Dudley-Owen and Rob Prow this week, which is likely to call for a 'pause and review' before any more work on the transformation of secondary education is done.

"We are keen and ready to support the ESC and Education Department in the transition to a new model of education which engages all our island’s children, offers them the widest range of educational opportunities and ensures the highest outcomes," say the 88. "However, we do not feel that the proposed plans as they stand meet those objectives. We feel that more work on the transition is necessary and recognise the concerns of the community for what has been seen as a rush to complete this process before the next election."

Responding to claims that a delay would be harmful at this stage, the 88 say forging ahead without some changes being made could in fact be "calamitous".

"In conclusion, whilst we agree with the Executive Leadership Team that delay and uncertainty are difficult, we strongly feel that to continue along the present path without pause for reflection and improvements to the current transition model will lead to a calamitous result for education and the island as a whole. We therefore ask all Deputies to support the requete to allow time to ensure the best outcomes for our young people."

The areas of concern the 88 staff have raised cover:

In summary, the 88 said "staff are extremely frustrated with the lack of meaningful consultation.

"Opportunities for staff to approach those behind the plans are irrelevant as staff feel unable to voice their concerns or are consistently dismissed. It is felt that there is very much a 'divide and conquer' atmosphere at present, and there is a lack of consistent, transparent communication which is causing a culture of distrust. At the root of teachers' career choices is a desire to provide excellent education for students - any concerns that we have reflect that, and yet are being treated as though they are just an effort to be troublesome.

"We have composed this letter to request pause and reflection on the current proposals. ​There is no guarantee that Education will improve and Deputy Matt Fallaize has admitted that he does not know how long it will take for exam results to improve if the current proposals are implemented. This means we will be playing with the future of many of the young people we teach whilst the model embeds, if indeed it does."

To read the letter from the 88 in full click HERE.

To read the letter from the headteachers on the transformation of secondary education click HERE.

Deputies Carl Meerveld, Andrea Dudley Owen and Rob Prow are expected to lodge a requête this week, calling for a 'pause and review' before any more work on the transformation of secondary education is done.

A draft version of the requête has been published and can be read HERE.

To read a statement from Deputies Meerveld, Dudley-Owen and Prow click HERE.

To read a statement from Deputy Matt Fallaize in response to the proposed requête click HERE.