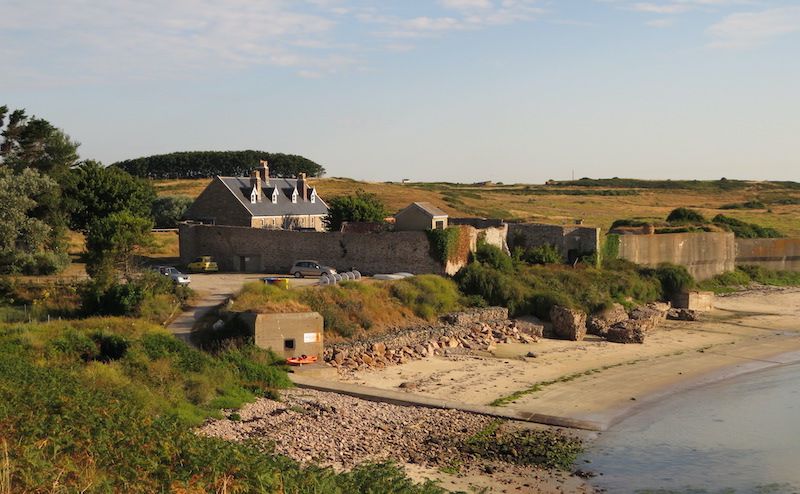 A team of history enthusiasts are recommencing their excavation of "Alderney's most fascinating building", the Nunnery, in the hope of learning new answers to the site's many outstanding questions.

Dig Alderney has returned to the Nunnery to continue its excavation of the site and assist in its interpretation.

"This is a complex site to understand given that it has been almost continuously occupied for 1,700 years and remodelled by successive occupiers," said Dr Monaghan.

"Damage to the Roman fort walls was made good sometime in the late Middle Ages and new buildings were constructed by the Tudor period when it was the home of the Governor of Alderney. Further buildings were inserted in the 18th century.

"The whole interior was demolished and levelled up with sand and rubble by British Army engineers circa 1793 before the current barracks, guardhouse, magazine and carriage store were built. Another building stood in the courtyard in Victorian times, possibly a hospital."

Pictured: The area for which permission has been given for excavation. Time and resources will not permit work on all these sections this season. The remaining areas will be investigated as a second project, provisionally booked in for Spring 2022.

He continued: "Around 1906 the buildings were converted for use by military families and the earlier ramparts buried. The Germans extensively refortified the site as Resistance Nest Piratenschloss during the Occupation.

"Add a multitude of drains and 20th century utilities and there is a lot to pick apart beneath the surface. We do not know if it was ever, in fact, a Nunnery."

The five sections that Dig Alderney plans to investigate further are as follows, explained in their own words:

The ‘sun room’ is due to be demolished under archaeological supervision. This is one of few locations in the Nunnery not disturbed by the Germans or cris-crossed by utilities. It therefore holds the potential to help understand the history of the site after the Romans left. The primary aim is to reveal the juncture of the Roman south wall with the replacement east wall, whose date is unknown but assumed to be medieval. This may help establish when the east Roman wall fell onto the beach and at what point the damage was made good. We are interested in the nature of the rampart built behind the wall in the Middle Ages and/or during the refurbishment of the fort under the Tudors. There are suggestions from the Bastide Map drawn in 1739 (above right) that there was an inner wall. There may also be remains of a wall walk dating from the 1793 refurbishment.

Magazine frontage (Area B) Trench 6B

The Magazine was built c.1793 utilising the extant Roman tower wall as its north perimeter and the gun ramp as its south perimeter. There was possibly an internal rampart facing wall on the east side and a blast wall to the west. The magazine was partly buried on the north and east sides by the sloping earth rampart added c.1906 and it was converted to a water tank at a date that is not precisely known. A trench here (probably leaving a baulk to access the room) will be a southern continuation of the 2010 Trench 6. At the north end it would expose the exterior of the south wall of the Roman tower, which has not yet been seen. It may also expose the unknown building shown on the 1739 Bastide map, which could date to the Tudor occupation of the fort. It should confirm whether there was once a blast wall built to the west. It may also shed light on the construction of the ‘gun ramp’, which appears to have been built in two stages and originated before 1739.

The removal of trees and flowerbeds in 2020 has opened the potential for excavation in this area as an eastern extension of 2010 Trench 6. It aims to reveal the inner face of the Roman south tower wall and discover whether there is any remaining internal structure or floor. Remains of the Tudor occupation of the tower could also be found – in 2016 a cobble floor in Trench 8 was found in the doorway of the tower. The trench will examine how the Germans inserted their bunker through the archaeology and allow a structural inspection of the bunker and interior of the tower wall for any damage caused by roots of the trees or other flowerbed plants. We may also discover more of the drain that runs seawards from this point we currently assume is Tudor as it was probably cut through by the Germans.

The remains of a square building can just be seen beneath weeds and rubble in the NE corner of ‘the Garden’. We suspect this was a short-lived structure constructed in the Victorian period but are unsure of its actual date and function, although it may have been related to the privvies. The exterior was investigated in Trench 13C in 2012. Opportunity will also be taken to examine the junction of the Roman east tower wall with the medieval repair wall at the NE corner of this building. There is evidence from the Bastide map that an earlier building stood here before 1739, but its remains are not expected to be found.