Overseas rubbish washes up on our shores; rare finds in amongst it 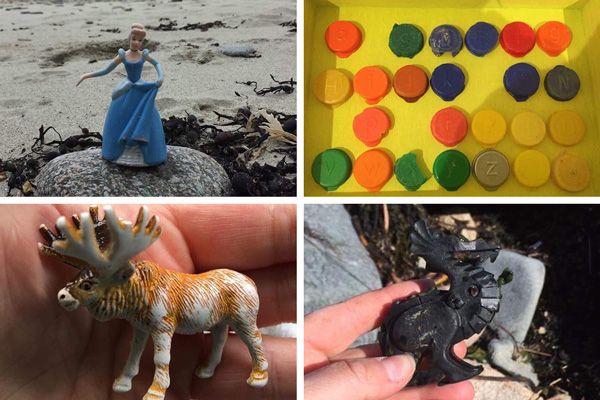 Overseas rubbish washes up on our shores; rare finds in amongst it

Guernsey's beach cleaners have recently been finding litter from the other side of the world on our coastline.

Water bottles and a WD-40 can, amongst other items, have been found washed up, after originating from places as far away as Asia.

Local Marine Biologist Richard Lord, who is heavily involved in monitoring the litter that washes up on the island's shores, said its unlikely the items came from the other side of the world, but were more likely to have been dropped into the sea by merchant vessels.

How does one explain these two plastic bottles collected from strand-line of a Guernsey beach (left one from Malaysia)? @EU_Commission @Emma_Priestland @SeasAtRisk @mcsuk @RaceForWater #PlasticsStrategy Can only think that these bottles were discarded at sea from a ship. pic.twitter.com/zmbRH5qrrq

"Guernsey is very close to lots of large shipping lanes, so we have got things washing up from all around the Atlantic Basin. We get stuff from North America, and a great deal of nylon fishing ropes and gear for example, but we don't believe these items from Asia come from land sources," Mr Lord said. "There are International Maritime Organisations, NGOs and regulatory bodies who want ships to bring their waste into port and dump it all there, and ships are not allowed to just throw their rubbish over the side, but there are obviously always some people who might not follow these rules. I have found a Chinese shoe - a toe protected shoe - and it was the type that you would see on a merchant ship."

Mr Lord added that he alone probably collected around 600kg of rubbish a year from beaches, and estimated that including all of the people who participate in beach cleans around the island there would be tonnes of waste collected annually.

"In the summer when it is warmer, we get less washed up on the beaches because it isn't as stormy, but then we face the different issue of more locals littering as they use the beaches more. We have all got a responsibility to deal with maritime littering but it is an international issue."

Mr Lord is also part of a local beach combers group on Facebook, who clear up litter and also search for collectibles that have been washed up on the shore. The members of the group Found on the beach in Guernsey post their findings in albums and many of them also catalogue the litter.

Sam Reoch is the head admin of the group, and said she decided to create it while she was picking up rubbish on the beach herself.

"I wanted to raise awareness for the problem of litter and the dangers it caused, as well as making it fun by including information on collectible items, items with history, sea facts etc," she said. "I love beachcleaning as I like to do my bit for the environment while ‘treasure-hunting’ for interesting items that wash up. I particularly like historical items and items that bring back memories of my childhood - like a Noddy toothbrush handle and animal figurines.

"I have always been a huge fan of the wombles, the message of ‘making good use of the things that you find’ is more important now then ever in this disposable world, so It’s lovely when we can reuse or recycle."

More of the items that Mrs Reoch and her fellow "beach womblers" have found can be found on their Facebook group.

Applications for this year’s Eco fund are now open