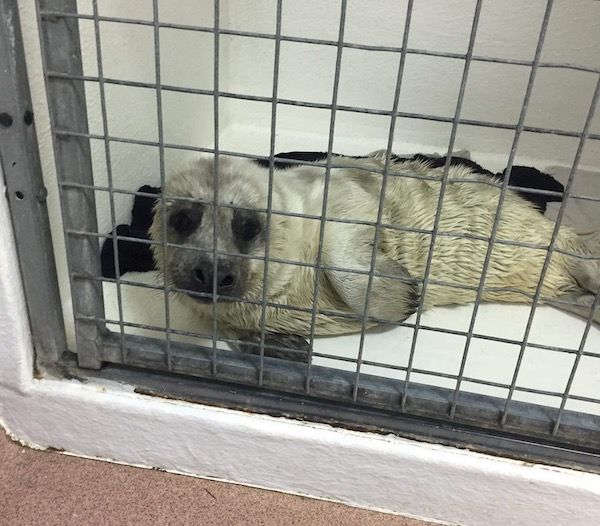 A newborn seal pup is now in the care of the GSPCA having being found "exhausted" on Plèmont beach in Jersey.

It is believed the pup was separated from its family by a huge swell. It was first spotted flailing around at sea by surfers, before swimming to shore and being found by a family who contacted the JSPCA.

The pup’s sex has yet to be determined, but it has been named Ellie, after the person who found it. It weighs only 16kg and has not yet shed its newborn white coat, indicating that it is still very young.

“The temporary white coat is not waterproof, and pups this young should remain on land if possible until they moult this coat,” said GSPCA Manager Steve Byrne. “Sadly, it is likely this pup was washed away from mum with the huge swell. This means it would likely have not got the vital fatty rich milk from mum, which is essential for the first three weeks of a pup’s life.”

The team at New Era Vets in Jersey cared for Ellie for two days, giving the pup a health assessment and vital fluids before transporting it to the GSPCA’s specialist facilities. She joins Joey, whose recovery is going well, according to Head of Marine Mammals Geoff George.

With two seals, over hundred hedgehogs and hundreds of other animals in the care of the shelter, Mr Byrne said that the charity can expect a "busy festive period".

“We have a record-breaking number of wild animals and birds through our care,” he said. “We now have two seal pups at the shelter, and both being so young, they have a long road before we can even think of releasing them back to the wild. Poor Ellie is very young and thing, and Geoff and the team will be ensuring she has around the clock care.”

Pictured top: Ellie the seal pup was found separated from its mother in Jersey, before being brought to the GSPCA for specialist care.

Keeping your pets safe this Christmas