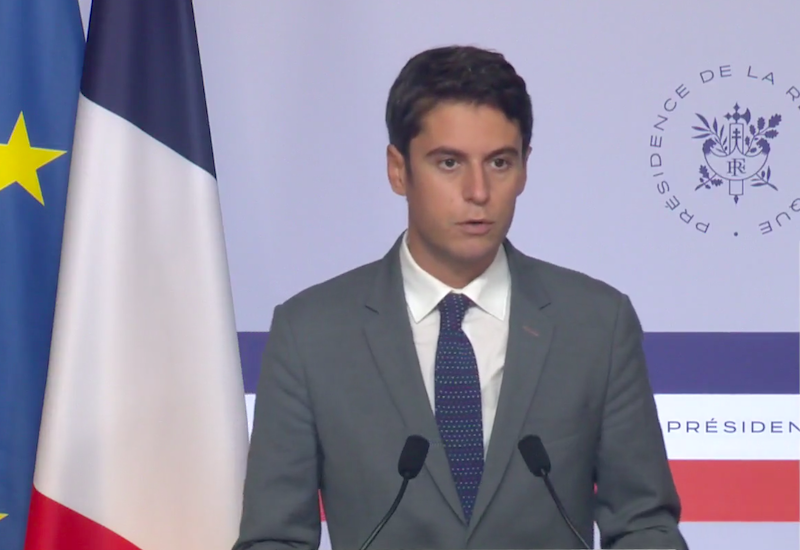 France's Government has abruptly announced plans to block British fishing vessels from its ports and issued a threat of imminent electricity cuts within the next week.

The ongoing power struggle - which has centred on France's strained relations with the UK and Jersey - appeared to be improving, with plans to make a “positive” joint announcement with Jersey just hours before the country's government blindsided its neighbours.

French government spokesman Gabriel Attal announced from the Elysée Palace that "retaliatory" measures would start from next Tuesday in response to France not getting the number of fishing licences it requested.

He said they will include a ban on the landing of seafood from British fishing vessels into designated French ports, and the “strengthening of health and customs controls, systematic safety checks of British ships and the reinforcement of controls on lorries to and from the UK”.

He added that there will later be a second set of reprisals that “would include, among other things, energy measures that will affect the supply of electricity to the Channel Islands.”

Video: French government spokesman announces some of the retaliatory measures at the Elysée Palace on Wednesday.

Brexit Minister Lord David Frost said that the threats appeared to be incompatible with the Brexit deal and "international law".

He added that No 10 stood by the Channel Islands, and that the UK Government was "considering what further action is necessary", vowing an "appropriate and calibrated response" if Paris follows through with its threats.

Reiterating its position in May, when French Minister for the Sea Annick Girardin first threatened to cut Jersey’s electricity supply, Jersey Electricity said were its French supply to be disrupted, the island could generate its own power.

The same guarantee has recently been given by the States of Guernsey, which said that the island "has good resilience in its supply strategy that provides for continuity should there be any issue with energy supplied through the cable from France, via Jersey.”

There is a contract with French government-owned company EDF until 2027, so it is not known how that commercial arrangement could be altered without the French incurring significant penalties.

Back in September, Jersey announced that up to 95 small boats could be given a licence, while 75 boats were deemed not to meet the island's criteria nor come anywhere close to it and ordered to stop fishing around the island and its reefs by the end of October.

A final decision of Guernsey fishing licences has yet to be made with officials "continuing to work closely" with their French counterparts in recent weeks.

It's understood that, following further discussions, Jersey and the UK have suggested that more vessels could receive a licence than initially indicated.

Despite this, M. Attal said at the Elysée press conference on Wednesday that France remained furious.

“You know that over the last few weeks, France has adopted the toughest stance in its discussions over fishing licences with the United Kingdom," he said.

“The matter is clear and we’ve said it, we will not let Great Britain wipe their feet off the Brexit deal that has been reached.

“We started working with the British: we provided all the data, all the documents, all the information that were requested to support the applications.

“What we find now is that almost half of the licences which we were entitled to are missing. This situation is unacceptable, and I say that very clearly, our patience has run out today.

“This is why a number of meetings have been taking place within the Government to set a number of measures that could be enforced."

Video: Mme. Girardin posted a video of a conversation with the EU Fisheries Commissioner in which she lamented the state of progress earlier this week.

He continued: “I want to be clear that, in accordance with the treaty, the first step we took was obviously to contact the European Commission, which has the competence to ensure sure the agreements that have been reached under the Brexit deal are being respected.

“Then, there are measures that we can take at a national level. Over the last few weeks, meetings have taken place within the Government to come up with a list of measures.

“There was an important meeting attended by the Government with local elected officials, presidents of region, presidents of departments and mayors of the regions of Haut-de-France, Normandy and Brittany, to discuss this with them.

“We presented the measures we intend to take. We also asked them about and discussed the measures they could take themselves as part of their regional partnerships, as of course those communities have links with the United Kingdom and can also take measures.

“In practical terms, we are going to announce a detailed list of measures we will take, if there is no change in policy over the licences we are entitled to by next week, obviously.

“Those measures will be detailed either Thursday or Friday in a very clear list but what I can already tell you is that there will be two big sets of measures.

“A first set of measures will be enforced from 2 November, gradually over several days, that will affect produce imported and landed in France, in our ports, with for example systematic custom checks and health inspections on the imported produce landed in Manche ports, along with a ban on landing sea products in our ports, and checks on lorries; this will be the first set of measures.

His words were later followed by a statement on behalf of Mme. Girardin's Ministry, which reiterated M. Attal’s points.

It added: “The [French] government maintains its wish to move forward with the United Kingdom in resolving these difficulties linked to the application of the agreement and awaits concrete answers within a few days, both for the Channel Islands and for the six to 12-mile limits.”

Guernsey's 'down to earth' version of Real Housewives of Jersey

In Jersey, politicians may have to declare their relatives' interests